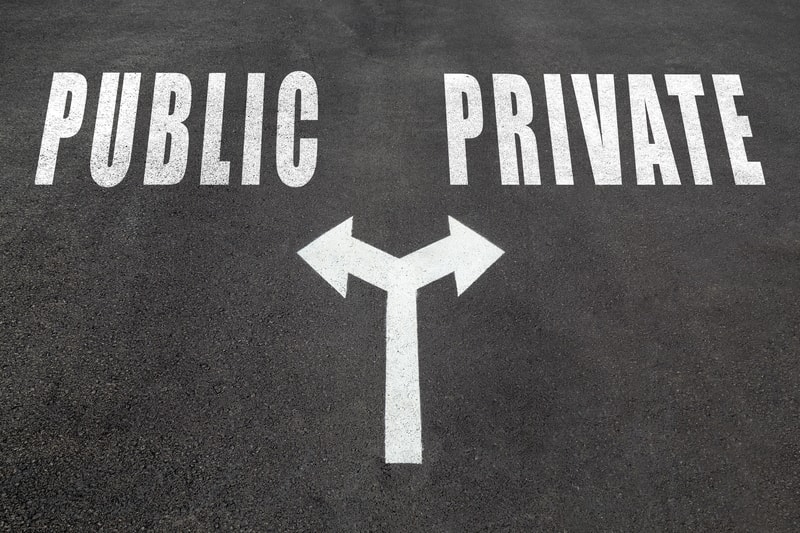 As odd as it sounds, the debates on the topic of “what is better: public vs private blockchain” are yet underway.

The reason people still cannot agree on common opinion lies in the fact that most of the argues are not supplemented with clear definitions concerning the technology and methods of its application. This has led to some misconceptions about blockchain.

The public views are too heavily dependent on the subjective “As for me, I consider that… ” opinion leaders’ ideologies.

Especially, when we speak of the technology that’s less than 10 years old.

In reality, the problem is in the very posing of the question. It’s not a matter of “good or bad”, but — “suitable, not suitable”. To wrap things up, let’s compare the “two blockchains” based on objective facts and properties that technology may give.

It’s not public and private. It’s permissionless and permissioned

Taken out of context, you, in fact, can call one blockchain public, other — private. And it’s not fundamentally wrong; it’s just too abstract. But since we’ve decided to gain a precise understanding of the situation, we need to go to a lower level of perception: from superficiality to specificity. That’s why, further in the article, we’ll forego the “public and private” wording and keep on with “permissionless and permissioned”.

Sometimes people claim that public blockchain is permissionless and private is permissioned. Seemingly, the logic goes that way … But, it’s not that. Otherwise, how would you explain the essence of a public permissioned blockchain?

The permissionless parameter means that you can participate in a certain process of the system without any restrictions and limitations. You don’t need permission.

If a certain system claims to be permissionless, it is obliged to have every single process in its accounting opened for all.

Bitcoin is a good case in point: every single person can store assets (BTC coins) in the accounting, transfer them and so be the validator (participate in decision making of the system). No one holds the ultimate reins explicitly considering any of the ongoing processes in Bitcoin.

Even the upgrade decisions are taken mutually by the community. Such a system doesn’t have any privilege levels, to be precise, only one — common to all.

Ripple is an example of a permissioned blockchain. It’s the case when the accounting itself is opened to the public, meaning that everyone can store assets, transfer them, even see the transaction history, though the validation is permissioned. Only designated parties can participate in this process: partner banks, private parties (large ripple holders, for example), someone from the community of the Ripple project, friends’ friends, etc.

Sometimes you have cases when all the processes in the accounting are permissioned.

That said, you have to be a designated party to be able to make use of the functionality of the system, not to speak of the validation process.

This makes sense in cases when, for example, some private companies want to build the payment channel that would allow them to conduct transactions without third-parties.

Blockchain may allow for that, while it’s apparent that they wouldn’t be building Bitcoin. Instead, they need a private network that would allow for the settlement exclusively between the companies that are involved in the commercial process.

In this way, they would make a permissioned (private) blockchain, where you need specific permission to participate in any of the ongoing processes.

Properties that blockchain may give to various  environments

To sum up, there are two “types of blockchains”: permissioned and permissionless. You already know some examples of their application and may well conclude that both of them kind of make sense.

Still, it’s all an idle talk if we don’t cover the actual properties that blockchain as technology may deliver to various environments. Generally, there are three environments:

Decentralized permissioned. Partial decentralization. The primary processes in the accounting system (emission, validation, upgrade management, governance, etc.) are permissioned, though distributed. The system is not fully accessible, but you have a certain amount of validators (sometimes even independent) who make mutual decisions considering specific processes. That’s the case of Ripple, where emission is entirely centralised, while participation in the validation process implies permission and is done by independent or partially independent parties.

Centralized permissioned. Complete centralization. The control of all the processes in such accounting system is entirely in the hands of one entity that’s responsible for making decisions in it. It is noteworthy that, having a completely centralized blockchain-based accounting system, you can kind of ‘decentralize’ it by granting your business partners with their nodes (servers), so that they could participate in decision-making (of course, only if it makes sense for your commercial relationships).

Now let’s cover some of the principal properties that blockchain provides for.

Generally speaking, it’s the consensus mechanism (not blockchain) that delivers rules to the protocol that allow independent parties to act as a single organism and mutually agree on the changes in the database. Though, it would be hardly attainable without the flexible data alignment that blockchain technology may allow.

What’s this flexible data alignment? The record of all transactions is split into blocks. Validators produce each next set of transactions individually and reach consensus against the following one. This provides for a consistent, robust and effective approach to data reconciliation because it doesn’t require the copying of the finite state of all addresses and unspent coins.

Proof that the accounting system was cheating

The fundamental idea here is that you as an end-user will be having an indisputable proof that you have been cheated (in case it occurs, of course).

That’s a fundamental property regarding the centralized and decentralized permissioned environment because in this cases you deal with a specific entity. The fact that all users will be having proofs of them being cheated is a substantial pressure point for the organization and can, somehow or other, guarantee its integrity.

Though this property doesn’t make any sense in the distributed permissionless systems like Bitcoin, because you cannot blame Bitcoin. It is not managed by an entity that you may try to close down. Neither one can put any pressure on miners of Bitcoin because, generally, they are independent and anonymous.

The way it works

To let users see their payments list or their current balance, the digital wallet has to send a request to the network or, to be exact, to the validators of the network.

Validators, when answering such requests, may also provide the digital wallet with the data about the transactions, namely, whether they were confirmed or not and at which block.

At that, validators authenticate such answers by their digital signature or other proofs. The digital wallet saves all these validators’ assurances about the confirmation of transactions. If at a certain point, the accounting system starts contradicting itself (declare that previously confirmed transactions are now unconfirmed or vice versa), users will have rock-solid proofs that the accounting is indeed cheating.

There again, blockchain stores the history of all changes in the database. This allows for a detailed audit of every single change up to the latest one. More than that, an auditor can at once receive and examine each new block. In practice, that is what can be called a real-time audit.

In future, this approach will allow us to eradicate the tiresome annual auditor checks or other inspections. For instance, if you’re engaged in any commercial activity and you built your database with the blockchain, you’ll be able to help regulators with auditor-nodes (servers), which would allow them to do inspections in real-time and autonomously (at the software level), without being able to alter transactions.

That’s close to the censorship issue. Depending on the environment, the blockchain-based platform may skip users identifications, registrations, KYCs, etc., in this way avoid any restrictions for the users.

Of course, it doesn’t work with a centralized permissioned environment, because there you have a particular organization that governs the accounting system and can easily impose any censorship.

In a decentralized permissioned system, instead of having one validator, you have a certain amount of them, which complicates the possibility to ban users or restrict their actions, because you will have to cooperate with other validators. That’s why the more independent validators you have, the more democratized is the ecosystem for the users.

Eventually, the potential of this property unleashes fully in a distributed permissionless environment, where you have an unknown amount of anonymous validators.

As such, the risk of their cooperation can be minimal, which means that participants are free to decide what is right and what’s not mutually.

No single power may ever try to ban users or restrict their actions. But, there is one critical remark here — in such case, each user takes all the risks and is entirely responsible for themselves.

Well then, take a look at a more detailed chart of blockchain properties and the way they work with the environments where it’s been implemented. 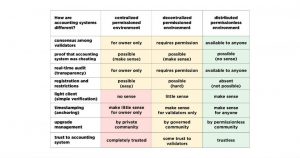 Having analyzed the properties that blockchain may introduce to various environments, we can now with full certainty conclude that blockchain application can make sense in absolutely different cases (and the distributed permissionless is only one of them). 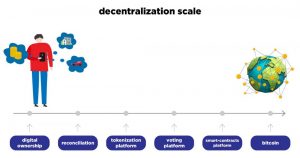 It stands for the reason that in some cases you cannot achieve complete decentralization and independence (as in Bitcoin), because you may have dependencies that neither blockchain nor any other technology will ever replace.

For example, in the case of digital ownership, you always need a particular entity that will be authenticating data about your identity, proprietary rights and so on.

The broad definition of blockchain sounds like that: technology that allows for storing and synchronising data between independent parties (sometimes, they don’t even need to trust each other).

From here, we can conclude that the application field is exceptionally vast because, no matter the sphere or industry, we always deal with specific data that we need to manage.

The technology has some challenges yet to overcome, but the potential is indeed high, and it doesn’t end with the permissionless case. The public vs private blockchain battle is a pure tie game.

Previous article Vitalik unveils his Cryptoeconomics vision
Next article Amazon, Netflix and Google. The tech giants and the blockchain (part 2)

Kravchenko is the Founder of Distributed Lab, blogger, cryptographer and PhD in Information Security. Pavel is working in blockchain industry since early 2014. Pavel's expertise is mostly focused on cryptography, security & technological risks, tokenization. His mission is the creation of an open ecosystem that uses uniform payment and asset management protocol - so-called ”financial web'’.