Guest Blog for The Cryptonomist

A new authoritative market report by a team of academic experts and business leaders from Critical Future reveals that blockchain will have a USD $120 billion economic impacts by 2024.

The research has found that there is significant investment in blockchain from enterprise-level companies. These world-leading brands have the resources, know-how and talent to produce winning blockchain applications.

These blockchain pioneers have the potential to gain a major competitive advantage, operating at unmatched cost and efficiency levels.

Simultaneously, start-ups, investors and entrepreneurs are flooding into the market with new blockchain solutions aimed at disrupting their industries, as the market experiences rapid growth.

The blockchain is a decentralized public ledger, which records transactions between users in a permanent, secure and verifiable way. Blockchain technology can be programmed to record not only financial transactions but anything of value.

Rather Bitcoin is the first manifestation of the blockchain, but it will also soon be pervasive in 44 other industries.

But those effects will go much further than finance and impact almost every other major industry.

WHO IS INVESTING IN BLOCKCHAIN?

The world’s most important companies like Facebook, Walmart and Samsung are investing in the blockchain. Along with many innovative startups, and even governments.

The country of Estonia put all its data registries on blockchain some time ago.

The blockchain is in production use in Estonia’s data registries, such as the national health, judicial, legislative, security and commercial code systems, with plans to extend its use to other spheres such as personalized medicine, cybersecurity and data embassies.

What are the benefits?

Estonia says “millions of lives and resources are saved as the potential manipulation of defence data or smart war machines is prevented using blockchain technology.”

HOW FAST IS THE BLOCKCHAIN MARKET GROWING?

The report has found staggering growth rates. The research reveals that the global blockchain market size will grow from USD $548.2 million in 2018 to USD $10.1 billion by 2024, at a Compound Annual Growth Rate (CAGR) of 62.61% during the forecast period. 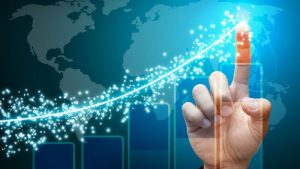 The report reveals that the Asia-Pacific region is expected to show the highest growth rate during the forecast period.

Major economies in Asia-Pacific, such as China, India, Australia, and New Zealand, are investing heavily into Blockchain based solutions. Yet, North America and Europe remain major players in the Blockchain space generating 70% of the revenues in the industry.

But the market size is only half the picture, as blockchain’s real impact is removing costs and driving efficiencies in an industry.

This “Economic Impact” has been calculated for the first time in this report, using an academically robust econometrics model.

The results are staggering with $120 billion economic impacts estimated by 2024, as blockchain carves out cost in major sectors.

Resultantly, companies that effectively deploy blockchain will have a major competitive advantage.

These blockchain pioneers will be able to operate at a cost and efficiency level unattainable to their peers. Hence the investment of so many enterprise level companies in the blockchain, as business leaders see this technology as a critical future differentiator.

Just as digital disruption sent giants such as Kodak and Blockbuster Video crashing into redundancy, blockchain transformation will be equally unforgiving to outdated business models.

THE FUTURE OF THE BLOCKCHAIN MARKET

For Jeremy Baker, a regulator business commentator on the BBC and an Affiliate Professor at ESCP Europe Business School, the report helped him to see the future of the market:

“Reading this report made me realize Blockchain technology introduces a new paradigm. The World Wide Web is merely Internet 1.0 in terms of our online communication.

The blockchain is, in a sense, Internet 2.0 and represents the internet of value, ownership and trust – as the extensive market research contained in this report so clearly demonstrates. 8 out of 10 business people now see blockchain as going mainstream – that is highly significant.” 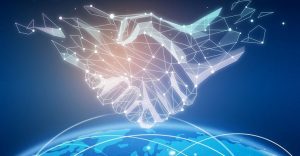 Baker adds: “Reading this enlightening report, it is clear that Blockchain is here to stay. The report made me understand Blockchain’s specific impacts across various industries, in the same kind of way the World Wide Web did. It will have a profound effect on society, as it creates a global network of trust, allowing individuals, organizations and even machines to transact with each other, but — for the first time in history — without having to trust each other.”

More information on the report is available here.

Adam Riccoboni, is the Managing Director of Critical Future