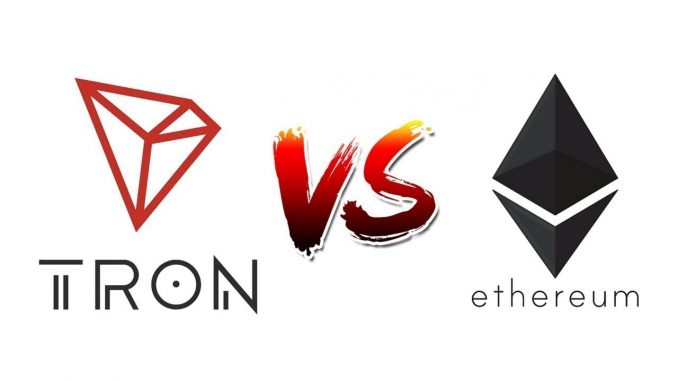 After the record of 1 million transactions in a single day, Tron sets new highs. In fact, the dApps running on Tron’s blockchain outperformed those running on Ethereum’s in terms of number of users, number of transactions and volume. Therefore, to date, we can say that Tron’s dApp platform is the most popular in the world.

The data was published by DappRadar, where it can be seen that it is the gaming and betting dApps the main reason for this rise. In fact, thanks to these applications, Tron’s platform has managed to attract a solid base of users, surpassing even the best-known Ethereum platform.

As for the volumes of the last 7 days TRONbet, with over 27 million dollars, exceeds IDEX which stops at 2.5 million. It should be remembered that the IDEX dApp is an exchange based on Ethereum, while TRONbet is a betting dApp.

Tron’s top 15 dApp list shows that 11 of these are gambling related. The second most popular category is games, but with only three dApps.

One of Ethereum’s limitations could be its scalability, i.e. the ability to handle a significant increase in the number of transactions. For now, Tron seems to be able to solve this problem better than Ethereum, and the above data seem to support this hypothesis. In short, from this point of view, the performance of the Tron platform seems to be much higher than that of Ethereum.

As already reported by Federico Izzi, the growing number of dApps on the Tron blockchain has pushed to increase daily transaction volumes by more than 100 million TRX on the official decentralized Tron exchange. In addition, total capitalization recovers more than 20% from the $117 billion on Sunday afternoon to the current $140 billion.