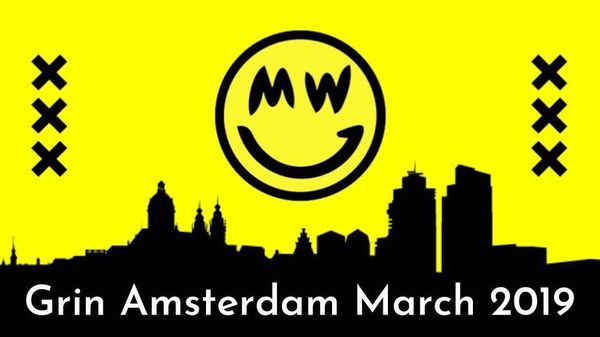 All news regarding Grin from Amsterdam

On 26th of March, in one of the most wonderful cities of Netherlands – Amsterdam, there was a crypto meetup with some big news about Grin.

While it is not so unusual for having such type of events in Amsterdam, having in mind the Dutch and especially their passion for the crypto world, this time everybody started recognising a new face, namely Grin.

As we have shared with all of you via a variety of previous articles related to Grin and the MimbleWimble protocol, this is the new privacy related blockchain which is still in development and work in progress.

Again, it is worth mentioning that its development is completely funded by donations. Behind the project stands a strong team of “magicians” – developers, community members and crypto enthusiasts, who are constantly looking and receiving support and all that is coming to reality just because of the uniqueness of the project.

Grin in Amsterdam: all the news

At the central train station of Amsterdam, where the crypto event took place, came more than 100 people from all over the world. They came to meet in person the Grin core team developers – Michael Cordner a.k.a. Yeastplume, Daniel Lehnberg, John Tromp, Jasper van der Maarel and Quentin Le Sceller.

The event started with a recorded welcome announcement from the anonymous founder of Grin – Ignotus Peverell. If you want to know why it was recorded, you can ask Harry Potter to reveal the secret of his magic. If you receive the answer, please let us know!

The protagonist Daniel Lehnberg, who is originally from Sweden and Greece, kicked off the event by setting the right expectations to the audience. He started with the history and details around what has happened since the first message was dropped in an mIRC chat in 2016. (00:26:00 from the recording below)

MimbleWimble is a new type of blockchain design. It does not have any amounts and addresses on the protocol. Every user is private, which makes the difference, if you compare to other projects. It is an open source community that relies completely on donations. The emission is 1 Grin per second – simple, minimal and elegant.

There were lots of updates about Grin’s development, governance, security, ecosystem and contribution/involvement ways. There has also been an audit which speaks again about the strong commitment

The BIG Brain Michael started briefing the Future of Grin and shared with everybody what is planned to happen along with the high level goals of the project. Michael was explicitly detailed about the privacy, scalability and the importance of being open and transparent.

The 3rd Harry Potter dev. Knight – John Tromp. (check from 00:59:32)  Tromp confirmed: “we were shocked to learn that an asic producer [Obelisk] announced an asic cuckatoo31 with a memory never heard before, half a jig. Even if other producers [Innosilicon] say yes may announce but do not believe it is economically feasible, with these uncertainties I must reconsider the reasoning based on the use of the I / O bottleneck [the use of access to memory to moderate the impact of the asics], and I propose to block the calendar of disposal, at least for c32 and later “

The other two Magical Developers – Jasper van der Maarel (wallet 713) and Quentin Le Sceller participated in the Q&A at the end and answered all the questions that have been raised by the public.

Quentin Le Sceller is one of the committers on the Grin development team. Engineer from Ecole des Mines d’Ales, he later extended his studies with a Master Degree in Information Systems Security at Concordia University. Quentin currently works at BlockCypher where he works on Grin development and GrinMint, a Grin mining pool.

Jasper van der Maarel is a member of the Grin council and the author of the first atomic swaps between Grin testnet and the Bitcoin and Ethereum testnets, based on adaptor signatures by Andrew Poelstra. He is also the creator of GrinScan and co-founder of vault713, an organization that builds open source products that make it easy to store, send and swap Grin.

Wilke Trei, who is a German mathematician with focus on cryptography and algorithm design did also make a short presentation about Memory detail of cuckatoo cycle and how slean mining can help.

At the end of the event there was also a Q&A session moderated by Jonathan Knegtel, who is the founder and CEO of Amsterdam based blockchain intelligence startup Blockdata, helping the world discover and understand blockchain projects.

The event has been sponsored and supported on-site by Bitonic, Lemniscap and 0301.

Over 10+ years work experience in managing and supporting variety of technology enabled products and services of the Fortune 500 Companies.  Specialised in IT Business Process Outsourcing.  In 2018 Valeriya  joined the Crypto industry and is currently contributing to startups and small teams with projects based on open source. In 2020 Valeriya started her webinar called Shoes in Bitcoin, which is focused on learning the technology.