Second consecutive positive day for Bitcoin and most of the cryptocurrency sector. More than 80% of the top 100 capitalized cryptocurrencies are in the green, a signal that is currently supporting the ongoing bounce and partially recovering the losses suffered earlier in the week, which saw the worst losses since the beginning of the year.

One of the best gains of the day was in Enjin Coin (ENJ), which climbed more than 30% and returned to close to the all-time highs recorded exactly a fortnight ago, on February 11th. This highlights the fact that gaming remains an attractive sector.

This is also confirmed by another token, Pteria (PTERIA), which has seen its value multiply 20 times over the past month.

Among the big players, Litecoin (LTC) was the best performer, rising 10%. Among the blue chips, Cardano (ADA) is also doing well, gaining 4% today. Both are close to the highs reached last week.

The market cap remains above $1.5 trillion with volumes down for the second day in a row. This is a signal to be followed carefully because it accompanies the rebound, highlighting a price recovery not supported by major purchases. 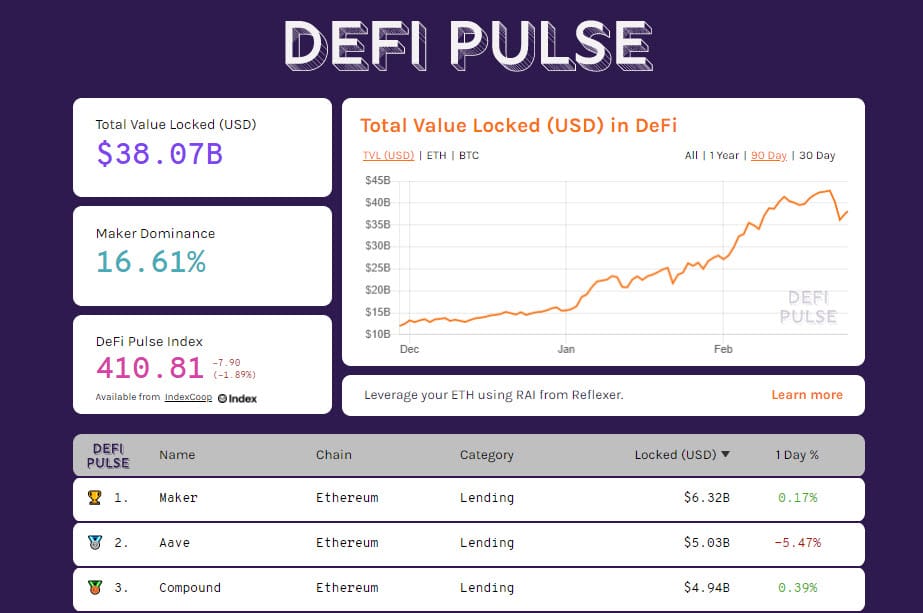 The total value locked in decentralized finance projects is back above $38 billion thanks also to the rise of Ethereum which continues to climb above 7.82 million ETH, the highest level in the last 4 months.

Bitcoin (BTC) on the upside

In the last few hours, Bitcoin prices have recovered the $52,000 mark, a move that at the moment still remains identified as a technical rebound. To understand whether the decline has come to an end we will have to wait for the next few days, or we are still within a medium-term bearish phase.

Only a recovery of $55,000 would start to provide bullish signals again.

The return of Ethereum’s prices above $1,650 brings it back to the top of the bullish dynamic trendline that was violated during Tuesday’s crash. At the moment it is a sign of short-term strength that will need to be confirmed in the coming days.

The short-term trend still remains within a bearish trend. To get more confirmation we will have to wait for the next few days or for the recovery of $1850. It is important for Ethereum not to break the support of $1,350.