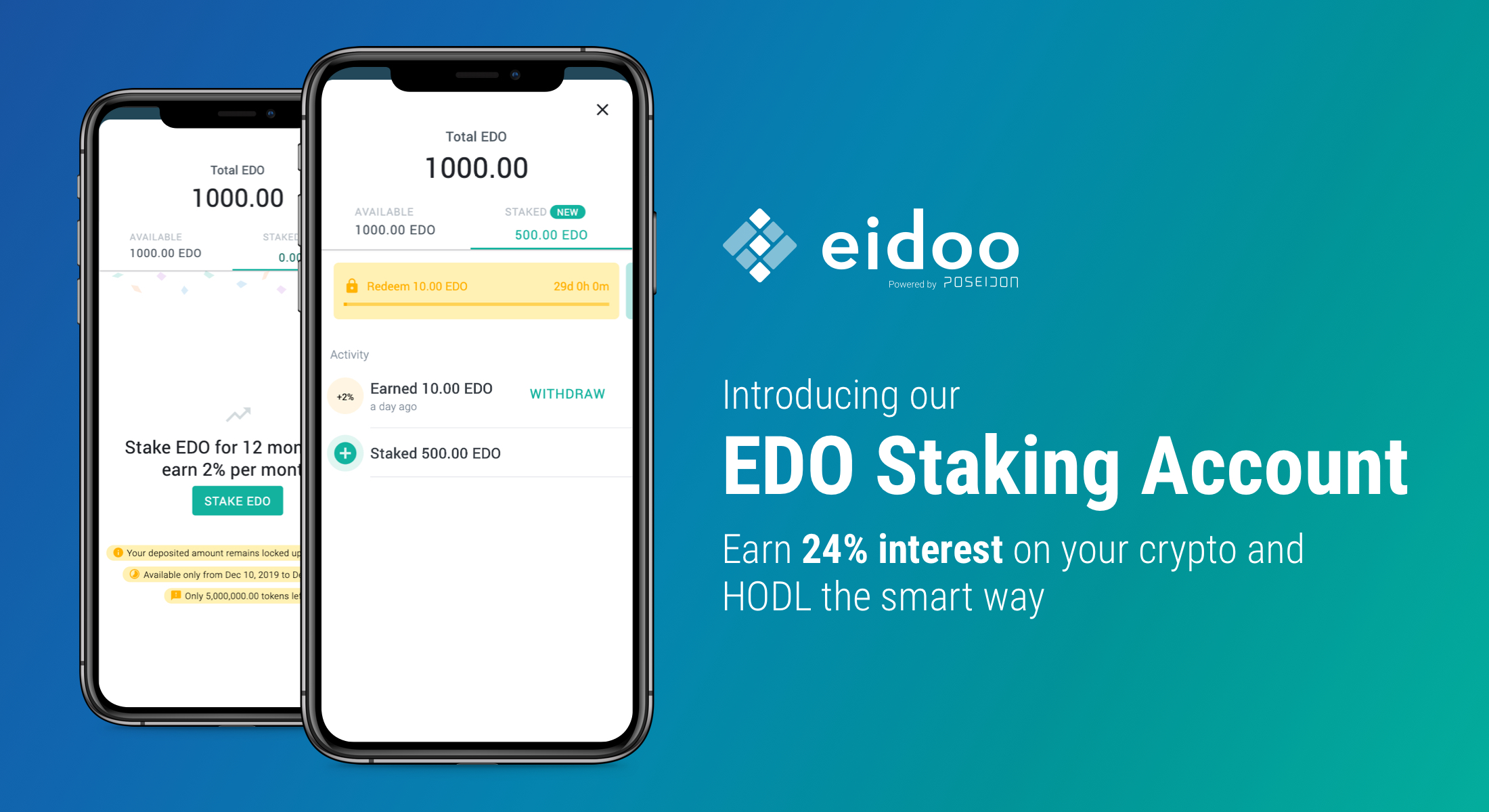 Introducing the EDO Staking Account: earn interest on your crypto

As we grow the Eidoo platform, we want to make sure our users have access to every product, tool and platform that joins the DeFi world.

But we also want to give back to our own Eidoo community, showing our appreciation for every EDO hodler while also adding one more tool to your DeFi toolkit.

That’s why we’re launching our Staking Accounts, allowing any of our users to earn 24% annually on their EDO holdings!

The opportunity to open an EDO Staking Account is available for the next two weeks, from today the 10th to 24th December.

Staking is an increasingly popular tool in the cryptocurrency space. It is similar to lending, where you loan assets to a liquidity pool. When others in the blockchain community borrow your loaned tokens, they pay interest, which you receive. You can lend for as little or long as you’d like – even as short as one block!

However, when it comes to staking, you can stake tokens without lending them (but you cannot lend without staking). In the case of Eidoo, users will stake their assets, locking them up for a period of time, but not contribute to a liquidity pool which others can borrow from (more on this later).

Staking is very useful for other use cases, such as staking some tokens when registering for an event to encourage you to show up. Some platforms also require you to stake tokens when you sign up, creating a token-based reputation system. This discourages people to create fake accounts or act badly within the network, as they have some money locked up in their registered ID. Think of free mail services – because it’s free, spammers can make many new accounts. If it was paid system, they would be less likely to create many fake accounts if they had to stake tokens each time.

This avenue of DeFi is evolving very quickly. When compared to traditional finance, earning interest with your crypto holdings is far cheaper and grants more autonomy. That’s because almost the entire process is automated, thanks to smart contracts. No intermediaries also means less margins cutting into your yield, as well as less time wasted and less hassle. In some cases, you can simply swap one token for another to start earning interest right away.

Your funds also remain secure, as they don’t pass through anyone else’s hands so are not at risk of theft or fraud.

What’s the deal with staking EDO? 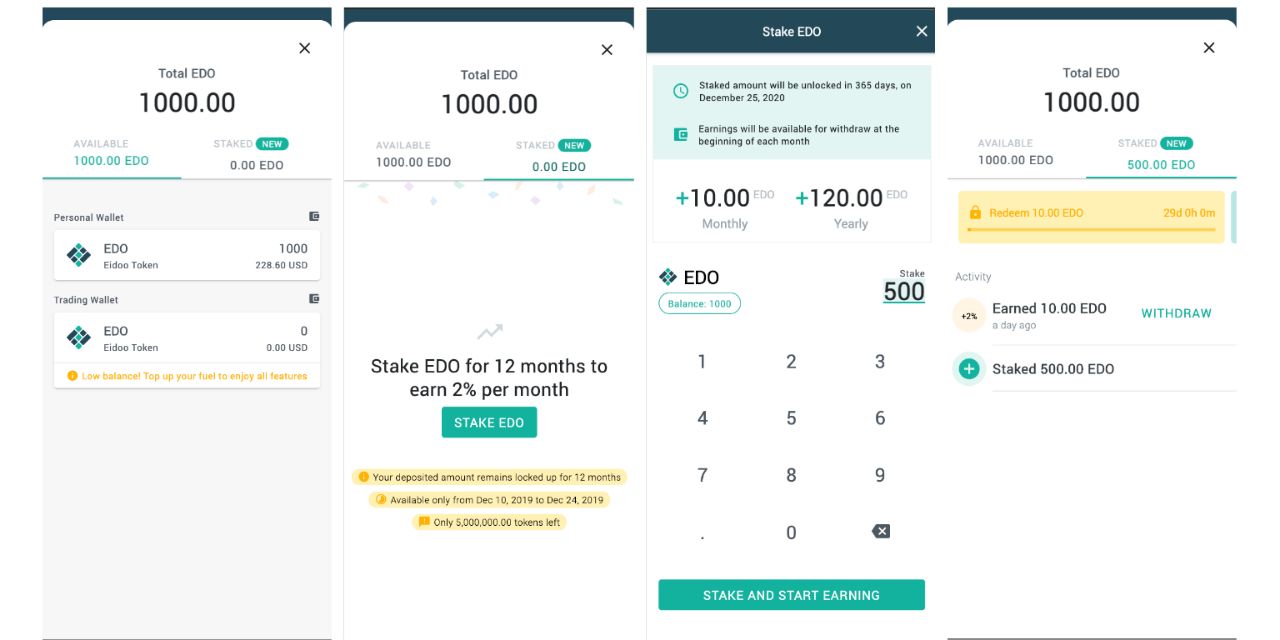 Our staking feature is a little different. It’s more of a long-game, similar to a high-interest savings or pension account.

Every Eidoo user can voluntarily lock up their $EDO (our native currency) for a full year and earn on average 2% interest every month. That’s 24% annually – the best interest rate industry-wide.

Once you’ve staked your EDO tokens, you’ll be able to withdraw your earned interest on the first of each month, however your originally deposited (staked) amount remains locked up for the full 12 months.

The opportunity to open an EDO Staking Account is only available from today, the 10th to 24th December. From the 25th December, interest will begin to accrue.

This staking opportunity will be capped at 5 million EDO tokens, so open an account today before we hit our limit!

Access this new staking feature via this magic link. 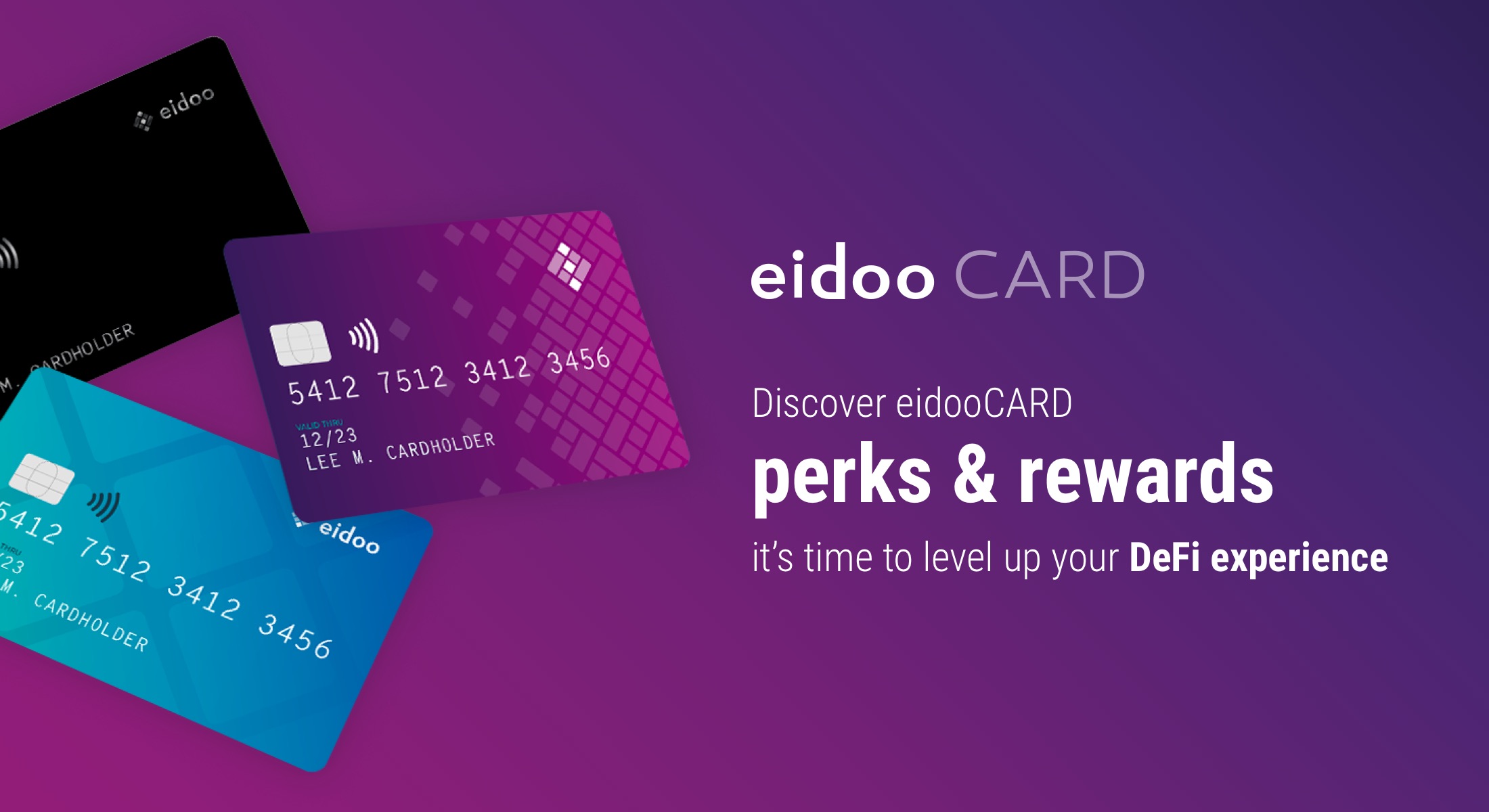 The Eidoo Card launched just weeks ago, yet over 1 million EDO has already been staked by crypto users claiming their cards. Now it’s time to level up your DeFi

END_OF_DOCUMENT_TOKEN_TO_BE_REPLACED 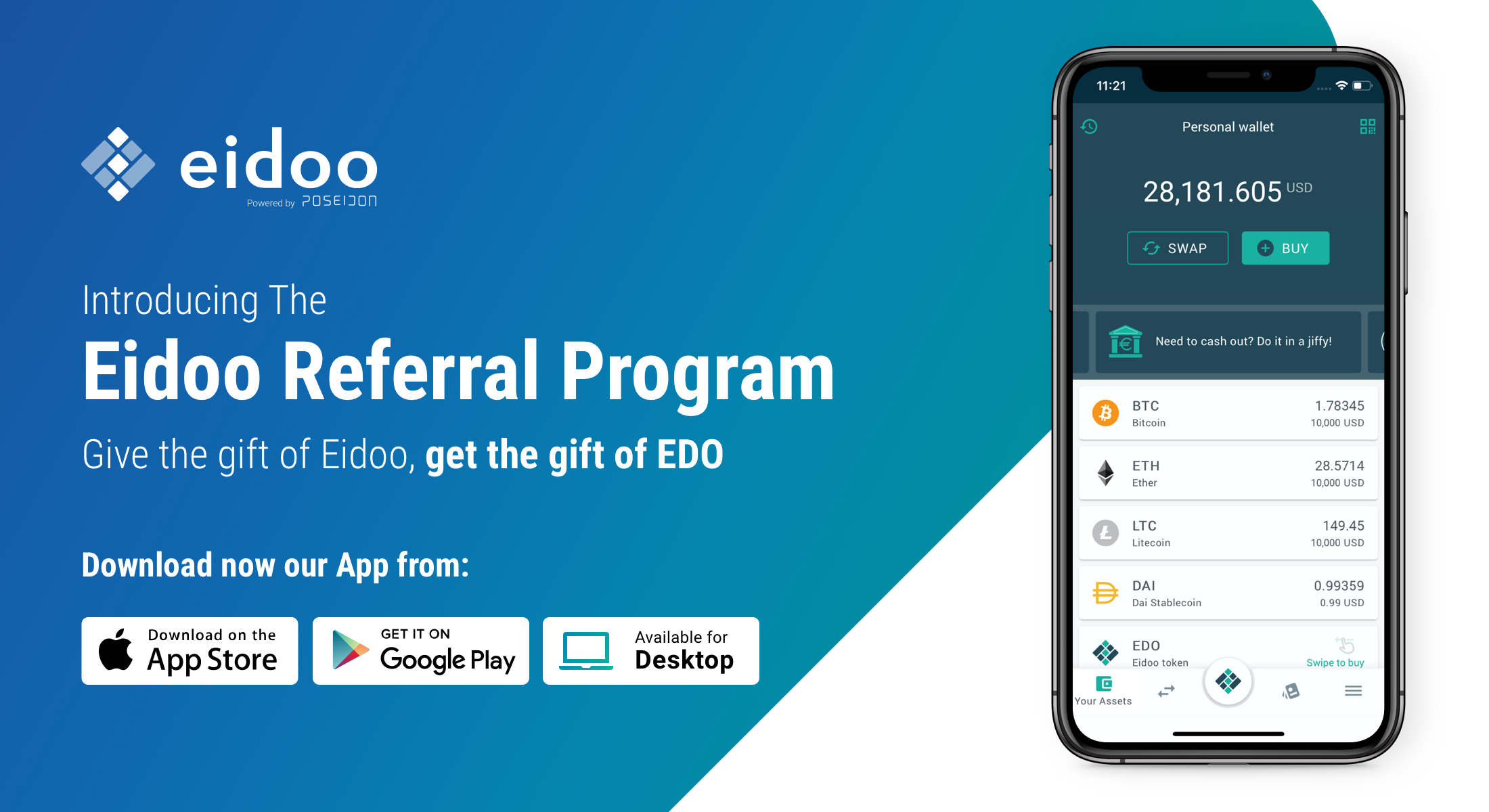 Introducing the Eidoo Referral Program; EDO for you, ETH for a friend!

Share the Eidoo app around and receive 5 Euros worth of EDO for every successful referral! Read on, and then refer on…   Over the past few years, Eidoo has

END_OF_DOCUMENT_TOKEN_TO_BE_REPLACED 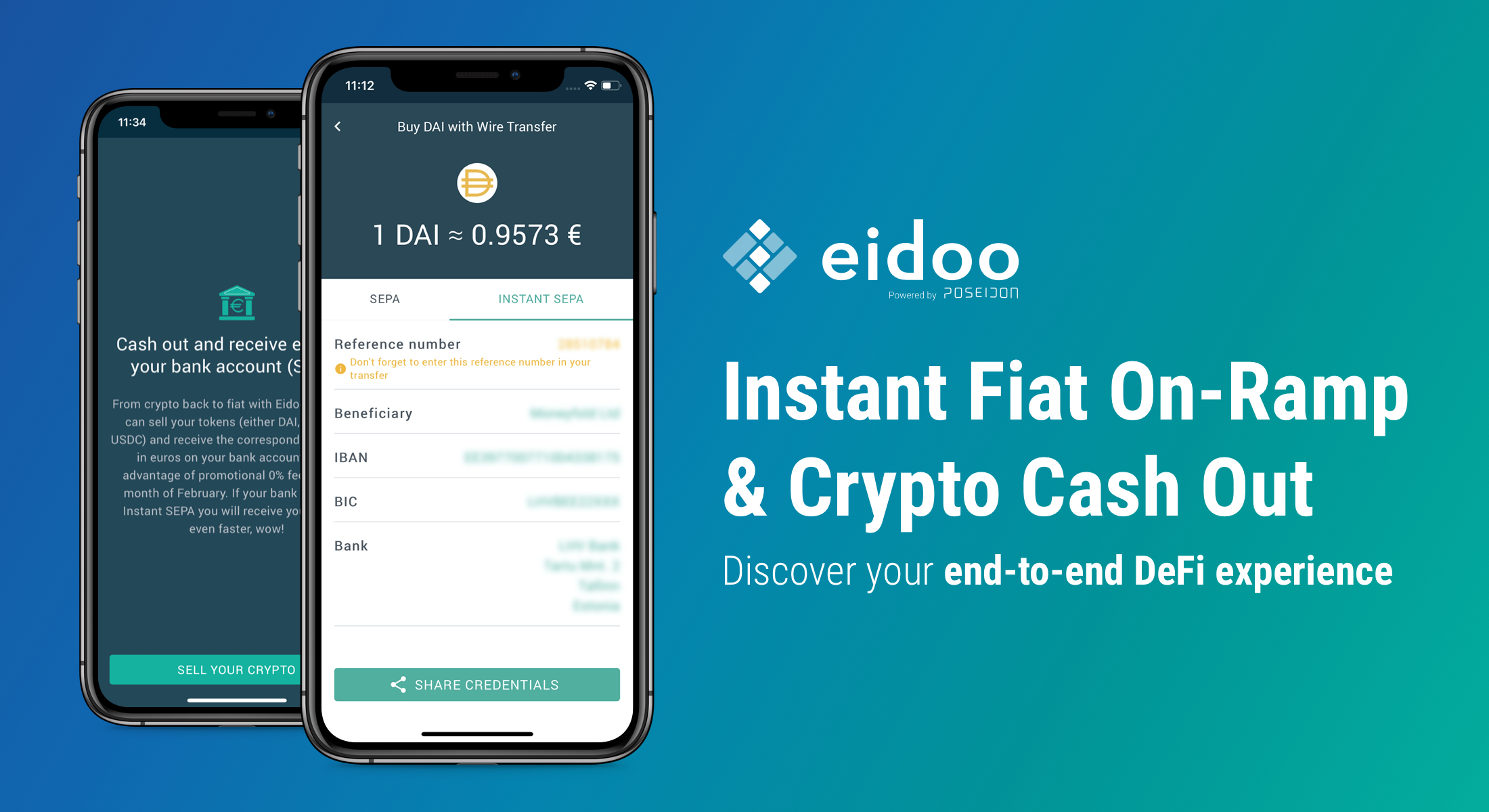 Three months ago, Eidoo was one of the first wallets to integrate an Instant SEPA on-ramp allowing European users to purchase digital assets within minutes. This new path from cash