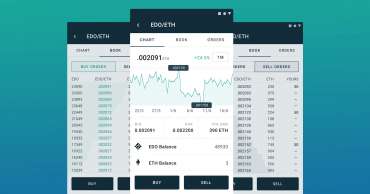 Welcome to the Eidoo Hybrid Exchange

One of the core features of Eidoo is its very own Decentralized Exchange, a long-awaited next generation exchange based on Ethereum, which enables users to trade securely while staying in total control of their funds.

Today we are really proud to announce the release of our first public version of it.

The next few paragraphs will explain how this first release works, what the unique technical features of the exchange are and what to expect from our future iterations.

We have asked our director Thomas Bertani, a long time blockchain expert, and Marco Polci, CTO of Eidoo, to describe in the rest of this article the disruptive elements that are powering the Eidoo Hybrid Exchange under the hood.

We call it “hybrid” because it uses the best features from the traditional highly-scalable centralized world and the new highly-transparent decentralized one! On the one hand, it enables to exchange ETH and ERC20 tokens via smart contracts, on the other it efficiently handles the order management and the order matching part. What this means in practice is that you will experience a sleek UX yet very secure and decentralized. Given its experimental nature we have decided to temporarily release it in a separate application – “Eidoo Preview” -, but you shouldn’t worry as it has been extensively tested for months and anybody can download the app for your mobile: iOS or Android or for desktop.

The Eidoo Hybrid Exchange is powered by a variety of smart contracts coded from scratch in order to give the strongest guarantees that Ethereum can give around the total control of the funds. Those smart contracts enable the trading of ETH and ERC20 tokens, which get exchanged via the so-called “atomic swaps”. These smart contracts enable some automated logic to be executed and they can pull/push funds from the “Trading wallet” according to the indications you have given as exchange orders. This is the reason why the traditional Eidoo wallet has now been renamed to “Personal wallet”, while the one dedicated to such interaction with the exchange is called “Trading wallet”. You can deposit and withdraw funds at any time from the Personal wallet to the Trading one.

Differently, than Etherdelta and Etherdelta-derived exchanges, which fall short of strong security guarantees for the users, the Eidoo Exchange gives new security guarantees, a faster experience and it improves the order-matching logic by delegating it to a verify efficient off-chain yet secure engine. Other exchanges such as IDEX keep the order matching off-chain as well, but being that part centralized and not auditable they can potentially operate it in a way which gives them unfair advantages (i.e. front running), hence nullifying most of the advantages that a decentralized exchange is meant to give in the first place.

Thanks to our collaboration with Oraclize, we are using the Oraclize “authenticity proofs” to show that the order matching is done in a fair and correct manner. This is not only superior to all the existing centralized exchanges, but also a novel application in the DEX ecosystem. We are really proud to be pushing forward the developments in this space with a long needed feature like this one.

For those of you who might be looking for more technical details, you can find here a technical document showcasing the internal workings of our “decentralized exchange 2.0”.

We are aware of the fact that the exchange UX is yet to be improved, but we have decided to release now the Preview version as the exchange itself is already capable of handling all the features we had described in our initial White Paper and, above all, to get some initial feedback on the work we have been doing for the past 10 months.

We are excited about the new features that we have invented as well as of the innovative underlying structure of the exchange and we hope that you will appreciate them as well; this is part of our effort to provide a simplified user experience to non-technical users, while not compromising the blockchain security model – this is key in order to provide a genuine blockchain experience to the average Joe.

During the coming months, we expect to release incremental improvements, first in the Preview app and later on on the main one, along with a set of tools that will make the integration with the exchange easier for professionals. Other trading pairs will be listed as well, however, initially we have decided to stick with ETH/EDO only.

The initial version of the Hybrid Exchange that we have just released while being fully functional, does not include yet a complete UI to monitor the orderbook and the charts – this means that you are free to place orders and trade but advanced users will find that the tools they are used to using are missing. An improved UX, including charts, full orderbooks and other useful information are coming soon as well, here is an anticipation of what you can expect next. It is a big step forward for us and we hope that it will excite you at least as much as it excites us – we expect to merge it into the main Eidoo application shortly, once the Eidoo Hybrid Exchange has been extensively tested on its Preview version. In the meantime, why don’t you download the “Eidoo Preview” app now and help us to test it? Any feedback is welcome and yours is the one that matters the most.