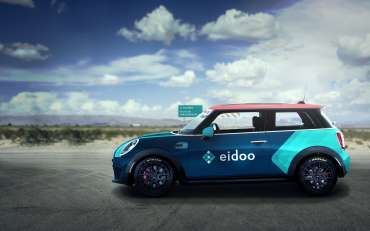 We are excited to announce that Eidoo is now one of the Official Sponsors of MINI Challenge 2019, a world-famous championship of MINI cars.

This epic event features 12 races on 6 different circuits in Italy, with the first race taking place on April 7th at the Autodromo Nazionale in Monza, Italy. Other dates are: May 19th in Misano, June 23rd in Imola, July 21st in Mugello, Vallelunga on September 15th and again Monza on October 20th.

Throughout the past years, Eidoo has had the opportunity to partner with some great companies and brands, and has also helped new startups in launching their projects. While we will continue to explore these opportunities in 2019, there are several reasons why we think it makes sense for Eidoo to sponsor the Mini Challenge 2019.

The car is a John Cooper Works Challenge Pro, fully-branded with the Eidoo logo and colours; it will be driven by the racer Federico Alberti.

This is a milestone for Eidoo and cryptocurrency in general as, to date, no other coin has sponsored a MINI Challenge event. With big companies and well-known institutions continuing to join the blockchain space, this is another proof that cryptocurrencies are moving towards the mainstream.

Mini Challenge events have millions of viewers worldwide, primarily in the US, Europe and Australia.

“MINI has a growing worldwide fan base that consists mainly of young people who usually are the same ones that are interested in new technologies such as the blockchain and cryptocurrencies”, explained Natale Ferrara, founder of Eidoo.

Having the Eidoo logo displayed on the car and on the MINI’s website, gives EDO more global awareness that can drive engagement among people who may have never heard of Eidoo or blockchain before.

#SpeedNeedsDirection as a blockchain movement

On this occasion we are launching the #SpeedNeedsDirection hashtag as a parallelism between the velocity of cars and blockchain transactions, highlighting also the correct direction that these technologies – but most of all the companies – have to follow to achieve significant results: without a direction speed is not only pointless but also dangerous.

So many words have been spoken in the industry on the fact that cryptocurrencies are not for criminals and that the technology is here to stay, but we all have to set the right example by using this technology responsibly. Furthermore, it is also in our interest to make this environment increasingly trustless and transparent and that is why Eidoo does not store any private keys nor track users with blockchain analysis tools.

Watch a preview of the MINI car sponsored by Eidoo here: