Amazon’s cryptocurrency could arrive before the end of 2018

For a long time there have been rumours about the release of a possible Amazon cryptocurrency, that is, an unidentified currency issued by the e-commerce giant, of which in reality nothing is known, let alone the release date. 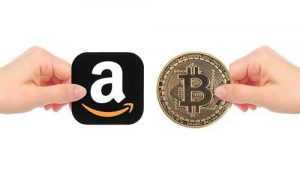 But some of these rumours, which can be traced back to Jeff Brown, have been reported also by other sources and even if they are to be considered only indiscretions without any evidence, the fact that they reappeared from different sources caused the topic to reemerge again.

It’s been years that an Amazon token has been hypothesized, but so far none of these hypotheses have ever been confirmed.

Jeff Brown is the editor of “Near Future Report“, an investor advisory service focused on short-term trends.

The official website reads that Brown is an investor with a 25-year career behind him and has worked on many of the most exciting technologies of the last 30 years.

The Near Future Report is released every month and in the August 2018 issue, this hypothesis was launched:

“Amazon is on the verge of releasing its own cryptocurrency.

This could happen tomorrow… It could happen next week… or it might not happen for a couple more months. But rest assured… Amazon Coin is coming out before the end of 2018“.

This indiscretion didn’t make much news at the time, also because the thing had already been hypothesized many times in the past even if it always turned out to be false.

In recent days however, it has also been reported by other sources: it is not known if they refer only to the indiscretion published by Brown in August, or if they have new information about it, but the end of the year is approaching and those who quote this indiscretion now do so with the risk of being unreliable.

The sources that have relaunched this rumour in recent days are not public unfortunately, they are other investment consulting services similar to Near Future Report, but specializing in cryptocurrencies.

We don’t know if they have any other relevant information or if they are simply reporting Brown’s August hypothesis, but what is certain is that they have relaunched this forecast with only one month to go, indicating a certain confidence on the release date of the hypothetical Amazon cryptocurrency.

This does not mean that the forecast should be considered reliable, but only that it increases the number of sources that expose themselves in relaunching it.

Previous article CryptoKaiju, new figurines on the Ethereum blockchain. Is it the next Cryptokitties?
Next article Insolar, the fourth generation blockchain platform

eToro adds Cosmos, The Graph, Curve and 1inch
Where can Bitcoin go: predictions of the big players

The latest news on Chainlink, Polkadot and Shiba Inu