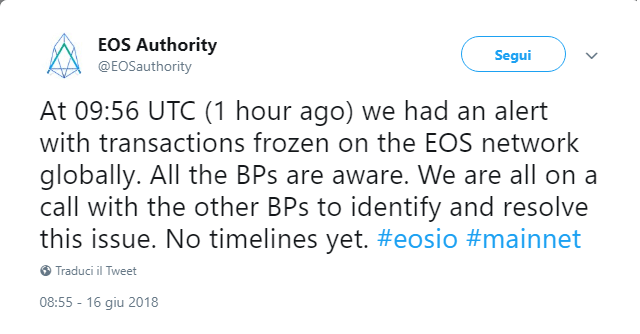 EOS ICON, both having issues and freezing transactions

It is rare that Eos Icon, two currencies with relevant capitalisations have the same problems on the same day.

EOS ICON, both having issues and freezing transactions: Leggi qui l’articolo in Italiano

Bugs are always around the corner and can block transactions of a cryptocurrency or, as happened in the case of the Parity Wallet, even freeze it.

Let’s start with EOS. As made known by the same authority manufacturer of the blocks a serious programming bug has blocked all transactions: 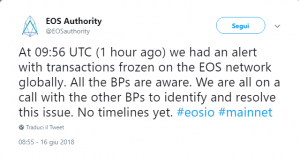 The problem was not easy to solve, as it was an inherent bug in the code related to the programming of deferred transactions.

After the finding out about the problem, the team must have worked feverishly because in 3 hours they released an update for the nodes: “Nodeos” 1.0.5. They announced that everything had returned to normal and that the first new block had been generated.

EOS has just launched its mainnet and it currently capitalizes at 9.5 billion dollars.

A similar problem occurred with ICON on the same day: the bug hit the smart contract which should ensure the possibility of withdrawing tokens from the wallets. This is the problem highlighted by the programmer:

The value “!=” should have been written as “!==”, because, in the first case, the meaning is not “equal”, but “different”, so it prevented the identification of the wallet from which to make the withdrawal.

A trivial mistake that led to the temporary interruption of the conversion of the ETH tokens in ICX and risked putting out of the game a token that capitalizes almost 800 million dollars.

Even here, the team started working immediately and, as explained in a press release, a temporary correction was put in place in a short time, although in the future a deeper update will be necessary.

Such a bug is very dangerous for ICON because this token wants to act as a bridge between different blockchains, and the impossibility of withdrawal blocked its main functionality.

The prices of both tokens were affected, but only temporarily.

Previous article Safer ICOs with Desico
Next article Xriba, bookkeeping on the blockchain