In Brazil, Pier platform is being developed for the exchange of information between the various financial market supervisors.

It already has a name: PIER, Information and facts Integration Platform for Brazilian Regulators.

It will be a blockchain-based tool to facilitate the exchange and integration of information between different financial regulators in the country.

In particular, it will be used by the Central Bank of Brazil (BCB) and other regulators of the Brazilian National Financial System (SFN), such as the Superintendence of Private Insurance (Susep), the Securities and Exchange Commission of Brazil (CVM) and the National Authority of Pension Funds (Previc).

In fact, to date, the exchange of information between these subjects is not yet automated, and only takes place through letters or emails.

The choice to rely on the blockchain was made because it provides a “horizontal network” of information sharing, without hierarchies.

The platform was developed by BCB’s IT department (the so-called Deinf) and will be operational at the end of 2018.

Aristides Cavalcante, deputy head of Deinf, said: “Traditional business models of information exchange between multiple entities require a central entity, which ends up exercising some degree of hierarchical superiority over the remaining ones, this does not necessarily reflect institutional reality. 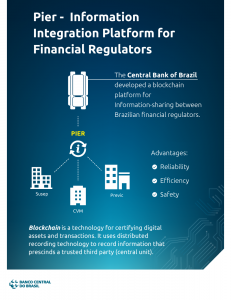 In addition, because the blockchain platform records every request for data using cryptographic signatures, it is possible to certify at any time the authorship and that no entity has tampered with the data, ensuring the authenticity of the information.”

Another advantage of the blockchain is that data cannot be deleted once recorded.

Cavalcante’s words make it clear that the Deinf has understood the real deep advantages that can be gained from using blockchain technology, and if the initiative is successful, it is conceivable that it can improve other similar projects.

The lack of hierarchical relations is fundamental for the institutions, in order to avoid putting at risk the institutional balance between them, often sanctioned by the Constitutions of the countries in which they operate.

Moreover, the guarantee of the formal correctness of the data, of its provenance and of its perfect preservation is another enormous advantage that public institutions can hardly do without.

Thanks to partial decentralization and the inviolability of blockchain, it cannot be excluded that more and more institutions will end up appreciating this new technology.