This is the objective of the PAI Project, the acronym of Personal Artificial Intelligence, which would like to give everyone a decentralized avatar on a blockchain able to replace them in everyday activities.

These avatars, called PAI project, will be able to replace us in various online activities, even on social media, to interact with doctors, or with a celebrity impersonated by a PAI that, equipped with artificial intelligence, will learn the way we relate to the web in order to take our place when necessary.

Imagine being able to be present online, responding to emails or talking to friends, and at the same time rest, take a walk, spend time with your family.

In this project, the blockchain is necessary to allow the worldwide presence of these avatars, without spatial limitations or linked to a single server.

This project is based on a new blockchain that can also integrate a data pointer and a torrent network so that in case of the app being deleted, all the data connected doesn’t disappear, and at the same time suitable to manage a flood of personal data efficiently.

The Oben company in Los Angeles manages the development of the artificial intelligence. 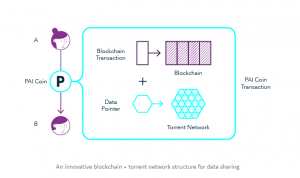 A truly futuristic project, already in progress: the mainnet was launched on July 2 and is able to manage the first wallet, Pai Up, but also the first experimental avatar application, Payio, while on July 14 the first upgrade regarding the introduction of the Memory Pool, or Mempool, was launched, which handles transactions before they are recorded on the blockchain, making it faster to manage.

These innovations in rapid succession have done well, from the point of view of the market, with a good result in price and transaction volumes that exceeded 100 million in 24 hours (Coinmarketcap data):

This coin is traded mainly on Huobi, where it carries out more than 80% of its trades.