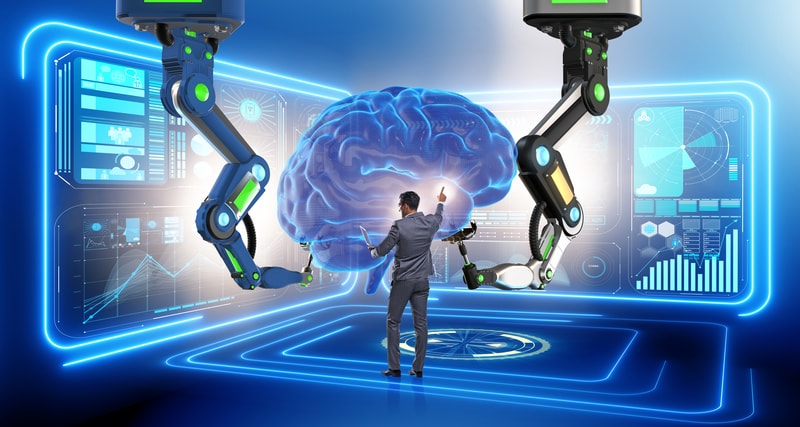 Robots, computing power, hedge funds and smart contracts. Here are 4 projects that merge AI blockchain technology, to do things that until yesterday were unthinkable

AI, the so-called Artificial Intelligence, is the ability with which computers learn to understand and analyze the world around us, a bit like human beings do.

From a technical point of view, AI has nothing to do with blockchain, but both are technologies with enormous potential, which are developing and spreading.

Which ongoing projects are trying to take advantage of the possible synergies between the two technologies? Below are some significant projects

SingularityNET started with a famous ICO that raised 36 million dollars in just 60 seconds. Moreover, founder Ben Goertzel is a well-established name in the field of AI, being a scientist at the head of Aidyia Holdings and Hanson Robotics.

Hanson Robotics himself is involved in the creation of the robot Sophia, famous for being the first robot in the world to obtain a citizenship.

With SingularityNET, Goertzel wants to create a blockchain focused on artificial intelligence to empower Sophia’s brain. In particular, thanks to this project, everyone will be able to contribute to improve the brains of robots like Sophia.

A video was also published in which Goertzel and Sophia explain the project.

The aim is to create a decentralised AI market in which companies and individuals will be able to buy and sell AI data and algorithms on a large scale.

Thanks to blockchain technology, the market will be decentralized and will allow even the smallest companies to participate. In addition, a system of evaluation of participants will be integrated so that their qualities are made public.

The second project is linked to the first. A short time ago, in fact, a partnership was signed.

This is DeepBrain Chain (DBC), whose ICO was one of the first to be launched on the NEO platform.

DBC wants to be a computing platform to create Artificial Intelligence algorithms.

The objective is to reduce the cost of calculations by 70% since they are one of the main access barriers of this sector.

Blockchain was chosen as the technology to create a decentralized neural network. In addition, the DBC network nodes provide computing power and in return are rewarded with DBC tokens.

A third project worth mentioning is Numerai, a hedge fund based on blockchain and managed with Artificial Intelligence. In fact, many hedge funds are already managed with AI, but this is the only one that also uses blockchain technology.

Thanks to the Numerai blockchain, scientists from all over the world can send forecasts based on automatic learning models to improve the artificial intelligence that manages this alternative fund.

To promote the processing and sharing of forecasts by Numerai, a weekly competition is organised, managed through Numeraire tokens (NMR). When a model is approved, the author, usually a scientist, receives a quantity of NMR tokens in proportion to the accuracy of the model.

The fourth project is Matrix.

The first thing to say is that it has nothing to do with the famous film. It is an open source blockchain platform that will support smart contracts and automatic learning services.

The platform infrastructure was designed and built using AI techniques.

Artificial intelligence will be used to improve the platform itself through self-optimization of its blockchain networks.

The goal is to revolutionize the user experience during the execution of smart contracts by making the process simpler, faster, safer and more flexible.

To date, this process is still complex and complicated, as well as requiring a certain amount of “human intelligence” to be elaborated.

Artificial Intelligence could help in cases where those who create or manage smart contracts do not know enough to handle the inevitable complexity.

Matrix makes it possible to obtain smart contracts in natural language, which means that anyone can create them simply by writing them in English, Spanish, Chinese, etc..

The ambition is to make it possible for everyone to create smart contracts so that they can be used potentially for anything.

The implementation of the process in Chinese is already operational.

Petro (PRT): the renaissance of Venezuela’s digital currency
Bitcoin Secret: a new scam has surfaced on the web

AC Milan issues its own fan token with Socios