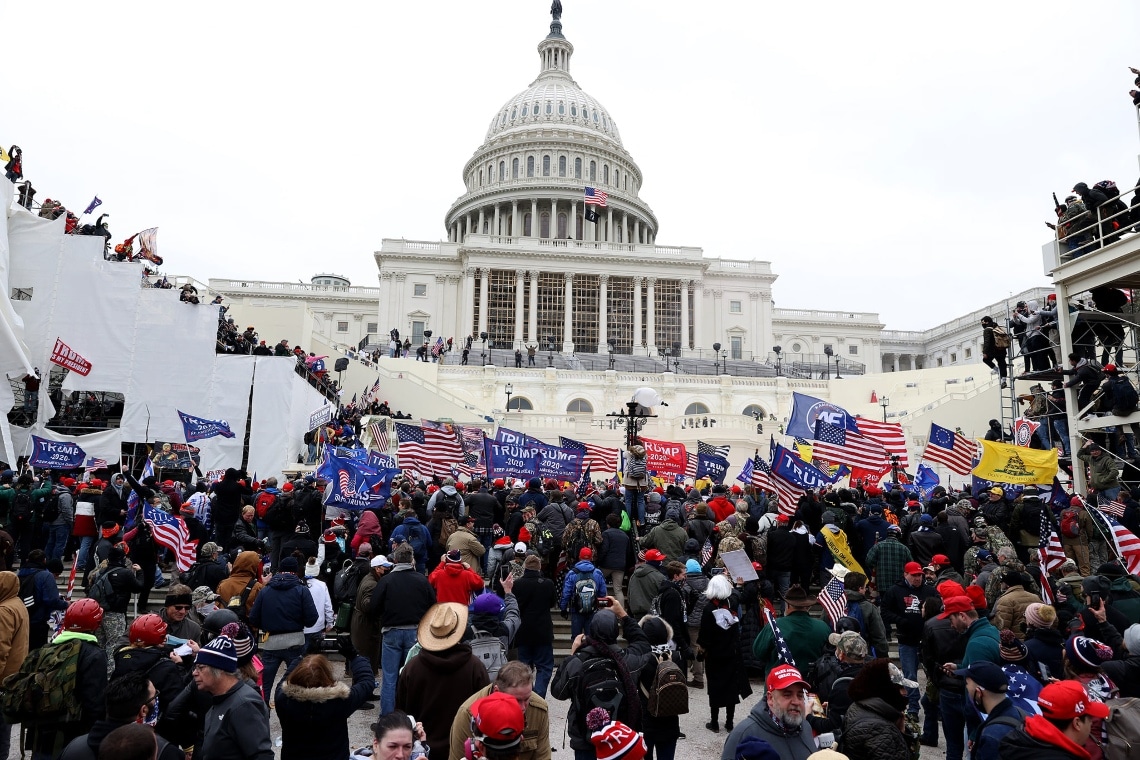 Trump and the storming of Capitol Hill: “We risk a civil war”

The images of Donald Trump’s supporters who yesterday stormed Capitol Hill in Washington, to contest Joe Biden’s victory in the US elections have shocked the world.

What was supposed to be a simple protest demonstration has turned into the darkest day in the recent political history of the United States. The Tycoon’s supporters climbed over the security barriers (fragile, to be honest) that separated them from the Capitol, where members of Congress were ratifying Joe Biden’s victory in the US elections. The scenes of devastation, of unrealistic revolutionaries sitting on the benches of Congress and on Nancy Pelosi’s desk, have gone around the world.

As did the armed personnel clearing the seat of US democracy around the world. While all this was going on, Donald Trump kept talking about election fraud and a stolen victory, while asking his supporters to “go home, peacefully.”

A chaos that could cost him removal by Constitution, two weeks before the transfer of power with Joe Biden, officially set for January 20th.

All this could not fail to trigger the reaction of the cryptocurrency world that yesterday watched in astonishment at what was happening on Capitol Hill.

Brock Pierce, crypto pioneer, with a past in development in EOS and Tether, who was running for US president independently, hoped that Joe Biden could restore peace.

2/2 it is imperative to honor systems in place, respect life, property and the transition of power. We are hopeful for a successful President-Elect Biden and a reunified nation built on peace.

Let’s keep the United States of America the greatest nation in the world.

“Throughout history, the United States has always stood in unity in times of strife. Despite color, creed, gender, or political party, we are the tangible example of democracy.

My heart is saddened by what has erupted at the Nation’s Capital today. I want to note, it is imperative to honor systems in place, respect life, property and the transition of power. We are hopeful for a successful President-Elect Biden and a reunified nation built on peace.

Let’s keep the United States of America the greatest nation in the world”.

Charles Hoskinson on Trump and the storming of Capitol Hill

Harsh, very harsh indeed, words from Charles Hoskinson, CEO of IOHK, which is behind the development of Cardano’s blockchain.

“We no longer have legitimacy in our institutions and this is a direct consequence of many decades of delegitimization, a divided and divisive media, and people no longer being able to understand and listen to each other. These flames were fanned by a totalitarian demagogue who, once he lost an election, instead of choosing to accept that result, even if he had grievances with the process, instead of using his incredible mandate, his charisma, his cult of personality and enormous resources, into something productive, perhaps a constitutional convention, perhaps ballot reform, perhaps massive election reform, he chose instead to try to drive this nation to the bring of a civil war”.

No more flattering is the assessment of the president-elect:

“The incoming president has no mandate. Joe Biden is a president in name only. Half of this country does not believe in him, respect him or feel that he is capable of leading us in any capacity, and he must understand that. As he takes the oath of office this month, if he chooses to invest what little power he has, procedurally and constitutionally, and to inflict it upon this nation his brand of opinionism that comes from his party, it will only further drive the divisions between the American people, to the extent where I believe that within my lifetime we will experience a civil war”.

And I used to call South Africa's Parliament a shit show…

At the end of its most difficult day, the US Congress has declared Joe Biden president. The transfer of power is set, as per tradition, for January 20th. It will be two very long weeks in which Donald Trump risks being dismissed by recourse to the 25th Amendment and the transition entrusted to his deputy Mike Pence.

With an America in shock, it will be up to Pence first and then Biden to restore calm in a nation that has never been so torn.

Previous article Coinbase: the exchange is down again
Next article International Crypto Business Association; the guide for eliminating the grey zone of crypto space