Bitcoin at $50,000, predictions and celebrations

Bitcoin has returned to the $50,000 mark amid general enthusiasm and more or less optimistic predictions for its future.

On Twitter, Bitcoin fans, wearing the now-famous laser eyes, are already celebrating the return to $50,000.

Among them, of course, is Tyler Winklevoss:

I've been waiting for this moment all my life…https://t.co/eIVoYNczYI

The reasons for the rise

Dragging up Bitcoin’s rise are a couple of factors, starting with the upcoming introduction of BTC tips on Twitter. This could lead to an increase in Bitcoin adoption, thanks to the massive spread of Jack Dorsey’s social network.

But in general, the market is in the green, driven by the excellent performance of Ethereum.

It is also worth adding that the community’s anticipation of 7 September is growing. This is the date marked on the calendar that will herald the debut of bitcoin as legal tender in El Salvador.

It will be a crucial test to prove the coexistence of bitcoin and the dollar (which is the current official currency in El Salvador), but also to see how the population will react to the introduction and spread of BTC. For Bitcoin to penetrate the inhabitants of the Central American country, as many as 200 Bitcoin ATMs are already in place.

Returning to Bitcoin’s price predictions, according to Milano Finanza‘s analysts, if BTC surpasses $50,500, it could trigger a new bull run capable of pushing the price above $51,300, up to $51,800.

Conversely, if this does not happen, it is widely believed that Bitcoin is likely to struggle again in the $46-48,000 range, where it has been trapped for a long time.

Some chart analyses, such as Glassnode’s analysis of Coinbase’s BTC reserves, suggest that Bitcoin’s price is poised for a bull run.

According to another analyst, however, there is little to be cheerful about. The MACD indicator is close to the sell signal, even the RSI indicator is already in the overbought zone.

This forecast suggests that Bitcoin will fail to break through the $50,500 mark today, which will lead to it having to consolidate in the $46,000-50,000 area. Otherwise, in case of a breakdown, it would open the race towards $55,000. These are the levels bitcoin hasn’t seen since May 2021, when the downturn caused by China’s restrictive policies was triggered.

The #bitcoin price reached $50k. Not so confident this time. MACD is close to a sell signal, and the RSI is already overbought. The $50,5k will probably not be passed today and consolidation in the 50-46k area will continue.
In case of a breakdown #BTC can reach the level of $55k pic.twitter.com/GsnPgO8Gi0

Meanwhile, the fear and greed index continues to project enthusiasm. 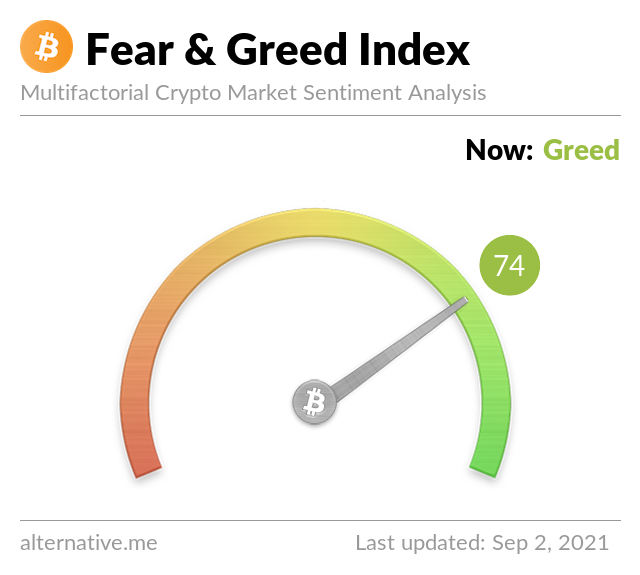 All that remains is to wait for the close of the day to draw conclusions and understand if the level of 50,000 dollars, more psychological than technical, can be said to have been definitively broken to the upside, or if there is still time to wait, experiencing a new phase of consolidation.