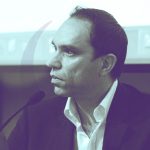 Why is the crypto market down today? An analysis

The price of Bitcoin and Ethereum today

2023 starts upward, the first week of the new year is green

Analysis of the value of Bitcoin (BTC)