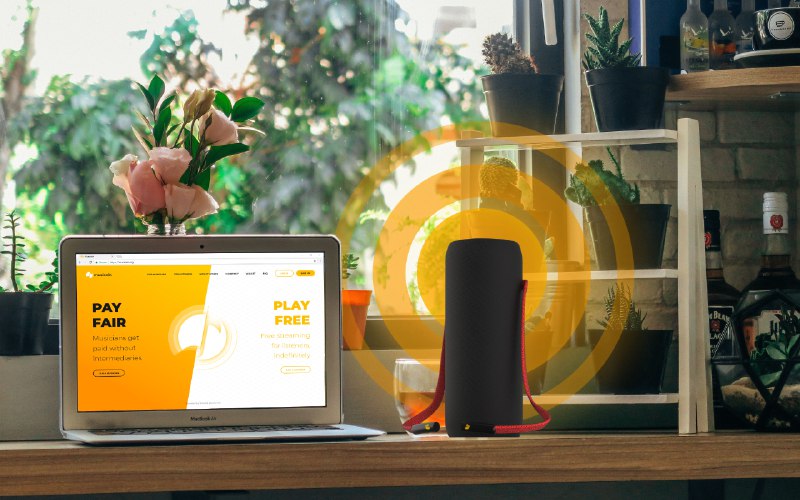 Music takes off with Volareo

Volareo is the name of the project of a new generation of smart speakers born thanks to the collaboration between Musicoin Project and ROCKI.

It promises a fairer remuneration for artists, free music for listeners and maximum levels of data security, all thanks to blockchain technology.

The smart speaker works by voice command and is now available in four languages: English, Dutch, Spanish and French (more languages are expected to be added soon) and is preloaded with 500 Musicoins – the equivalent of $10 – which allows paying the artists you choose to listen to using Volareo.

If you love a song and want to give a reward to the artist who made it, all you have to do is use the Volareo mobile app to donate a specific amount of Musicoin.

The project is also collaborating with platforms related to innovation in the world of music such as Emanate, LyricsFind, Choon, Soundeon and Jazz de Ville, to name but a few, in order to create an increasingly broad and better-working ecosystem.

Blockchain can help artists to receive the compensation they deserve and engage fans on a new level“.

“We’ve brought together the best experts in every field to create a smart, decentralized and direct speaker that is also part of an open platform for those who are active in the crypto and blockchain industries, as well as for creatives and developers,” Nick Yap concluded.

Volareo is therefore a real outsider in the world of Voice Commerce, a sector in great turmoil that, according to some estimates, will reach a turnover of 45 billion dollars in 2020, an increasingly important branch of e-commerce that is currently dominated by only a handful of companies, including the network’s big names such as Google and Amazon.

The first orders for the smart speaker Volareo can be made through the dedicated page on Indiegogo at the price of 9 dollars for Early Bird users until September 15 while the device itself will be delivered in the first quarter of 2019.

Previous article Bitcoin bail, a trial case in San Francisco
Next article Ten blockchain videos not to be missed