ICO 2018, September is the month of recovery

As every week, the consulting and rating company ICObench has published a report covering all the ICOs of the period from 23rd to 30th September.

The first results are quite positive because they exceeded the 150 million collected, 181 million dollars to be precise.

We have therefore returned to a level not seen since the last week of August. This demonstrates a certain collecting period, which tends to be higher at the end of the month.

If we extend the scope to the last two weeks, we can also analyze the projects that have managed to collect more results. At the top, we find DatEat, an ICO for the creation of a dating service between singles, which has collected 18 million. In the list, we also find Aenco, a project for the conjunction of finance and health on the blockchain.

The third position is occupied by the 16 million raised by Bitnautic, a blockchain solution for the management of ship logistics.

Still remaining in the 15 days range, ICObench evaluates both the countries that have been most active for ICOs and the types of industries: 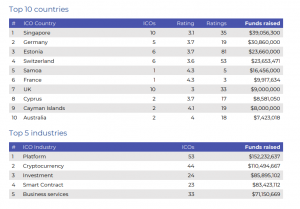 The most active nation is Singapore, which we know is also the legal seat of many initiatives with reference to the Korean, Chinese, and Indonesian markets, where the token sales are either illegal or do not enjoy legal clarity.

Next comes Germany, which enjoys the fact that it is the European financial heart. Estonia and Switzerland are in a good position too.

If we look at the industrial sectors and see them from an annual perspective, the platforms overtake the pure cryptocurrencies, while investments overtake the business services. The tokens are therefore becoming services, both industrial and financial, and lose the role of pure payment systems, moving towards a progressive greater complexity. This is the sector figure on an annual basis. 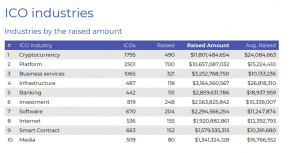 September had a very low collection period also due to the fact that it was the first month after the summer and that the results of the first three weeks were really disappointing. At the same time there is a downward trend in ICOs and to see the latest result above one billion we have to go back to June.  We have to wait months of a normal collection like October before we can conclude if this system of financial collection is in a crisis or not.