Can the economy be linked to art, beyond the value of artworks?

The answer is yes. 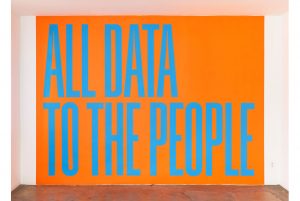 At the Von Bartha gallery, an exhibition will show the effects of cryptocurrencies on the global economy through art.

The works are by the Danish collective Superflex founded in 1993 by Jakob Fenger, Rasmus Nielsen and Bjørnstjerne Christiansen, and active for a long time in Denmark.

The collective will exhibit for the third time in Switzerland, at the Von Bartha gallery and will propose artworks showing the influence of blockchain, Bitcoin and Data Management on the economy and the world.

The title of the exhibition is named after Falcon Bank, the first bank in the world to accept cryptocurrency transactions.

The artwork that stands out is “Connect with me”, a piece composed of 5 sculptures that aim to show the evolution of the price of bitcoin over the last 18 months, highlighting the upward and downward trend and the fluctuations, within a specific exhibition area.

Superflex tries to translate something intangible, such as bitcoin and its value, into an artistic product created specifically for the event at Von Bartha.

The exhibition will also include the mural “All Data To the People”, which seeks to show the distribution of power in today’s world through the expression of the potential of data processing, and how its widespread distribution is an element of democracy.

The exhibition at the Von Bartha Gallery in Basel will open to the public in January 2019.