The first stablecoins, including Tether USDT, were born in 2014. According to the report of Blockchain.com, to date, there are a total of 57 stablecoin projects, recording a considerable increase especially in the last 12-18 months with many new upcoming projects.

However, of these 57 stablecoins, only 23 are now operational while the remaining 34 are still in their pre-launch phase. 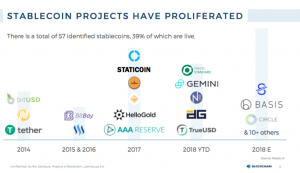 A necessary distinction to be made on stablecoins is the format on which they are based:

At the moment, it is not possible to define the best stablecoin project becasue there are several factors to consider that sometimes collide with each other, like the intended use, the degree of decentralisation and minimisation, compliance with regulations and, as for each crypto, the level of scalability.

In the general context, it is interesting to note the data offered on the global geographical distribution of teams dedicated to stablecoins that sees states such as the US, Britain and Switzerland in clear predominance.

It is no coincidence that the US and Switzerland are also the main jurisdictions.

With regard to financing, it is possible to define a ranking of the investors’ interest towards projects based on the funds raised for development that sees the stablecoin Basis with 133 million dollars raised at the top, followed by Terra and Jibra with 32 million dollars respectively. 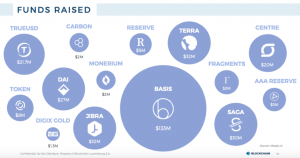 The ranking changes totally if we consider the market capitalisation of these stablecoins.

In this case, Basis disappears to make room for Tether, followed by TrueUSD, Bridgecoin and DAI. 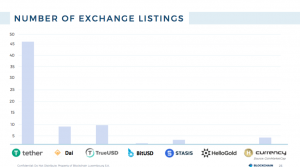 A turnover that is partly achieved by collaborations with trading platforms and exchanges, and partly by the real use cases and real projects offered by stablecoins.

Compared to cryptocurrencies like bitcoin, stablecoins, due to the reduced price volatility, have a potential for use of one trillion dollars.

Here are the use cases for stablecoins:

– means of exchange: an anchored price brings less risk for use by companies, traders and retailers.

– unit of account: compared to the free and volatile crypto market, with stablecoins as a unit of account, an existing measure would be made digital without disrupting the system.

– dApps: In Web 3.0 using stablecoins for decentralised applications would reduce the speculation that exists on tokens, especially for the ERC20 stablecoins.

–  store of value: to escape the bearish markets in the crypto world, using stablecoins could lighten the burden of losses, one example is after a project’s ICO phase in order to safeguard funds.

– performance evaluation: in the long term, taking a cryptocurrency as a reference point may not provide an objective overview for an evaluation of a project’s performance. Keeping the unit of measurement stable, or even anchored to the actions, would allow for better evaluation.

– derivatives, loans and remittances of payments

The future of stablecoins

Stablecoins are already one step ahead in the crypto system but there are some uncertainties about their futures, although they do not seem to be so discouraging.

The technology of the entire crypto ecosystem, even if under development, remains at low levels compared to the potential they can offer.

In the case of the future of stablecoins there are some points to consider that Blockchain.com lists in the report: