Crypto hackers back in action: the Cryptopia exchange has been hacked

Hackers have struck again: this time it is the crypto exchange Cryptopia that has been hacked. At 9:00 CET this morning this tweet was published on the official Twitter profile of the Cryptopia exchange in which the company based in New Zealand admits to have been a victim of a hacker attack: 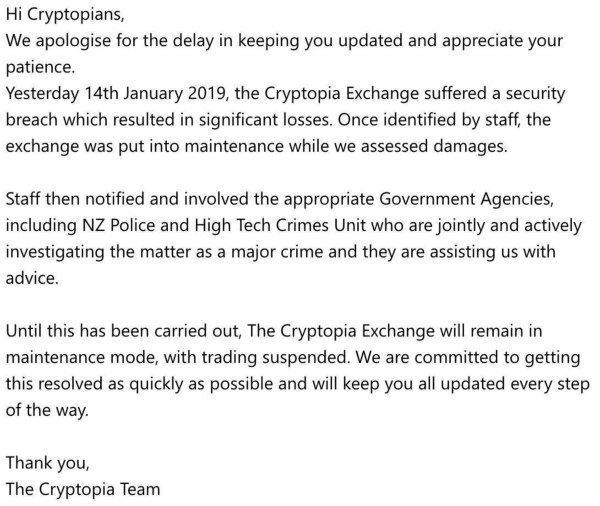 Cryptopia has stated that the hacker attack has produced significant losses. According to sources, namely Bigbit, they would amount to $2.5 million eth and $460k cnnz at the current price.

So far, the exact specifications of this attack have not been disclosed, so the extent of the losses is not known yet. Meanwhile, the website has been taken offline.

The Cryptopia exchange will remain under maintenance until the investigation is completed. The company has stated that it is committed to resolving the problem as quickly as possible and will keep users up to date at every stage of the process.

Cryptopia, based in New Zealand, is a smaller exchange, not even among the top 100 per volume on CoinMarketCap, but it is used in particular to exchange some cryptocurrencies or some tokens not available on other major exchanges.

The Cryptopia team has already contacted the relevant law enforcement agencies, including the local police and the technology crime unit, which are currently working with the exchange to find out who was guilty of the hacker attack and try to recover the stolen funds.

Given the small size of the exchange, for the moment it does not seem that this news has had any impact on the price of bitcoin or other major cryptocurrencies.