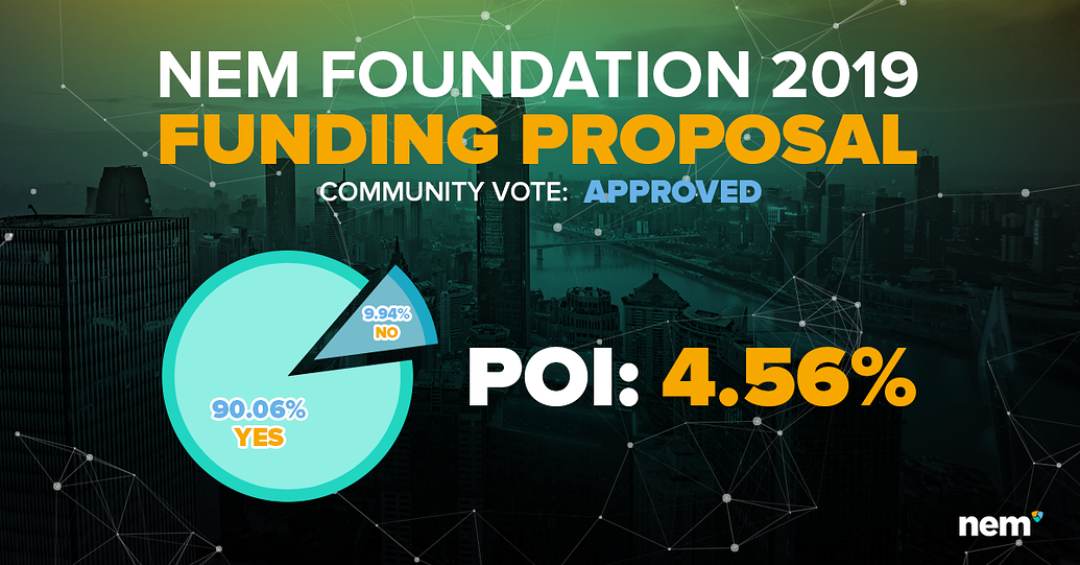 By a large margin, the 3% POI and the 65% quorum in favour of the proposal were exceeded, which were necessary for the XEM 210 million (approximately USD 8 million) funding plan to pass.

The news was reported by the NEM Foundation in the official forum a few hours ago. The Executive Committee and Board members expressed their gratitude to the NEM community for supporting the funding proposal, and also thanked the NEM Labs team for their success.

Community members voted through the Proof of Importance (POI) voting system to approve the following points of the NEM Foundation’s restructuring plan:

A new structure for NEM

As you know, the first obstacle encountered by the new Board of Directors of the Foundation was the negative budget. Following the sharp depreciation of cryptocurrency in the markets, the new board decided to restructure the organisational structure starting from the elimination of regional teams, replacing them with new teams focused on the products created.

The organisational structure will be agile, and new staff will be hired only if strictly necessary: “We will be prudent and careful in our expenses,” they say in the statement.

Funds will be managed by a team of professionals

Cillia Lim is the new director of NEM’s financial department, and will be surrounded by other financial professionals to manage community approved funds better.

Cillia, according to the press release, has 20 years of experience in the financial sector and will work closely with the Executive Committee and board to guide NEM’s financial transition.

The first step is to support Catapult

Once the NEM funding proposal is approved, the first objective is to direct funds to sustain the launch of Catapult.

The Foundation’s board of directors will work closely with Core Dev, the Project Management Committee (PMC) and all independent developers of the NEM community.

NEM co-founder Jeff McDonald has been selected as the interim CTO to achieve this goal.

According to Jason Lee, secretary of the NEM Foundation, a “clear” answer will arrive by March 31, 2019.

Two monthly updates from the Board

Having received the approval for the Funding proposal, the new Board promises two updates per month to inform about

Previous article Traceability of diamonds will pass through the blockchain to avoid scams
Next article The latest news from the crypto market: this is one of the best weeks of 2019