Which will be the capital city of blockchain technology?

Not Silicon Valley this time

Silicon Valley has long been the most important hub for many successful start-ups, capable of growing their roots into multi-million-dollar companies. However, it will not be on the podium as far as the adoption of blockchain technology is concerned.

As of July 2017, 62 of the 105 US companies valued at over $1 billion are located in California. However, by harnessing the power of decentralisation, blockchain startups are proving to be successful beyond Silicon Valley.

Cities around the world, whether it’s regulations, strong financial connections or other factors, have started to compete over the title of blockchain capital and are emerging as key pillars for the future of this technology. Although one forerunner has not yet emerged, there are some regions that are beginning to distinguish themselves from others in terms of the quantity and quality of companies involved in this sector.

Chicago is growing rapidly and is about to become a world leader in the cryptocurrency industry. The Chicago Mercantile Exchange (CME) and the Chicago Board Options Exchange (CBOE) were two of the first US financial exchanges to support bitcoin futures trading.

Less known, but equally important, is the government of Illinois, which is among the first to embrace blockchain technology and form the Illinois Blockchain Initiative (IBI). This is the approach taken by the IBI:

The Chicago Blockchain Center (CBC) is mainly focused on the last element. It hosts workshops for developers and organises meetings supporting local startups through incubation. This has led to the growth of a large blockchain community within the city.

Nowadays it is the leader in blockchain startups. Chicago companies have raised several million dollars to date, more than three times as much as Austin, Denver and Seattle combined.

Austin is also working hard in this industry. With no income tax and a liberal attitude, the state capital of Texas is ready for crypto entrepreneurs. The city has hosted the Texas Bitcoin Conference since 2014, a major conference that brings hundreds of thousands of participants to the Southwest every spring.

Although it is not focused on cryptocurrencies, last year they included several speakers from the blockchain field.

As one of the fastest growing cities in the United States, it would not be surprising to see Austin consolidate as a new headquarters.

Although many companies have left because of the implementation of the famous “BitLicense”, New York is still an active hub for innovation. With deep roots in the financial markets, it is natural that this city is home to some of the most famous companies related to cryptography. Beyond the vastness of the dominant population of New York, compared to other cities, there is also one of the largest blockchain conferences in the world: Consensus, which aims to make NYC the world blockchain capital.

Thanks to huge investment capitals, New York City could easily stand out among other cities in this race against time.

A country rather than a city, Singapore is a strong magnet for companies looking at ICOs (Initial Coin Offerings). The Singapore Monetary Authority (MAS) has repeatedly stated that it has no plans to regulate the industry and wants to provide broad support instead. They embraced the new technology in an experimental project, Ubin.

The project is in partnership with R3 and the aim is to explore the use of Distributed Ledger Technology (DLT) to regulate payments. Although it does not directly affect regulation, Ubin helps to further understand the value that the blockchain can bring to the world.

Singapore also hosts the FinTech Festival, the world’s largest FinTech conference. Over 30,000 people from all over the world participate in this event, bringing a lot of talent to the nation.

Already commonly referred to as the Crypto Valley, Zug is, for the moment, leading the race for the title of blockchain capital and it is clear why. Switzerland has always been historically fairly lenient when it comes to banking and financial regulations.

In addition to this, Zug has some of the lowest taxes in the country and has taken a very business-friendly approach to cryptocurrencies.

The government supports citizens who can pay for certain services in bitcoin and also uses Ethereum in a digital ID system. Even Bitcoin Suisse, the financial services provider behind several high-profile ICOs (Status, OmiseGo, SingularityNET), believes that Zug is a fantastic place for blockchain technology. Entrepreneurs in the area have formed the Crypto Valley Association to encourage the growth of the ecosystem.

The Canton of Ticino

Finally, among the areas that are becoming recognised as innovation leaders in the blockchain sector, it is impossible not to mention the Canton of Ticino, which together with the aforementioned Canton of Zug is among the most relevant in Switzerland.

There are 40 crypto startups in this territory, including Eidoo from the Poseidon Group. 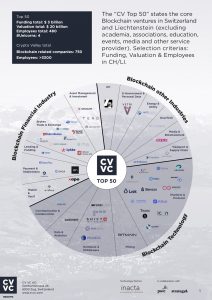 With the decentralised nature of this sector, it is quite impossible that there will be just one blockchain capital. And it’s a positive thing since, ultimately, everyone is on the same team.