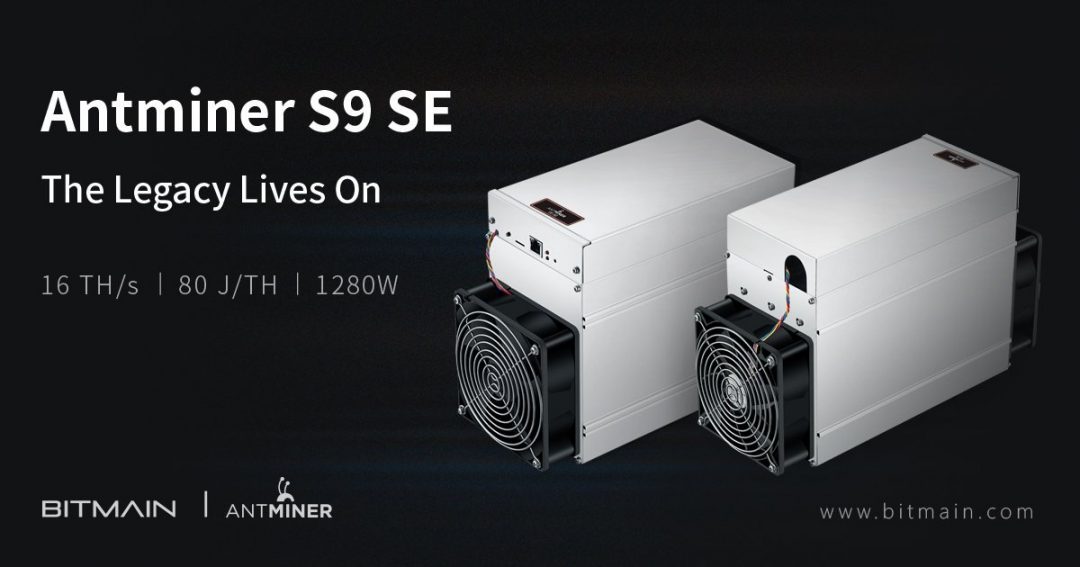 Bitmain: a special version of the Antminer S9 with 16 TH/s

A few hours ago the Chinese mining giant Bitmain announced a new ASIC for bitcoin mining, the Antminer S9 SE. This is an evolution of the Antminer S9, a device launched in 2017 but which the company has decided to upgrade once again before its final withdrawal.

Bitmain, in fact, has already announced for months the new 7nm ASICs for bitcoin mining, capable of reaching hashrates close to 53 TH/s with low power consumption.

It is therefore not clear why the company decided to market this device, which has much lower performance and efficiency than the current best ASICs for bitcoin mining.

This latest Antminer S9 SE is capable of reaching a maximum hashrate of close to 16 TH/s on the SHA256 hashing algorithm, with a power consumption of close to 1280 Watt/hour.

The efficiency, therefore, is almost 80 Watts per TH/s. Unlike the S17 series, there are no low-power modes.

The device will be available for $350 on Bitmain’s official website from 14 CEST today, June 18th, 2019. However, the first units will be shipped on July 21st.

These are probably warehouse leftovers resold as a slightly optimised new product at an affordable price. The device could still be interesting for those who have low or no electricity costs, since at the price of a more efficient 40 TH/s Antminer T17 ($1000), it is possible to buy three Antminer S9 SE, thus reaching a hashrate close to 48 TH/s.

Or, as an alternative to a 53 TH/s Antminer S17 Pro, sold for about $2,000, users can buy six Antminer S9 SE, for a total hashrate of 96 TH/s, capable of generating as much as 0.0033 BTC per day. Obviously, the downside is consumption, that’s why these are solutions almost exclusively suitable for those who have free energy.

Due to the low efficiency of this product, the Bitmain Antminer S9 SE is not among the best ASICs for bitcoin mining.

Previous article Bitcoin: new ATH for hashrate and record of active addresses
Next article 70% of exchanges have joined the CoinMarketCap DATA programme