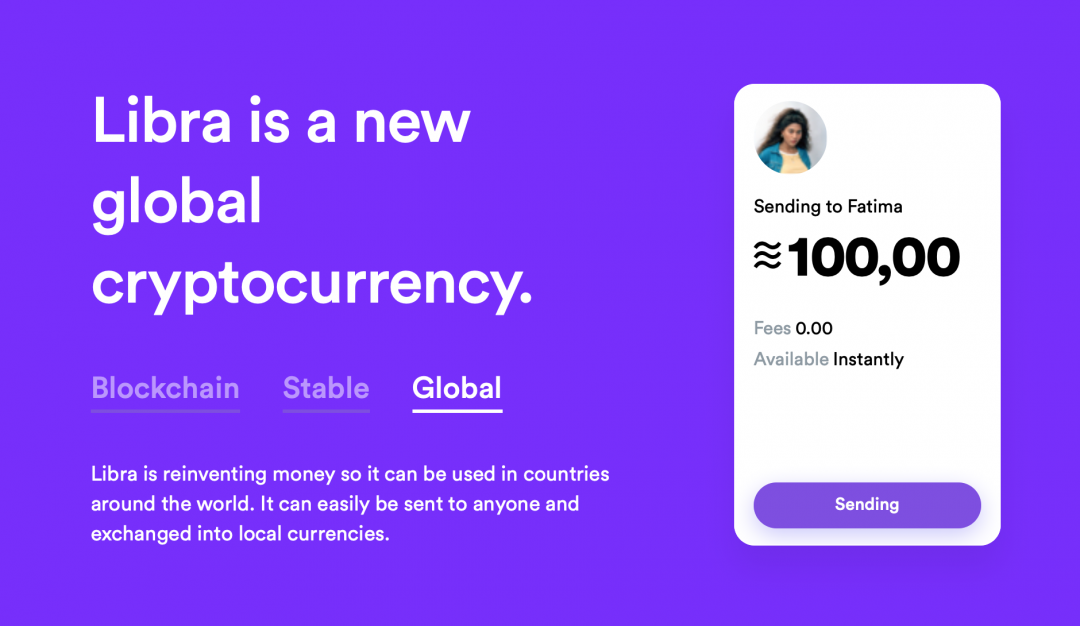 As previously announced, the whitepaper of the Facebook crypto called Libra was released today. The new Facebook Coin comes to life and with it the whole project of the social media giant that makes its entry into the crypto market.

For those who are wondering what the real name of the coin is, now we have the certainty: it will not be called GlobalCoin but Libra and the company will do everything to avoid volatility.

On the various social networks, especially in recent days, there have been several doubts about the centralisation of this cryptocurrency, defined by many as a simple stablecoin or digital currency:

“If it’s centralised, it’s not a real cryptocurrency.”

“The Facebook coin will not be a crypto, but another stablecoin.”

“It’s nothing more than a new currency, without any philosophy or paradigm.”

“It’s a digital currency, not a cryptocurrency.”

As far as the issue of decentralisation is concerned, a source that considers it meaningful to introduce this term into the definition is Wikipedia:

“A cryptocurrency (or crypto currency) is a digital asset designed to work as a medium of exchange that uses strong cryptography to secure financial transactions, control the creation of additional units, and verify the transfer of assets. Cryptocurrencies use decentralized control as opposed to centralized digital currency and central banking systems”.

Investopedia, on the other hand, believes that decentralisation is not a fundamental point but more a sort of possibility:

“A cryptocurrency is a digital or virtual currency that uses cryptography for security. A cryptocurrency is difficult to counterfeit because of this security feature. Many cryptocurrencies are decentralized systems based on blockchain technology, a distributed ledger enforced by a disparate network of computers”.

While the Italian-language encyclopaedia Treccani doesn’t mention it at all:

“Digital tool used to make purchases and sales through encryption, with the aim of securing transactions, verifying them and controlling the creation of new currency; money, virtual currency.”

The same Satoshi Nakamoto, within the Bitcoin (BTC) whitepaper, does not mention any of these terms directly:

Although it clearly mentions centralised authorities:

However, the definition of Facebook’s cryptocurrency remains in doubt. According to differing opinions, there is talk of a cryptocurrency, digital currency and centralised currency.

It is interesting to note that the search term Facebook cryptocurrency, within the United States, has surpassed even ETH, on June 14, 2019, a sign that many users are really interested in understanding what lies behind the so-called Facebook Coin. 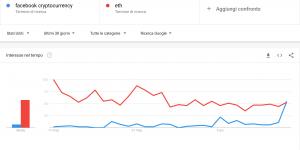 Similarly, the same research has even surpassed the term “cryptocurrencies”, which has certainly lost ground since its hype at the end of 2017. 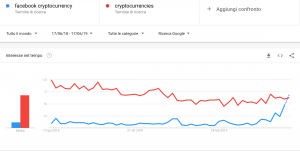 Libra will be a stablecoin. The main purpose of the project is precisely to avoid volatility, so its value will be closely anchored to that of other fiat currencies.

This indicates that if those currencies rise or fall in value, so will Libra.  However, unlike most cryptocurrencies, there will be no sharp price fluctuations.

This will be exactly the behaviour of the Facebook cryptocurrency: Libra.

Precisely for this reason, those who operate within this sector in order to speculate on the trend of cryptocurrencies and the abrupt fluctuations that characterise most of them will certainly not find what they are looking for.

Mark Zuckerberg wants the Facebook crypto to be a truly effective digital currency that can be spent by users every day.  This is not intended to be seen as a store of value (in other words, it has nothing to do with Bitcoin) but rather as an alternative to current currencies.

Facebook coin: here are the companies that will be part of the Libra Association

From music to payment providers, from e-commerce to telecom giants, Facebook has found several investors who have decided to join the project and the consortium nicknamed Libra Association.

Facebook guarantees each member of the consortium the management of a node, to access and retrieve data from the network, for the modest sum of 10 million dollars.  Initially, the company’s ambition was to involve Wall Street, but it found a lack of interest among institutional giants such as Goldman Sachs and JPMorgan.

The social media giant is pushing to achieve a hundred participants.  If successful, Facebook would be able to inject into the network 1 billion dollars raised by the 100 companies which it hopes to include in the project.

Unmissable big names and financial institutions that will finance the Facebook coin:

Facebook is not the only member of this section, there’s also Calibra, a subsidiary of Facebook itself, set up to help the social media giant in managing the Libra project.

A few more words need to be said about this. The calibra.com website is online and working. It shows a preview of what Libra is, how it works and how to send and receive the token:

From the first images, it is possible to notice the presence of the crypto both within Facebook Messenger and WhatsApp. Calibra will also be available as an app for iOS and Android where it will be possible to exchange Libra tokens.

“The first version of Calibra will support peer-to-peer payments and a few other ways to pay such as QR codes which small merchants can use to accept payments in Libra. Over time there will be many others including in-store payments, integrations into Point-of-Sale systems, and more”.

The whitepaper is available at this address while here is the more technical explanation of the whole ecosystem, from the transactions to the Blockchain used.

All three platforms deal with e-commerce, selling goods and services online that range across different markets.

Problems for the Winklevoss twins: Libra vs Gemini Dollar (GUSD)

The Winklevoss twins spoke at CBS Sunday Morning a few days ago, just before their rival, Mark Zuckerberg, prepared to announce Libra, the new Facebook coin.

Tyler and Cameron told CBS that they are absolutely not worried about the launch of Facebook’s cryptocurrency.

“There’s so much pie to grow, I mean, at this point, we need to be frenemies”.

said one of the twins.

However, despite their statements, it is inevitable to consider the fact that the Facebook coin will take away a slice of the market from the Gemini Dollar (GUSD) created by the Winklevoss twins.

According to the whitepaper, Libra will be developed on the Libra Blockchain and will also be supported by the Libra Reserve, a real reserve that will provide the cryptocurrency with stability, low inflation, fungibility and global acceptance.

The Blockchain we are talking about will be open source with an Apache 2.0 license. The presentation of Facebook’s crypto, together with the whole ecosystem that revolves around it, is certainly Facebook’s most daring foray into financial services.

From now on, the social media giant is able to give billions of people the opportunity to access payment systems without having to resort to banks.

Will Chainlink (LINK) be included in the project?

Last week, Google published a post on its Google Cloud blog, which details how off-chain data can be included in smart contracts using the decentralised Chainlink platform (LINK).

This event pushed the LINK token value up by 60%. Recently there has also been talk of how Facebook’s crypto, Libra, could adopt this technology.

Since it is a stablecoin, anchored to several fiat currencies, they may require the technology offered by Chainlink (LINK) to manage these values in a decentralised manner. In addition, Facebook’s Director of Engineering, Evan Cheng, is also a technical consultant for Chainlink (LINK).

TON, Telegram’s cryptocurrency, should not be underestimated

Facebook and Libra could face tough competition before the official launch in 2020. Telegram, the popular messaging platform, is making its way into the community.

The sale of the token was facilitated by the Liquid exchange and Gram Asia, one of the accredited investors who took part in TON’s initial ICO.

Unlike Facebook, however, Telegram has been rather loquacious about its project and how it would impact the global payments market. They recently provided further details on the launch of the Telegram Open Network (TON) test client and the Fift programming language.

Facebook has a business model based on targeted advertising, both on Instagram and on Facebook itself. Surely, thanks to Libra, it will be able to generate other revenues, however marginal they may be.

Although a TechCrunch report released this month indicates that the Facebook crypto will have no fee (and therefore no revenue on the token transfer), some people doubt that the social media giant will maintain this standard in the long run.

Facebook must understand how to really monetise Libra, not only for itself but also for the many companies that have joined (and will join) the Libra Association. Visa, Mastercard, Booking, Spotify, Coinbase and many others clearly expect to get some kind of financial advantage from this partnership.

According to the whitepaper, the use of the Facebook coin will

“ensure low transaction fees and pay dividends to investors who provided capital to jumpstart the ecosystem”.

The Facebook coin has nothing to do with cryptocurrencies

Nouriel Roubini, a US professor and economist, has openly declared that Libra, the Facebook crypto, has nothing to do with cryptocurrencies:

“It has nothing to do with blockchain. Fully private, controlled, centralized, verified and authorized by a small number of permissioned nodes. So what is crypto or blockchain about it? None”.

Roubini is not the only sceptic of the project promoted by Facebook, which is potentially able to drastically change the financial system as we know it today. There are many other critics and fans of a token that, at least for the moment, is defined by the whole world as the Facebook cryptocurrency: Libra.