The Bitcoin Misery Index (BMI) is an indicator created by Thomas Lee, a well-known Wall Street analyst and co-founder of Fundstrat Global Advisors.

He is one of the few, perhaps the only major Wall Street analyst, to regularly publish reports and formal price targets for bitcoin. This is a relatively new index dedicated to bitcoin: it is not an indicator used in classical technical analysis such as moving averages or the ADX.

The BMI is intended to be a tool for bitcoin traders. It is calculated on a scale from 0 to 100, taking into account factors such as volatility and the number of winning trades with respect to the total. When the indicator is low it is time to buy while when it is high it means it is time to sell. The index assigns the value 100 to positive sentiment and 0 to negative sentiment. 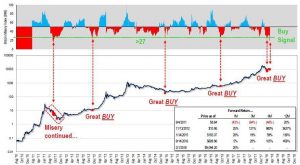 “When the Bitcoin Misery Index is below 27 then it is a good time to buy while a signal above 67 indicates that it may be time to sell”.

these were Lee’s words in a CNBC report.

Previous article Momentum: one of the simplest and most intuitive financial indicators
Next article Delayed Proof of Work: the multi-blockchain consensus algorithm