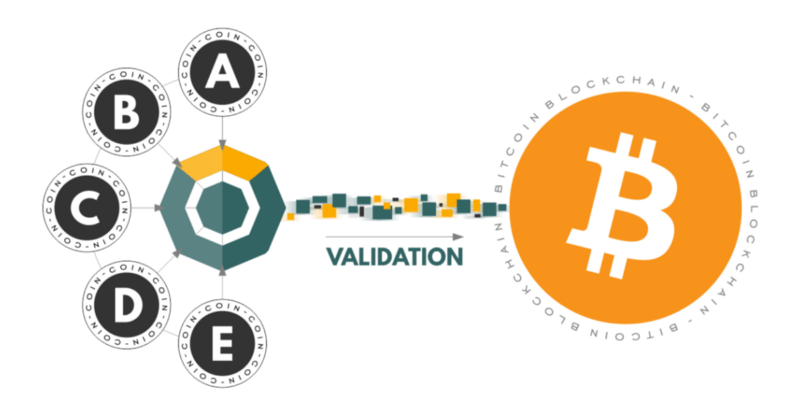 There are now dozens and dozens of consensus algorithms for various blockchains.

Among the many, there is also the lesser-known delayed Proof of Work.

The delayed Proof of Work is a variant of the classic Proof of Work (PoW) and uses a second blockchain to validate another chain.

The delayed Proof of Work (dPoW) is a hybrid consensus mechanism that allows a blockchain to take advantage of the level of security provided by the hashing power of a secondary blockchain.

This is achieved through a group of notary nodes that add data from the first to the second blockchain. Consequently, this also implies that both blockchains must be compromised in order to jeopardise the safety of the dPoW chain.

The first currency to exploit this method of consensus was Komodo, whose dPoW is linked to Bitcoin’s blockchain.

Naturally, the delayed Proof of Work can take advantage not only of the classic Proof of Work (PoW) but also of the Proof of Stake (PoS). The dPoW can be used using one of the many blockchains available. However, Bitcoin’s hashrate currently provides the highest level of security for consensus on dPoW systems. In the following diagram, it is possible to see the relationship between the individual entries, the primary blockchain and the connected PoW chain. 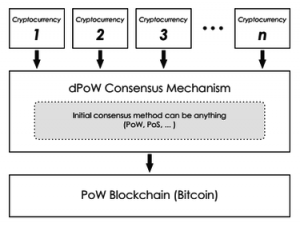 Within a dPoW system, there are several types of nodes: notary and normal ones. In the case of Komodo, the 64 notary nodes are elected by the dPoW stakeholders to add (authenticate) the blocks confirmed in the dPoW blockchain from the connected PoW chain.

Once a block has been completed, the hash is added to a Bitcoin transaction signed by 33 notary nodes, thereby creating a dPoW block hash record on the Bitcoin blockchain.

To prevent the so-called mining wars between notary nodes, with the consequent reduction in network efficiency, Komodo has devised a mining method that works in two ways.

The dPoW consensus algorithm is designed to allow the blockchain to continue to work without notary nodes. In such a situation, the dPoW blockchain may continue to operate on the basis of the initial consensus method. However, it would no longer have the additional security of the connected blockchain, thus losing the main feature. 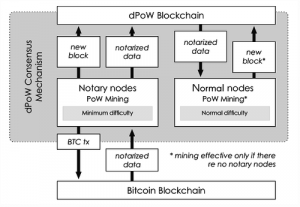 The dPoW consensus algorithm, therefore, offers greater security and reduced power consumption. For example, since Komodo uses the Equihash mining algorithm and exploits the round-robin method for mining by notary nodes, the incentives are structured in such a way as to avoid that competition between nodes can lead to excessive energy consumption and waste of computing resources.

In addition, the dPoW consensus algorithm can add value to other blockchains by indirectly providing bitcoin security without having to pay the cost of BTC transactions.

Finally, the separate functions of notary and normal nodes within the system ensure that the initial consensus mechanism continues to work in the event of failure of notary nodes.

One of the main advantages is the increased energy efficiency but above all the higher security rate guaranteed by the system. Secondly, it adds value to other blockchains by indirectly providing the security of bitcoin. All this without paying the cost of the transactions of BTC or other PoW chains used.

But there are also disadvantages. Only solutions using PoW or PoS can be used as support chains. In addition, in the Notaries Active mode, the hashrate for several nodes must be calibrated appropriately, otherwise, the difference between the hashrates between the various nodes can literally explode.

Previous article Bitcoin Misery Index: the indicator of Thomas Lee
Next article Blockchain in manufacturing: a market of $566 million in 2025