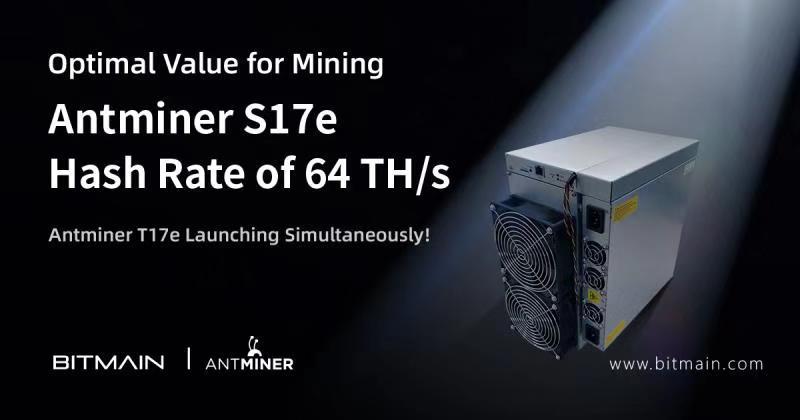 Bitmain has announced a new range of high-performance ASICs – Antminer S17e and T17e – for the mining of bitcoin and all other Proof of Work-based coins with the SHA256 hashing algorithm.

Precisely for this reason, the energy efficiency is similar to that of its predecessors, amounting to 45 watts per TH. Only the old Antminer S17 Pro is able to achieve higher efficiency, touching 36 Watts per TH using the high-efficiency mode.

The new bitcoin mining ASICs offer unprecedented performance among Bitmain models, given that the new Antminer S17e is able to deliver a hashrate of 64 TH/s, while the younger brother T17e achieves 53 TH/s.

The higher performance of the S17e, compared to the old model, is explained by the higher chip density on the same motherboard. The device is slightly larger than the S17, most likely due to the more powerful PSU.

Not many details have been revealed yet, but it seems that the new models offer only one high-performance mode of operation. The Antminer S17e will thus achieve 64 TH/s out-of-the-box, with a power consumption of 2900 Watts per hour, for an energy efficiency close to 45 Watts per TH.

The dimensions of the Antminer S17e are 304 x 175.0 x 338 for a weight close to 12 KG including power supply, which is supplied. The price has not yet been announced, but it is very likely to be close to three thousand dollars. It is expected to be available in November of 2019. More details can be found on the official Bitmain website.

The Antminer T17e is the successor to the T17. Like the latter model, it does not shine in performance and efficiency but was born as an economic bitcoin mining solution, intended for those who have electricity at very low or zero costs. In fact, the device can reach 53 TH/s at 2900 Watt, thus obtaining an efficiency close to 55 Watt for TH.