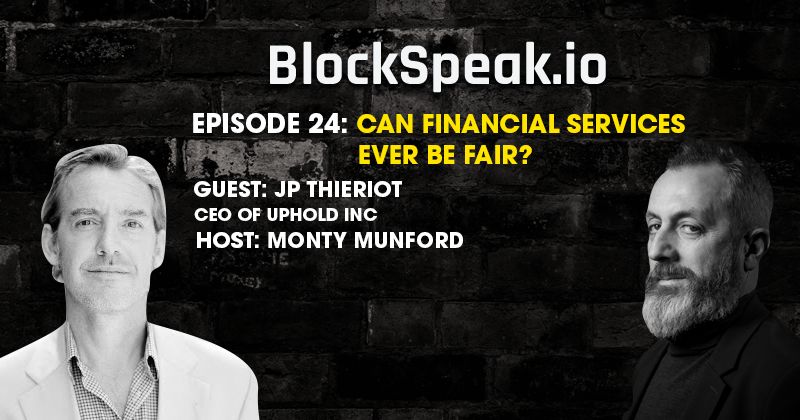 Can Financial Services ever be fair? Listen to JP Thieriot

Blockspeak had JP Thieriot taking up the subject of financial services and how it has evolved so far since the late 90s.

JP Thieriot is the CEO of Uphold, the platform allows users to transact across more than 60 different currencies and commodities, including several major digital currencies and precious metals.

Talking about finance and the internet side-by-side, JP acknowledged Bitcoin and how it has solved all the long-standing issues of finance.

“If you think about every industry that the internet has torn down to the studs and then rebuilt in its own image – It’s every single industry except for one, which is finance”, Theriot explained.

“Money is 1s and 0s with just an extra dimension of value and spendability, and the long-standing issues are solved”, he continued.

Now since the entry barrier has been removed, we will witness a new wave of users – solving the problems of financial inclusion.

JP also conceded how nobody is talking about the enormous risks of quantitative easing.

“I don’t hear anybody saying –  Don’t carpet-bomb the world with cash because you would have some serious problems. The entire hospitality industry is on the streets begging for food….. You have trillions and trillions of dollars of currency debasement and I don’t think any country is relatively better off other”.

When the market becomes too flooded with money, it can lead to inflation. While Quantitative Easing may show some positive impact on the economy; however, most of the time these positive impacts are only for short-term, QE is not designed to be used over the long-term. QE can modify the currency of the country in which it is executed – conceivably devaluing it, making imports more expensive and thereby also driving up the cost of production as well as consumer prices.

“So what are the two things that stand apart from Fiat currency? Most notably it’s Gold and Bitcoin. So both are enormously benefitted, right? There is no way that the Gold and Bitcoin are not going up in relative terms”.

“We aim to democratise access to investments as well as enable very easy cross-border 24/7 p2p transactions. July was an interesting month because we crossed 3 millionth user.”

The firm launched their new ‘Anything to Anything’ interface in January that enabled users to fund their accounts, make transfers, and trade directly between more than 60 cryptocurrencies, fiat currencies, and metals, using just one screen.

A 55% increase in crypto transactions in Africa
Burgerswap: a new DEX on the Binance Chain

Blockchain Ladies gadgets for sale on The Crypto Merch for charity