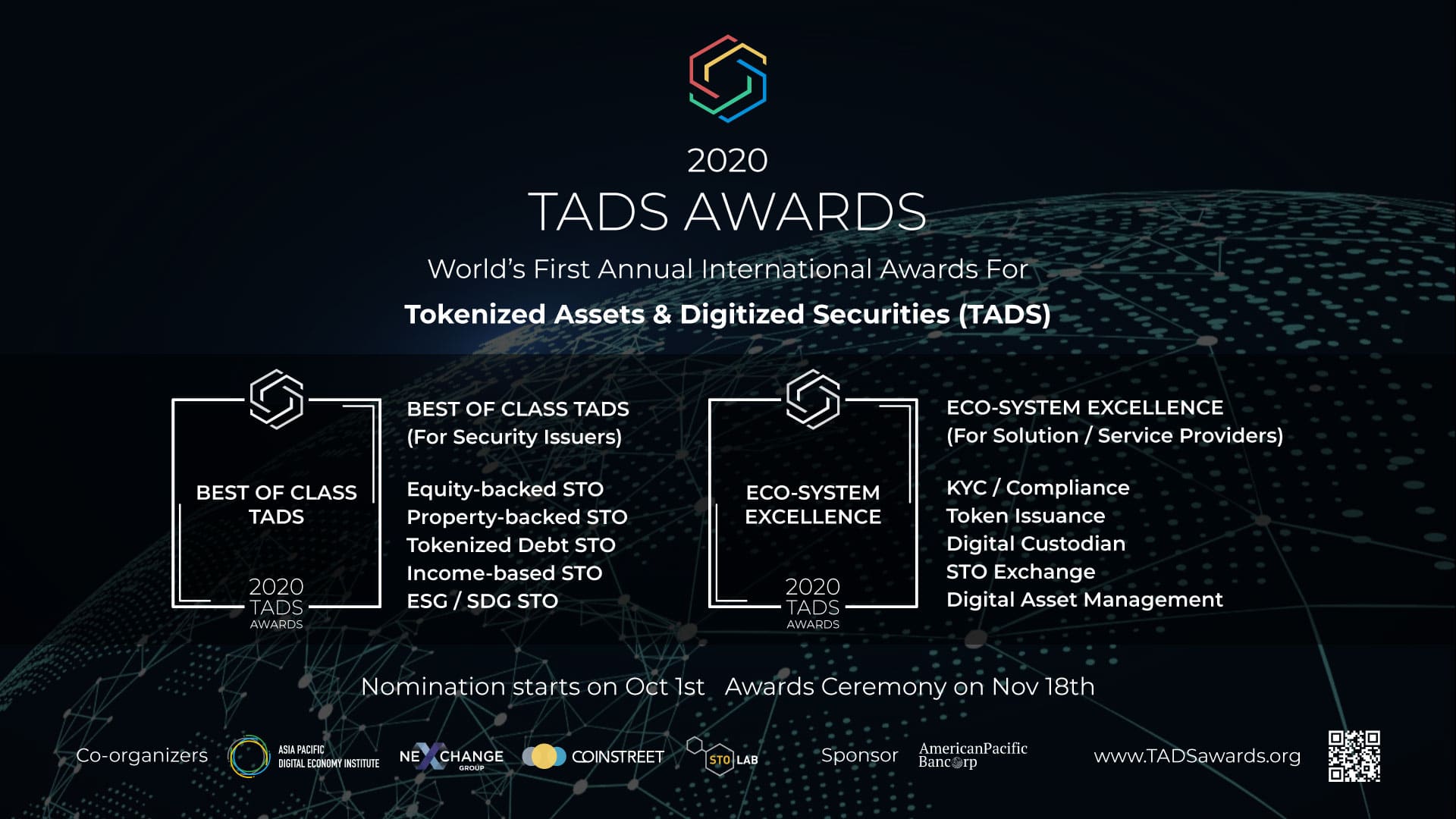 TADS AWARDS (which stands for “Tokenized Assets & Digitized Securities Awards”) is the world’s first annual international award for the asset tokenization and digital securities sectors. It celebrates these industries by recognizing and honoring significant contributions and distinguished achievements worldwide.

Hosted annually, TADS Awards gathers together individuals and businesses to share the energy that tokenization brings to the financial markets around the world.

The World Economic Forum forecasts that by 2027, 10% of the world’s GDP will be tokenized — with an estimated market capitalization of US$24 trillion. TADS Awards nurtures the growth of TADS industries by jointly establishing “best practices” and setting “measuring standards” for high-quality tokenized assets and digitized securities through close collaboration with other industry leaders on the global market.

“TADS Awards create important recognition for best of breed ideas and solutions in emerging technologies like Blockchain and Digital Assets. Such a platform not only aids in creating awareness, but also fosters a healthy competitive spirit that is vital for progress and growth of the industry imperatives,” said Nitin Gaur, Director of IBM Financial Sciences and Digital Assets.

“The TADS Awards recognise pacesetters in a breakthrough area of activity which Somerley believes has the potential to disrupt and enhance the provision of financial services.”

“Asset tokenization is not the future, but the present, It’s happening in front of our eyes. As our industry emerges as a whole, it’s important to recognize outstanding projects and the pioneers behind them, who are paving the way for a more accessible, efficient and transparent financial future,” reflected Emi Lorincz, Board Member of the Crypto Valley Association.

“As the digital technology flagship of Hong Kong and home to the largest FinTech community with over 360 FinTech companies, we are committed to strengthening Hong Kong’s international finance centre position under the digital economy era.TADS Awards is a strong impetus in recognising innovative and impactful solutions in the digital asset area. We look forward to seeing winning solutions under TADS Awards being brought to a new stage of development.”

“One of the most important use cases of Blockchain will be the tokenization of assets. The convergence of regulation, technology and acceptance are coming together to make this happen,” said Juwan Lee, Founder & Chairman of NexChange Group.

“Digital assets are one of the most transformative forces shaping the new frontier of the financial service industry,” said Samson Lee, Founder & CEO of Coinstreet Partners. “Working with other leading industry players to drive the future development of tokenized assets & digitized securities is truly momentous.”

TADS Awards welcomes nominations starting from 1st of October until 3rd of November 2020. A total of ten winners will be selected from two awards categories (five awards for each category) :