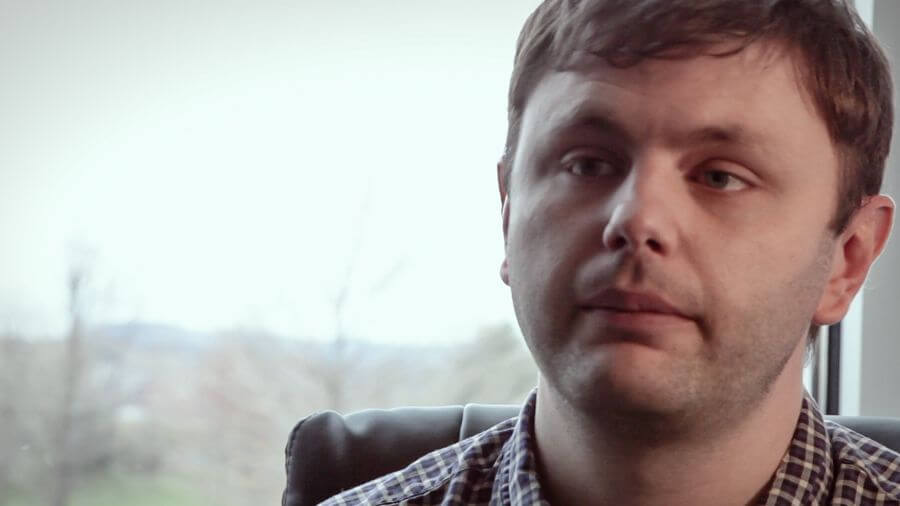 The Ethereum network is currently processing as many transactions as it can and has 18,645 unconfirmed transactions according to blockctivity. The Eth gas prices have been rising and the community is pointing its finger at EOS — more specifically Block One — as the responsible.

Last week the ETH gas prices grew to over 80 Gwei.

A big part of the responsibility for this network congestion should be attributed to FCoin — a Chinese cryptocurrency exchange — that has drawn criticism from the crypto community for flooding the Ethereum network with insignificant transactions.

The transactions that the FCoin exchange generates are caused by the way it lets the community decide which tokens are added. For a token to be listed on FCoin, blockchain project developers must issue the project tokens to each user in the FCoin Exchange.

This results in a mass distribution of on-chain transactions to hundreds of thousands of users. But FCoin alone doesn’t explain the network congestion.

The accusations which have been expressed by many members of the crypto community (even ETH developers) seem to have some actual basis — and surprisingly so. It seems that yesterday 40% of the ETH network capacity was used by one smart contract. What’s even more odd is that this particular smart contract is a default ERC20 contract, which is apparently pointless. All of that is really suspicious.

A detailed description of the iFish token activity would be unnecessarily complicated and boring to most and is beyond the scope of this article. A detailed report on the matter can be found here. That being said, while some quite odd activity is definitely taking place on the network, there seems to be no reason to think — or at least to be sure — that Block One is involved. The only reason why EOS is blamed is that the activity of the contracts — which is pretty costly — seems to be funded by selling EOS for ETH. That means that any big EOS holder could be responsible.

Block one CTO answers to accusations

Dan Larimer — Chief Technical Officer at Block One — has lately responded to the accusations in the official Telegram chat. 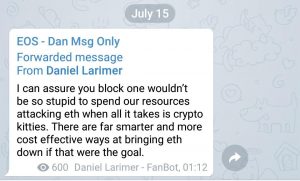 While the answer definitely seems to be provocatory (especially the part where it is suggested that there are smarter and more cost-effective ways to “bring eth down”) it seems that Dan has a point. If a network can be congested by a simple collectable cards game the network simply isn’t functional.

The idea that Block One is responsible for the current Ethereum network congestion can’t be proved or disproved. The conclusion that can be drawn from all of this is that the ETH blockchain isn’t ready for mainstream real-world usage — which shouldn’t come as a surprise. The infrastructure underlying extremely important services that many businesses are based upon shouldn’t be that easily congested.

That being said, this is probably going to change in the future. Sharding, full POS (Casper), Plasma/Plasma Cash should solve or at least attenuate this issue. Still, for the time being, ETH isn’t ready to go mainstream.

Previous article BlackRock, a task force to study the crypto-sector
Next article Peter Thiel and Bitmain invest in the EOS platform