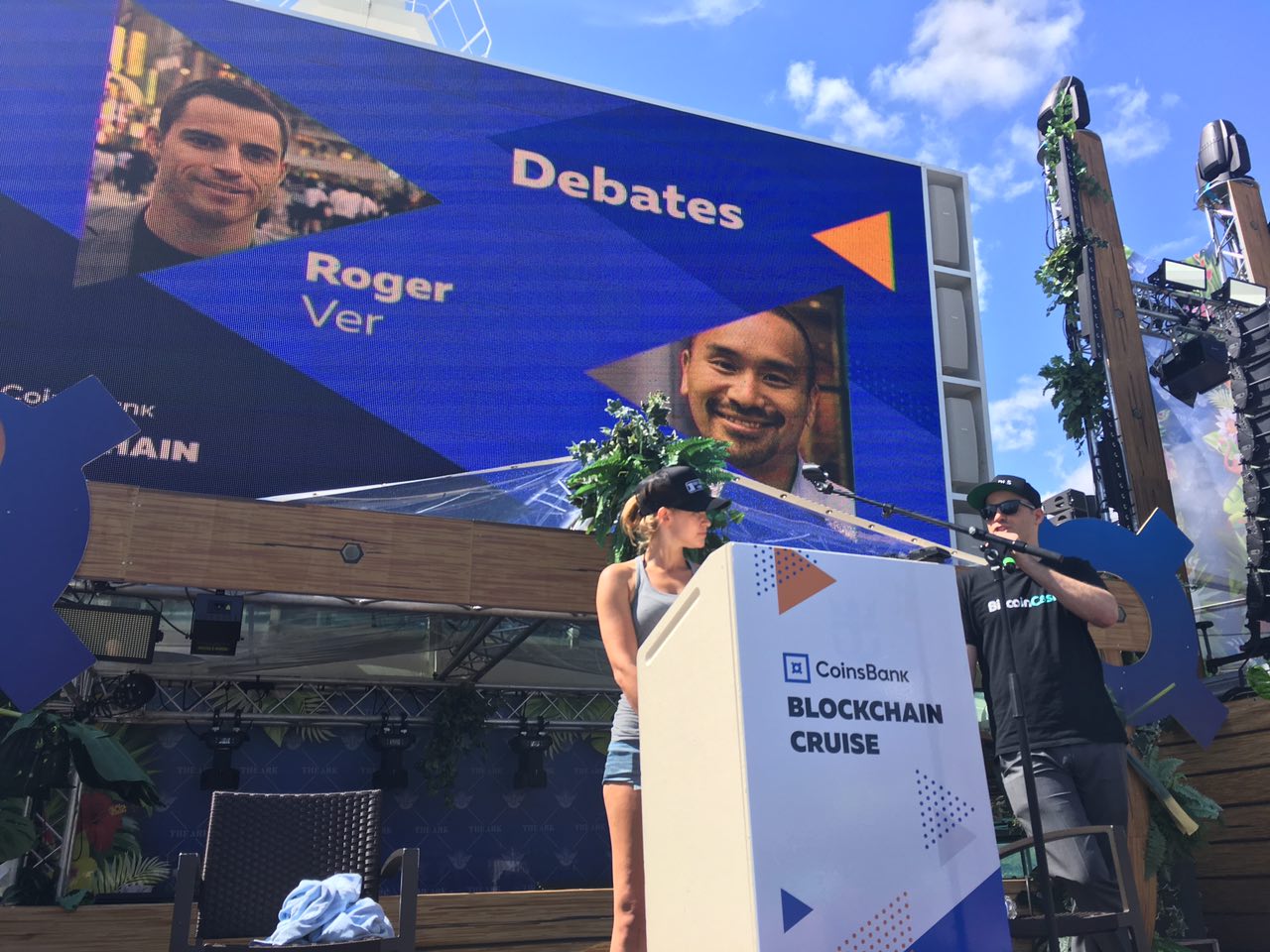 The conferences on the Blockchain Cruise continue during this last day along the coast of Ibiza. Today the most anticipated event is the debate between Jimmy Song and Roger Ver on the topic of Bitcoin vs Bitcoin Cash.

Rather than a stage, it should be a ring because the arguments are many and the audience cheers and intervenes in a heated way against one or the other.

After an amusing and embarrassing issue about Song having 1 minute more than Ver to speak as moderator, the debate starts to get into the technical part.

“That’s why no one wants to have a debate with Roger, he always does things like that. I still want to thank Roger because he did so much for Bitcoin, especially at the beginning. But I want to say this: Bitcoin cash is like a fiat currency […] it is corporate, centralized, paternalistic and the economic incentives can be changed. If you see there are T-shirts and stands of Bitcoin.com everywhere, as happens during all blockchain conferences, Bitcoin cash has no reason to exist. BCH has a roadmap that everyone has to follow to stay in the project“.

Roger Ver responds to this attack with a provocative bet of 1 million: “in 10 years Bitcoin Cash will have a market cap higher than Bitcoin“, says Ver, but Jimmy Song refuses and says that Ver has no arguments to continue the debate.

In fact, it seems that Ver has interesting arguments and the public likes his way of speaking: while Jimmy is particularly composed and reads his speech, Roger Ver is more instinctive and extrovert and intervenes as a true leader who defends his creature.

And that’s where the problem is: Bitcoin Cash seems to be his company, meaning it’s a centralized project.

“The BTC community controls everything with totalitarianism because it hunts anyone who doesn’t agree and deletes all posts and bans you if you don’t agree with them. Bitcoin Cash is not like a fiat currency because nobody obliges you to use it, instead governments oblige you to use fiat currencies and tax you. Cryptocurrencies are the money of freedom. I do not care which crypto you want to use, they give an alternative to the government’s impositions. Bitcoin Cash transactions are fast and with low fees, that’s why I promote Bitcoin Cash and will always do so“.

Ver explains that he doesn’t care if people use Bitcoin Cash in particular, but only that the use of cryptocurrencies prevails, in this continuous struggle against governments and fiat currency.

But Song points out that Ver treats the subject as if it were his company, and as if he will always have an involvement in the development of the project:

“Fiats are authoritarian, which is why I say that Bitcoin Cash is like a fiat currency while bitcoin is meritocratic, you have to know how to contribute as a developer. With bitcoin no one has a job forever, it’s all meritocratic.”

Then Tone Vays intervenes, who was first in the swimming pool enjoying the show; the debate continues with Vays taking the place of Song who leaves the stage with his tail between his legs.

“Bitcoin doesn’t do marketing, that’s why it might have a lower market cap. Look instead at how many people work for Bitcoin.com,” says Vays.

Finally, there are some questions from the public that continue to cheer as if they were at a football game. This proves what Brock Pierce said yesterday during his debate: “What makes the difference in a project is the ability to create a community“.