The Wall Street Journal accused Shapeshift the past Friday of being responsible of recycling $9 million. Shapeshift claims in a blog post that the facts that served as a basis for the WSJ accusations were “factually inaccurate and deceptive.”

The post is authored by Erik Voorhees — the CEO of the company — and he claims that they “have worked with the journalists for 5 months under false pretences.”

It is easy to assume that the article that is being discussed is quite sensationalist just by reading the first three lines:

“A North Korean agent, a stolen-credit-card peddler and the mastermind of an $80 million Ponzi scheme had a common problem. They needed to launder their dirty money. They found a common solution in ShapeShift AG[…]”

Still, this is to be expected by mainstream media. A more interesting fact is that — according to Voorhees — WSJ “omitted relevant information.”

The journalists apparently tried to analyze two years of blockchain data and, as Voorhees put it the “authors do not have a sufficient understanding of blockchains and our platform in particular.”

The conclusion that the WSJ got out of the analysis that $9M has been recycled on the exchange and the Shapeshift explains why it seems not to be true. What’s more, the WSJ omitted that — even if that were true — then this would still represent only about 0.15% of the total Shapeshift money flow. 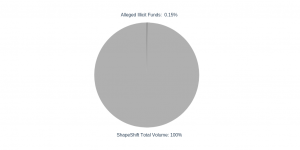 “The article singled-out ShapeShift and implied that the company is a bastion of illicit activity because it hadn’t previously required user information–despite that same data showing that other exchanges (which did take user information) had similar figures.”

What’s more, Shapeshift claims that many relevant facts that have been shared with the journalists haven’t been included. For example, there was no mention of the claim by the company that it has offered “valuable assistance in over 30 investigations in 13 different countries” or about the collaboration between Shapeshift and other exchanges to block illicit activities, not even the fact that Shapeshift blocks entire countries that are on the sanction list.

The post goes on by examining some of the analysis performed by WSJ and concludes:

“In other words, $600 of suspicious funds were sent to an exchange that wasn’t ShapeShift. Because ShapeShift happens to be a customer of this same exchange–10 months later in a completely unrelated transaction–the exchange sent funds to ShapeShift. The authors didn’t understand how to properly read the blockchains transactions, so they assumed there was $70k in “dirty money” sent to ShapeShift.”

While the general public is becoming increasingly aware of the existence — and even of the potential — of Bitcoin and other cryptocurrencies, the mainstream media’s sensationalist tendencies will keep demonizing them as long as people won’t stop believing them or will get bored of it.

Such reaction is typical to any new technology and reminds of the alarmism about AI, microwaves, and even internet itself. It is something expected to get better with awareness and adoption.