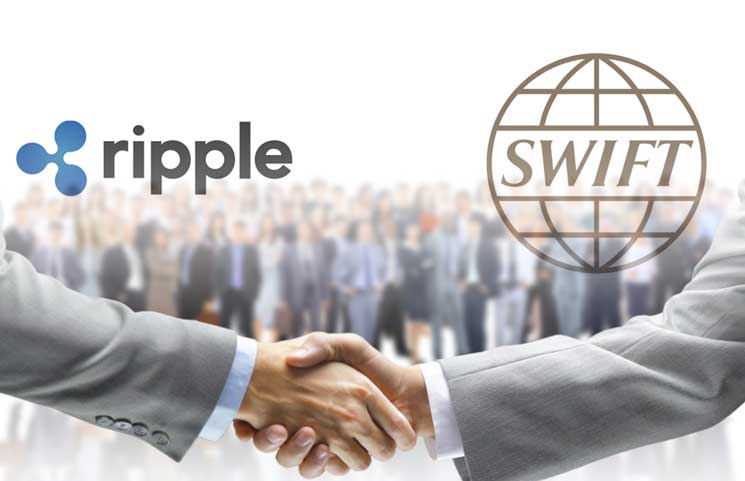 The partnership between Ripple and Swift has been denied

For a few days now there have been rumours of a possible partnership between Ripple and Swift.

Ripple is, in fact, proposing itself to the market as a competitor of Swift, particularly with regard to cross-border payments in multi-currency, a partnership between them could have closed the issue.

Instead, Swift has categorically denied that there are partnerships in place with Ripple.

In an interview with Finance Magnates, a company spokesman denied these rumours to journalists who contacted him to obtain official statements on the matter.

“I’m not sure where those rumors are coming from but the upcoming standards release […] is entirely unrelated to RippleNet. Its primary purpose is to ensure all payments include a tracking reference (UETR, Unique End-to-end Transaction Reference) which will allow banks to track their GPI payments end-to-end in real time”.

While they are direct competitors, the difference in capital and influence in the world of finance is too big to really think of Swift’s current interest in a partnership with Ripple.

However, Harry Newman, head of Swift’s banking sector, told the Financial Times in June: “It is no secret that correspondent banking is a 1998 model and we are busy addressing that, bringing it to a 2018 model”.

That’s why the company has started testing with blockchain technologies, which seem to have given very positive results and this may suggest that instead of relying on a third party service they can end up developing and using their own platform.

Previous article McAfee, a tattoo dedicated to Skycoin
Next article Bitcoin SV vs Bitmain, “Craig Wright is a Blocktream spy”

BitMart hack: users will be reimbursed