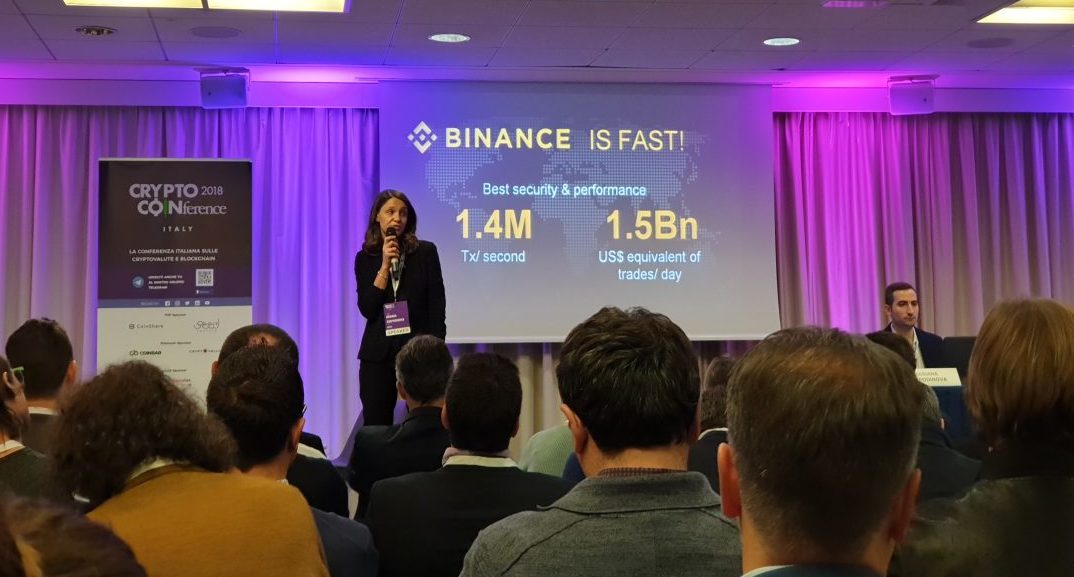 Mariana Gospodinova, COO & Head of Operations at Binance in Malta, spoke at Crypto Coinference in Milan about the platform’s plans and future.

Although the project was only launched in mid-2017, the exchange has now already around 7 million users worldwide, with a trading volume of more than one billion dollars a day.

The great success achieved has allowed the company to start expanding its activities outside of the field of cryptocurrency trading.

On that note, last month Binance Uganda was launched, a new Binance exchange based in the African country, which also accepts fiat currency.

In just a few weeks, this new platform has already gathered 40,000 users, giving hope also for similar platforms that will be launched in the future.

During her speech at Crypto Coinference, Gospodinova also admitted that adding fiat currencies to a crypto-only exchange is quite complex, especially from a regulatory point of view, and it is probably not a coincidence that the company has chosen Malta as its operational base in Europe: the country is, in fact, part of the European Union, and as its national currency uses the Euro, but it also has a law favourable to crypto companies.

The real news, however, comes from the company’s activities outside the exchange.

First of all, an incubator called Binance Labs has been created in San Francisco, which will help companies and organizations to develop and implement interesting ideas in the crypto field.

Binance is always very selective in choosing which projects to focus on, as demonstrated by the fact that less than 3% of the tokens proposed to the exchange are accepted and listed, but anyone can send their idea for it to be considered.

In addition, Binance Launchpad, a token sales platform for the most interesting crypto projects, has also been created to help entrepreneurs launch their own tokens.

To these two projects should be added the Academy, launched as early as August this year, and the Charity Foundation, launched last month.

Binance is, therefore, transforming into a real ecosystem that revolves around the exchange and the tokens listed in it, but that also deals with activities to support the creation of new projects and the use of the tokens themselves.

Previous article Snarks, an answer to scaling Ethereum
Next article Crypto prices will either take off or crash, it's the moment of truth for BTC