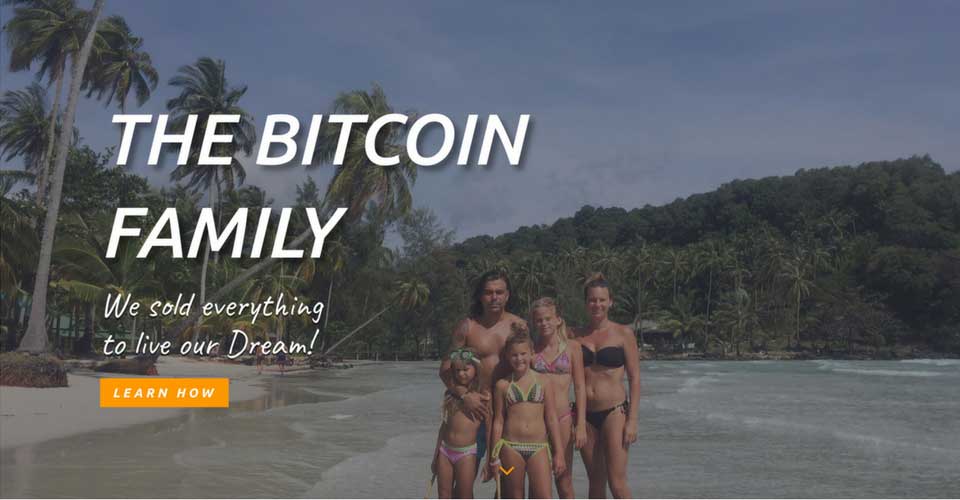 Didi Taihuttu, the family who bet it all on bitcoin

Last year Didi Taihuttu sold almost everything he owned to buy bitcoin (BTC). His family moved to a bungalow and now on his Twitter profile it says: “The Bitcoin Family: we sold everything to live our dream”.

Thomas Di Fonzo of the Wall Street Journal made a ten-minute documentary – published on YouTube – after following for a year the adventures of the “Bitcoin Family” who bet their future on the success of decentralized cryptocurrency.

In December 2017, during the bubble that brought BTC to the highest values ever, while getting the Bitcoin symbol tattooed on his forearm, Didi Taihuttu answered the question about what Bitcoin represented for him: “Freedom. I’m not part of the system anymore”.

The belief that drove him to do this was that not only was the Bitcoin revolution inevitable but that it had already begun.

However, he now lives in a trailer with his wife and three children, who are officially “homeless people”. The children don’t go to school because, according to Didi Taihuttu, the school teaches the past, while instead the children must be educated on the future: a decentralized future.

Taihuttu began buying bitcoin in February 2017, when a BTC was worth just over $1,000 and continued to buy them until November when the price had risen to $9,000.

Taihuttu taught basic computer science in private courses for 10 years. At one point, however, he explained that he realized that “it wasn’t life” and decided to sell everything, reduce his family’s consumption to a minimum and move to a bungalow inside a trailer park.

An important role in this decision was played by the death of his father, a hard worker who did not have time to enjoy life.

Taihuttu says he is happy to live in the middle of nature, instead of in the classic terraced house where he used to live and now has more free time to spend with his family.

His goal is to live in a very minimalist but happy way. For now, he has lost about 60% of his investment but continues to believe in Bitcoin.

The “Bitcoin Family” has become a real brand, and travels all over Europe in a trailer to talk about Bitcoin. He doesn’t have an exit-strategy: his bet a one way street. His goal was not to become a millionaire but to change his life and for this reason, he declares himself happy to have succeeded.

Sustainable Bitcoin mining: will Tesla rehabilitate payments?
When will the lawsuit between the SEC and Ripple end?