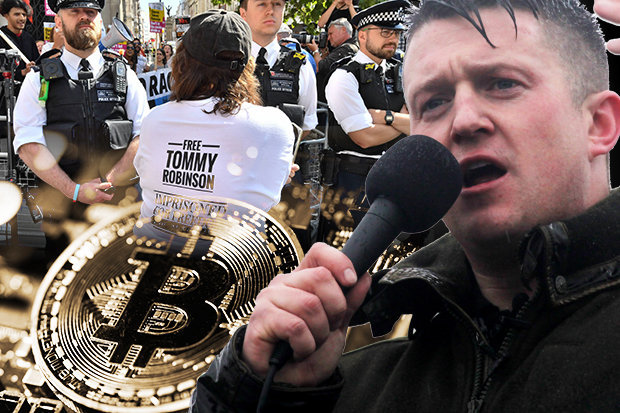 Freedom of speech: what does it mean? It means being able to express one’s opinions freely, whatever it may be, provided that one does not violate the law.

After receiving a warning from PayPal, Tommy Robinson, a British right-wing commentator and activist, decided to accept bitcoin donations (BTC).

A few days ago, in fact, Robinson published a post on Facebook in which he shows a screenshot of a warning received from PayPal that he had been “banned”.

“We’ve noticed activity on your account that’s not in line with our user Agreement, so we can no longer offer you PayPal services. Any bank account or credit card details attached to your PayPal account can’t be removed nor can they be used to create a new account. You can still log in and see your account information but you can’t send or receive money. Any money in your balance will be held for 180 days, after which we’ll send you an email with instructions on how to transfer your money.”

In other words, PayPal has blocked the funds of a private citizen only because he has not complied with the policies imposed, preventing him from using the service.

At this point, Robinson replies on Facebook saying: “Screw Paypal and the establishment if you still want to support me you can do so without Paypal at www.supporttommy.com or using Bitcoin wallet 3MspPzwvsAwNHG2UsFMXzA6LVhHRqzajRc“.

PayPal then responded by saying, “We do not allow PayPal services to be used to promote hate, violence, or other forms of intolerance that is discriminatory“.

Similar problems have also been encountered by other people or organizations active online, such as Wikileaks, and also with other platforms for receiving donations. This is why organizations and people are deciding to accept donations in bitcoin which is not censurable.

It is impossible to block or limit bitcoin operation if it is managed directly through a proprietary wallet: anyone who owns the private keys can always act freely without ever running the risk of being blocked or limited.

It is never possible for anyone to prevent others from using their own BTCs if they use a proprietary wallet with their own private keys, not even the judicial authorities or law enforcement agencies.

Of course, the transactions are public so, once you know the public address of the account, anyone can check what transactions have been made, but they cannot be blocked or restricted.

It is not unrealistic to think that in many cases similar to Tommy Robinson’s, bitcoin can be a quick and easy solution.

Opening a wallet to receive BTC in an uncensored way is very easy: you just need to download and install, for example, a wallet like Eidoo.

Once BTC is received there is no way for anyone to block the use of it, and in this way, everyone can become a full owner and sole manager of their money.

The only real inconvenience of managing your money is the current lack of mass adoption. In fact, there are not many people who use BTC to make payments or, as in these cases, donations.

Previous article Fintech on the Block is coming up, Meet fintech visionaries, participate in a pitch competition, and listen to a famous artist
Next article 5 blockchain applications for companies. Available within the next decade