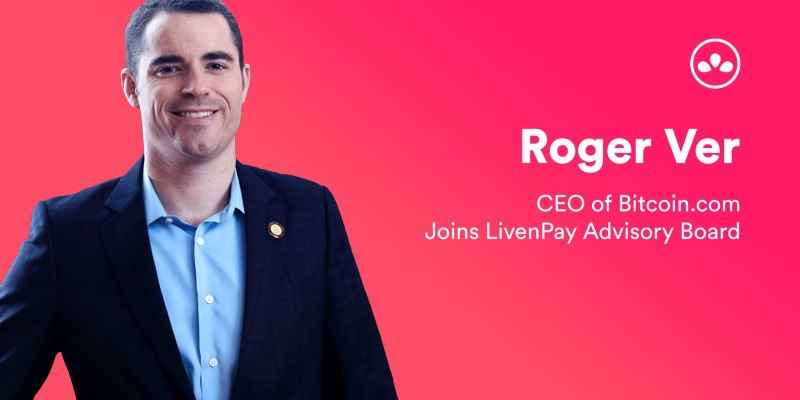 LivenPay, an Australian startup ranked among the Top 10 in the Extreme Tech Challenge, announced today that Bitcoin.com CEO Roger Ver has joined the team as an official advisor.

It's here, our biggest announcement to date!! 🎉 The team at https://t.co/tLT5qjJL9Y is incredibly excited to officially welcome @rogerkver to our advisory board! 🥳 Mass adoption of #cryptocurrency is the goal and we're only getting started 👊 https://t.co/dcdR0vZTrh

The LivenPay platform will launch its ICO phase with the public sale of its ERC20 LVN tokens on Wednesday, February 28th, 2019. And, just three days before the launch, it was able to include among its advisors one of the most popular and prominent names in the crypto space.

I'm honored to help drive mass adoption of #cryptocurrencies in Australia by teaming up with #LivenPay as an official advisor. What will their top 10 Android app with 400,000 registered users and 20,000 venues do next? Stay tuned! https://t.co/W8ljQqivzc

“I’m honored to help drive mass adoption of #cryptocurrencies in Australia by teaming up with #LivenPay as an official advisor. What will their top 10 Android app with 400,000 registered users and 20,000 venues do next?  Stay tuned!”

According to LivenPay’s official blog, Ver describes his collaboration as an advisor to the ICO:

“We are simply ecstatic that a genuine global star such as Roger Ver has joined our advisory board. Roger’s belief in us demonstrates further proof that what we are setting out to do with Liven will truly change the way the world engages in its favourite pastimes, starting with dining out and that’s just the beginning. By making it not only more exciting, but also more frequent for our users by rewarding them with a cryptocurrency that can appreciate in value as the ecosystem grows”.

In fact, LivenPay‘s goal is to bring more people to use the app, through which they can choose locations such as restaurants, cafes, bars, at the moment only in cities like Sydney and Melbourne.

Once the location has been chosen, users can then order food and pay in crypto or credit card through the app – without the need for a cashier – and finally, thanks to the use of LivenPay, the user can receive an incentive in LVN, the token of the project that on the website is defined as the universal digital currency for food.