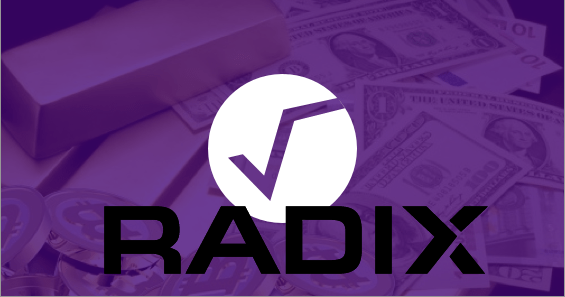 Radix attempts to replicate all Bitcoin transactions over these ten years in less than an hour. The startup describes itself as a new internet layer where data and assets can be transferred with extreme speed.

The team behind Radix says it has created an alternative to the blockchain that can solve problems of scalability and centralisation risks, using a new consensus algorithm called Tempo.

The aim is to reproduce in full all the transactions that have taken place in the ten years of Bitcoin’s life on the Radix ledger, clearly validating all of them, using a network of over 1000 nodes uniformly distributed all over the world.

There are two fundamental aspects on which this system is based:

Radix has made APIs available and its system works on any device, from TVs to smartphones. Their mission is to create a protocol that can be used by 7.5 billion people worldwide, on over 500 billion devices.

Consequently, the aim is to give everyone access to the economy of digital assets, without having to deal with technical problems, such as the classic bottleneck issue, which arises within the known networks.

Here is a comparison that shows the maximum amount of transactions per second on different platforms, according to Radix’s point of view: 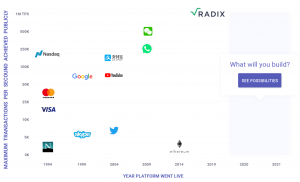 On June 12th, during the tests carried out, the startup stated that it had reached 1,089,887 TPS (transaction per second).

Several analysts, such as Willy Woo, are interested in seeing if Radix will really be able to report the exact transaction history of Bitcoin, which has more than 460 million addresses, within an hour.

The dataset used for the test

In the first real test, Bitcoin’s history has been taken into consideration for two main reasons:

The team argues that the maximum amount of transactions per second can be increased even further. It all depends on how the sharding is done. The more fragments are made available as input, the greater the throughput, clearly all within a certain limit.

For the first test, the focus was on speed rather than fault tolerance and Google Cloud was chosen as the system. The consensus mechanism is not based on a Proof of Work or Proof of Stake system, but on input sharding. The code is available on Github and anyone can test the fault tolerance factor.

Thanks to Radix, a node with 8 gb of ram and 4 cores can process about 2000 transactions per second, including the validation speech. For this particular test, it was essential to increase the ram in order to cache the Bitcoin dataset, and nodes with 30 gb of ram and 8 cores were used.

Bitcoin uses blocks. Radix does not. As a result, the dataset is not properly optimised for the Radix architecture. In the future, the team expects to obtain different datasets for further tests.

A more technical explanation of the protocol and network operation is available at this link.

Saifedean Ammous: interview with the author of The Bitcoin Standard
MetaMask: the complete guide

Payment: a survey shows that 59% of companies accept crypto in the US