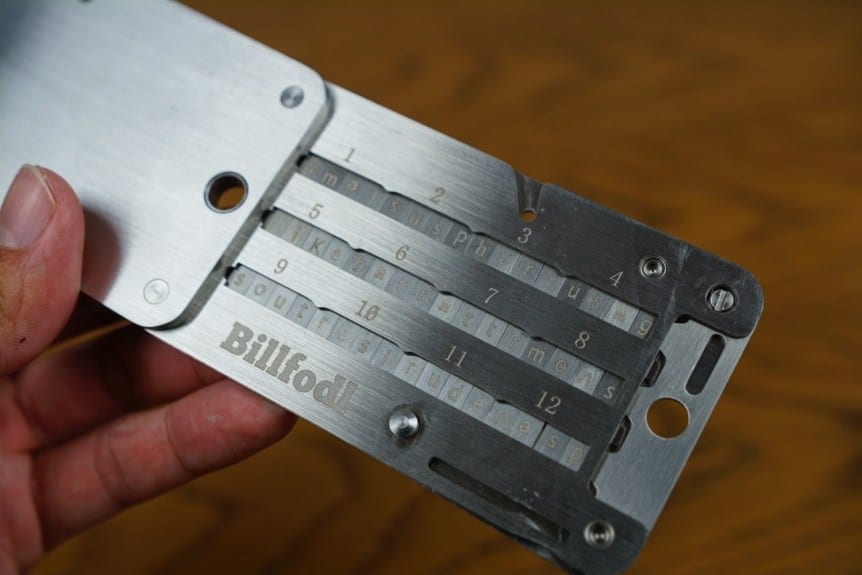 Over the years, some companies have proposed different solutions to store wallet seeds safely. One of these solutions is Billfodl, a tool made of stainless steel to store seed up to 24 words.

Obviously, it is immune to water, humidity, fire and high temperatures, as well as insects and termites.

A seed is simply a sentence of words (12, 18 or 24) without an apparent logical sense. However, this particular phrase is the only way to recover funds in the associated wallets, regardless of how many transactions have been executed and how many addresses have been generated.

This is because what may seem like a simple phrase, through a cryptographic mechanism – in more detail the concept of a hierarchical deterministic wallet – allows, using certain mathematical functions, to derive the private key, and therefore to recover all the funds associated with it.

It follows, therefore, that keeping the seed secure is not so easy. Logically, the best solution is to write it down on several sheets of paper and hide them in different safe places. But paper is not eternal. Moisture, water, fire, termites and other unforeseen events can destroy paper seeds.

Billfodl could be useful as a gadget to keep the key of a cryptocurrency wallet in a permanent way.

Billfodl: the tool for storing the seed

It is possible to buy Billfodl on the official website of the company. The price is not very economical, considering that it is about 79 dollars plus shipping, so it reaches 90 euros easily for the full product.

The device arrived quickly (less than a week) and without additional customs fees. It is possible to buy it on the official shop at the following link. It’s obviously possible to pay it in dollars and bitcoins, using also Lightning Network.

Billfodl comes with a very minimal package, containing only the seed Keeper and the tiles with all the letters and symbols. There are no user manuals, but the use is quite intuitive.

Among the other accessories supplied, there is also a gadget to be attached under the desk to hold Billfodl. Some security seals are also present.

Being fireproof, the device is made entirely of stainless steel 316, so it is also immune to corrosion. Being made of steel, the weight is by no means contained. We are talking about 250 grams for the SEED Keeper alone without any tile inserted. Adding all 96 pieces brings it closer to 300 grams.

The construction is very solid and there are no weak points. The device is really well made. The only flaw is that it tends to get scratched a little too easily. The size, at least the width and depth, are comparable to those of a credit card. But it’s obviously thicker, about 7 millimetres.

The two external sides (upper and lower) do not have any inscriptions or logos. On them, there are a series of holes and screws. In detail, the left hole also serves as a pin for the opening, while the right hole can be used to lock the opening with a padlock.

Once opened by sliding up the upper side, there are 12 slots of four characters each where the SEED will be inserted. Obviously, there is no lack of numbering and some separating lines between a word and another. At the bottom left, we also find the Billfodl logo.

On the right, there is another pin with the metal tab for fixing the tiles. To unlock it, it will be necessary to loosen the screw in the upper part and extract the metal block in the lower part, which will allow access to the three slots for the letters.

Obviously, on the other side, there are the remaining 12 missing words, for a total of 24 words of four characters each (then we’ll explain why only four characters). Finally, to permanently secure the lock, there is also a protruding pin at the bottom and its groove on the opposite side.

There are about 396 tiles present. They include all upper and lower case letters, as well as numbers and some special symbols. They are quite readable since the letters are engraved by laser.

How does Billfodl work?

At this point, all you have to do is insert the various tiles with the first four letters of each word one at a time. If a word consists of only three letters, you will need to add a white block to maintain the correct spacing.

As indicated by Billfodl, not inserting a tile could compromise the solidity of the device in case it is subjected to high temperatures. Once you have entered all the words, simply close the right tab and tighten the screw.

As mentioned before, Billfodl allows only four letters per word to be saved.

In part, it can be seen as a disadvantage, but in reality, to restore the SEED and then access the wallet it’s enough to have the first four letters of each word.

After typing the first words into the various wallet recovery tools (e.g. Electrum), the correct words will be automatically suggested and identified starting from the four characters.

Billfodl is just one of many solutions to preserve the seed. There are more expensive alternatives or even cheaper approaches. For example, the words of the seed could be engraved by hand on a steel or copper sheet. In any case, a ready-made solution like Billfodl is certainly faster and more versatile.

It is not too cheap, but for those who want maximum security in the conservation of the wallet seed, it is definitely a good tool. The only flaw is the absence of a safety lock mechanism. But a common padlock should do the job perfectly.

Previous article Google Trends: Bitcoin searches surpass Trump in the US
Next article The 5 most useful tools when trading cryptocurrencies