As reported in several tweets by CoinMetrics, in the last period the NFT (Non-Fungible Token) or ERC721 tokens based on the Ethereum (ETH) network have recorded a staggering peak. 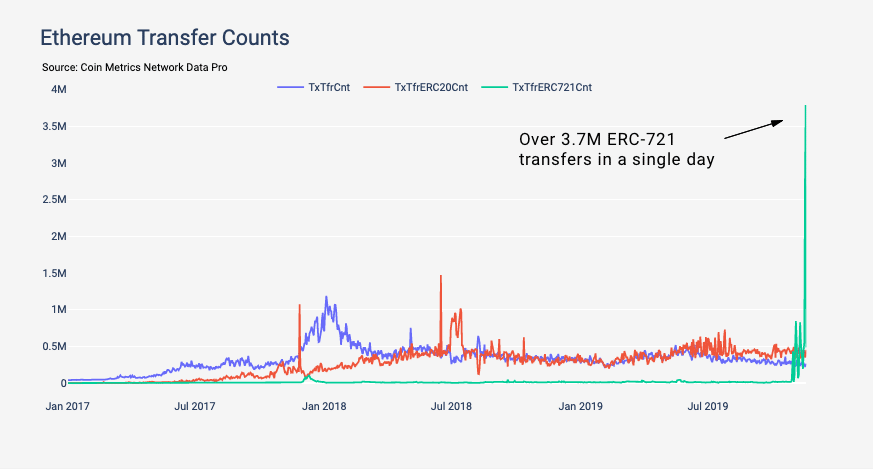 As can be seen from the chart, in November alone the peak of transactions involving NFT tokens reached almost 4 million, which is 4 times higher than the previous record of 846 thousand, at the beginning of November.

The explanation for this surge is due to Gods Unchained, a trading card game similar to Magic the Gathering, from which it takes a lot of inspiration.

In fact, in a few days from the official launch of the game, more than 6 million cards have been transferred in just 3 days. The reason why the Ethereum blockchain was not congested is probably due to technical improvements on the scalability side, especially considering that instead, a few years ago, the famous kittens of CryptoKitties had congested the network.

ERC721 numbers and the importance of gaming

Through these data it is possible to see how gaming, once again, is able to generate impressive numbers: in fact, from the sale of these digital cards, the company has made 15 million dollars and the most expensive card has reached the value of 62 thousand dollars.

Many are the blockchains that are opening up to gaming: think of Cardano with Emurgo and the collaboration with the Korea Mobile Game Association (KMGA); EOS with Chain Clash, Prospectors and Upland; not to mention the recent acquisition by the American exchange Gemini of the Winklevoss brothers of an NFT trading platform.

Also this morning, NEO Global Capital invested in a platform that facilitates the development of gaming and betting platforms, BetProtocol.

Previous article The Binance crypto exchange is coming to Australia
Next article News: another ICO scam brings US programmer behind bars