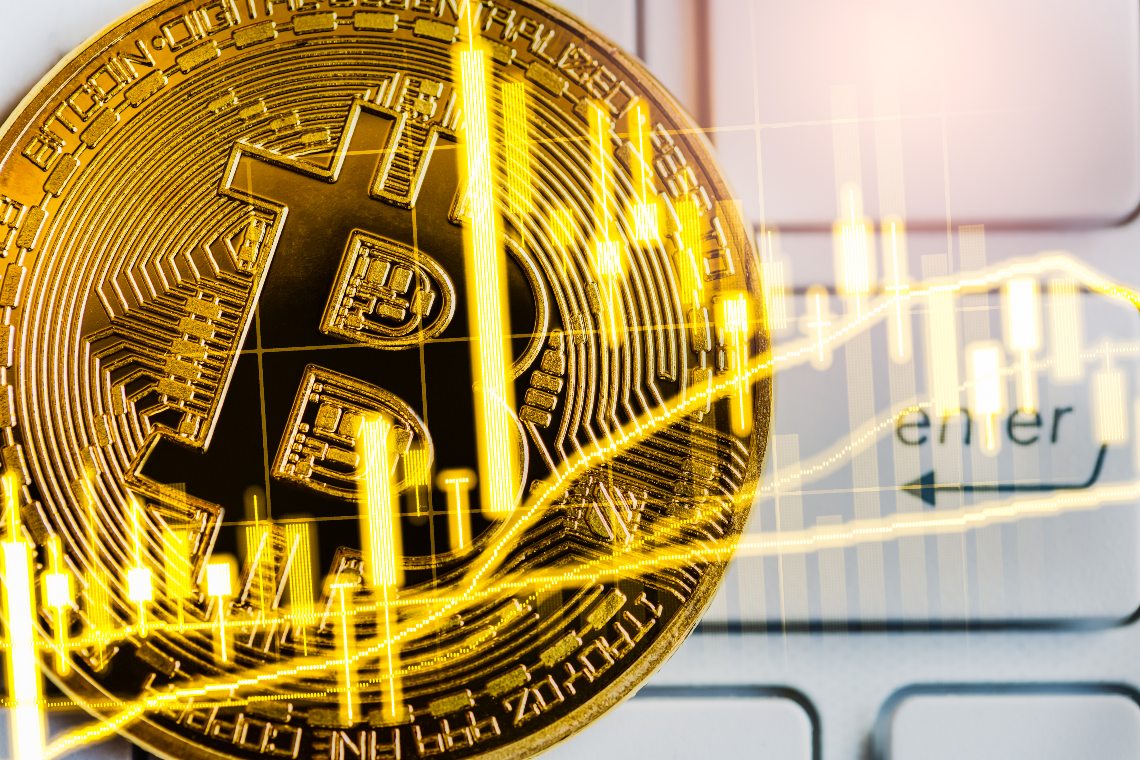 Bitcoin: volatility is back and volumes increase

From the first revival signals arrived in recent weeks from some altcoins, the majority positioned above the 20th position among the most capitalized, the last 72 hours show a return of volumes and volatility also for the first three: Bitcoin, Ethereum and Ripple.

The latter, thanks to the rises of the last few days, reconquers the podium after having ceded it to Tether for over 2 months.

The hottest month of the year has awakened the dormant spirits that from the end of May to the last days of July have been characterized by the narrow oscillations, sometimes even microscopic, of Bitcoin and the main altcoins, causing the daily volatility on a monthly and bi-monthly basis to collapse to the lowest levels of recent years.

The volatility surge on Sunday morning, with price fluctuations that in a few minutes saw prices dance between negative and positive double-digit signs, awakens the exchanges with peaks in volume that had not been recorded since last May.

With the slowdown in the rallies that characterized the last weekend, the first signs of consolidation began to appear.

Overall, even today there is the prevalence of positive signs: out of the first 25 capitalized only Crypto.com (CRO) with -2.5% and Zcash (ZEC) with -1% are down.

The market cap remains over 345 billion dollars, the highest level in the last 12 months.

The dominance of Bitcoin is down, at 60%, the lowest level since June 2019, while the altcoins regain the levels of capitalization (>$136 billion) at the end of June 2019, with Ethereum at a step from 13% dominance, as was the case in September 2018.

Ripple also pulls its head out of the swamps in recent months, regaining 4%, a level abandoned last mid-April.

The Midas Touch Gold (TMTG) token, with a rally of more than 35%, conquers the podium of the best rises of the last 24 hours, followed by MCO also today uphill by more than 30% who continues to benefit from the union with the token of the Crypto.com (CRO) project, leaving behind REN and Chainlink (LINK), both achieving a +15%.

On the other side, today’s worst is Ampleforth (AMPL), which is down by more than 15% and is still under speculative attack in sharp contrast to the market trend (from the tops of July 12th its value has lost more than 70%).

At a distance Celsius (CEL) -7% and Aave (LEND) which, despite today’s declines (-4.5%), continues to show that it wants to consolidate the increases of the last two months with prices close to the highs of the last two years recorded last mid-July. 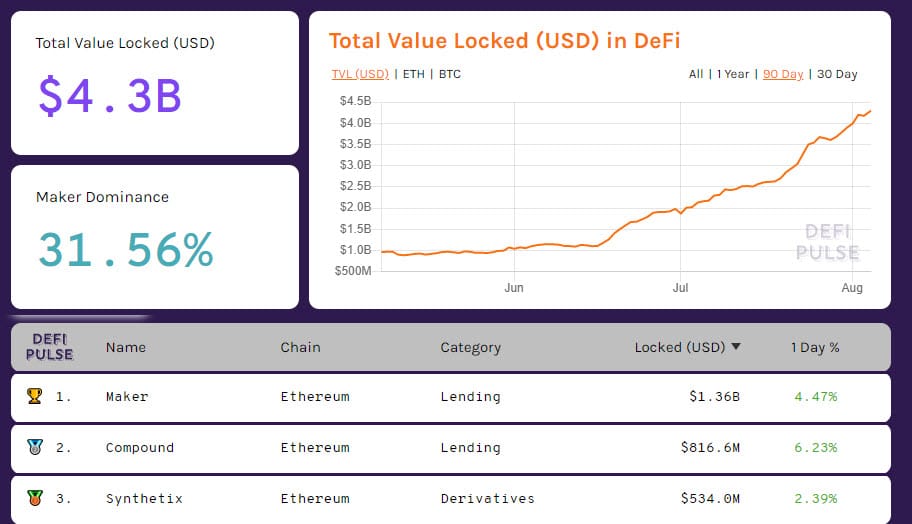 The projects of the DeFi ecosystem continue to attract capital, setting a new record with more than $4.3 billion in total locked value.

Remarkable the contribution of Ethereum as the main collateral, which yesterday set a record of more than 4.3 million ETH locked in dApps. The leadership remains with Maker with over 30% market share, followed by Compound and Synthetix.

The latter in the last few hours tries to break away from Aave in the head-to-head for the third step on the podium.

Soothed the euphoria of the weekend that has seen Bitcoin prices with the dollar exchange rate rise above $12,000, a level abandoned exactly in August 2019, in the 48 hours the fluctuations are drawn to around $11,000.

These are the levels that since yesterday recorded a high exchange of derivatives in Call options to protect further upward extensions. After several days of the clear predominance of Put options, since yesterday the volume of Call options exceeds that of open Put positions.

This leads to considering possible price retracements in the coming days. The alarm would be lifted with prices above $12,500. 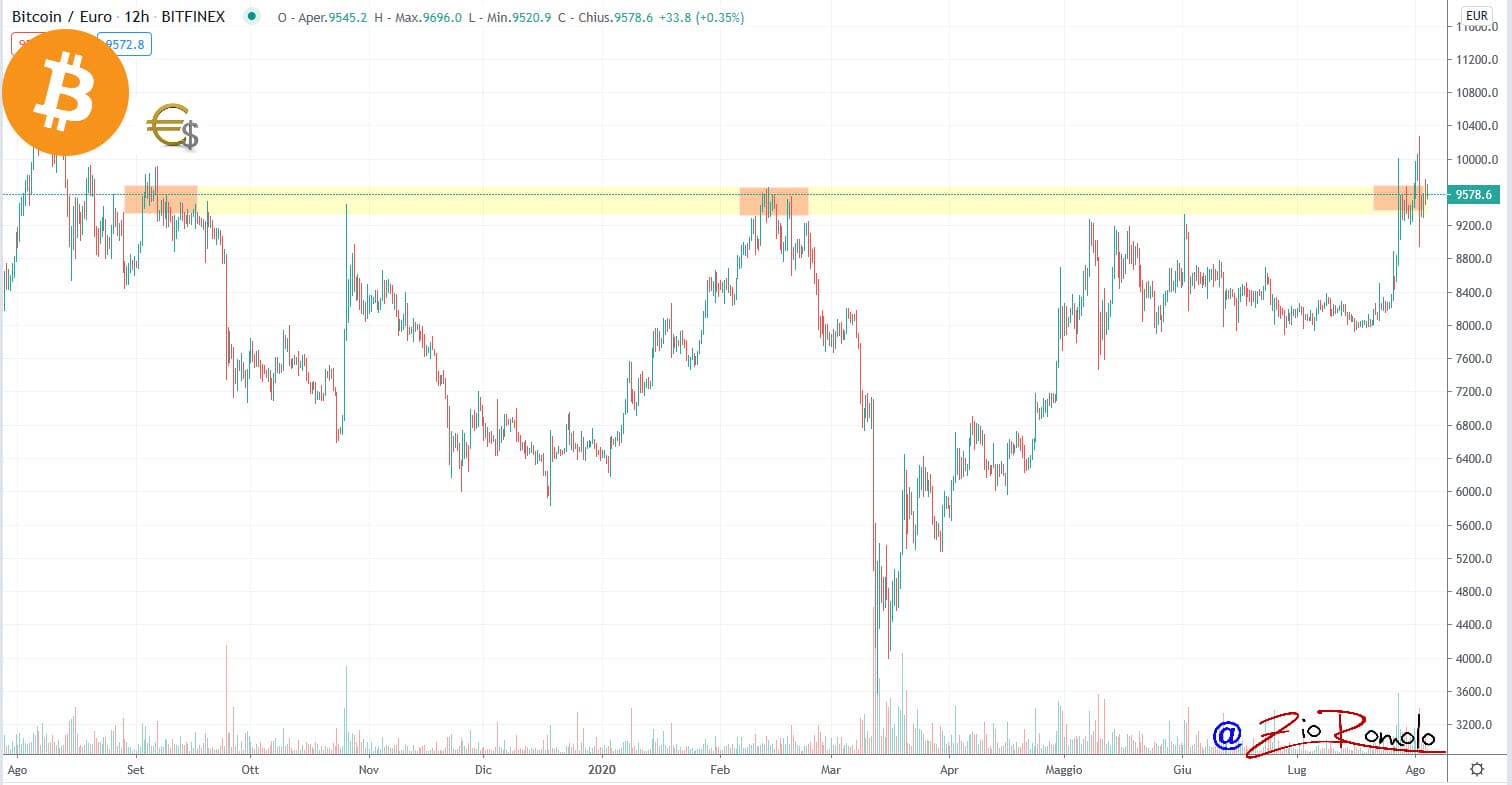 If the breach attempt that occurred twice during the last week, were to confirm the profit-taking in the medium term, it could open spaces to retest first the 8,800 and then the 8,000 euros.

The queen of the altcoins is proving to be holding her prices steady. After Sunday’s high of over $410, the highest level in the last two years, prices are attempting to consolidate the $390 holding.

The rally, which from mid-July levels has risen by about 80%, seems to have come to a pause for reflection necessary to assess the health of the latest rises.

In these hours, the professional operators are again rebuilding the defence barriers upwards, placing the first resistance between 410 and 430 dollars, while downwards there are still dangers without any defence until 230 dollars. In these moments it is essential to remain vigilant.