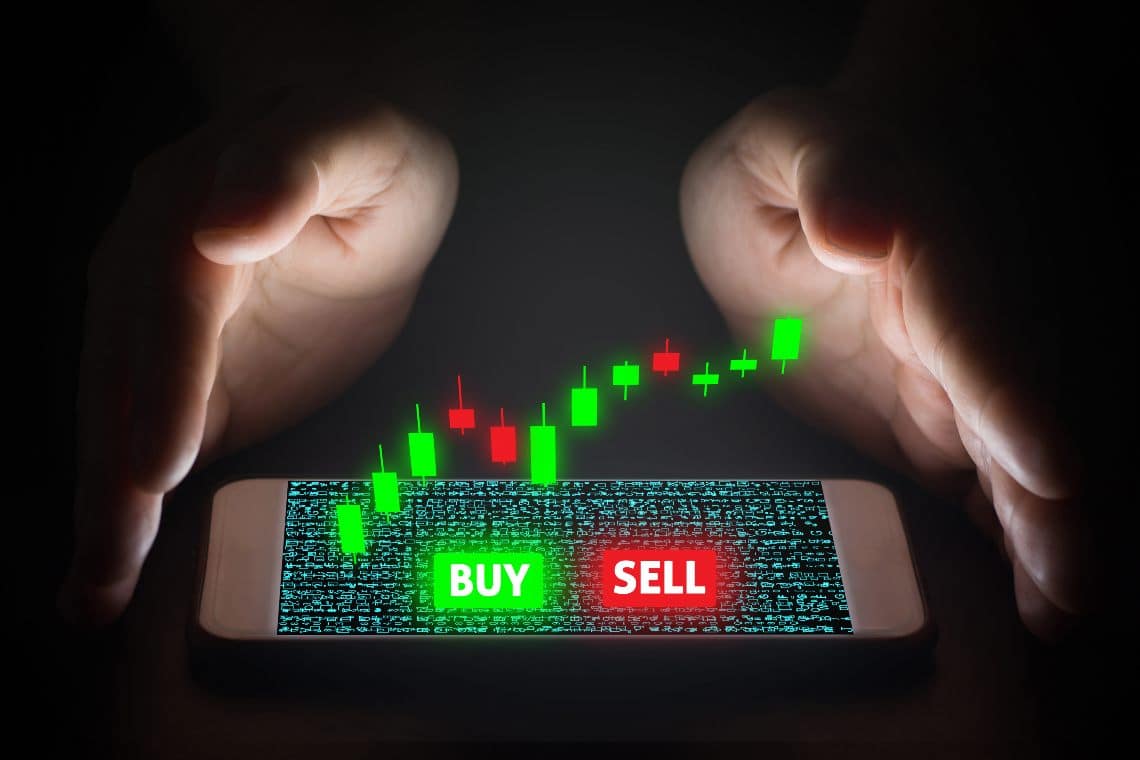 Aave, price record: it is first in DeFi

The second day of this last week of August begins with weakness. Among the best of the day, Aave (LEND) makes its way with a price that makes a further leap of 30%, touching $0.80. This is a new historical record that makes the performance rise over 5700% from the lows of mid-March. 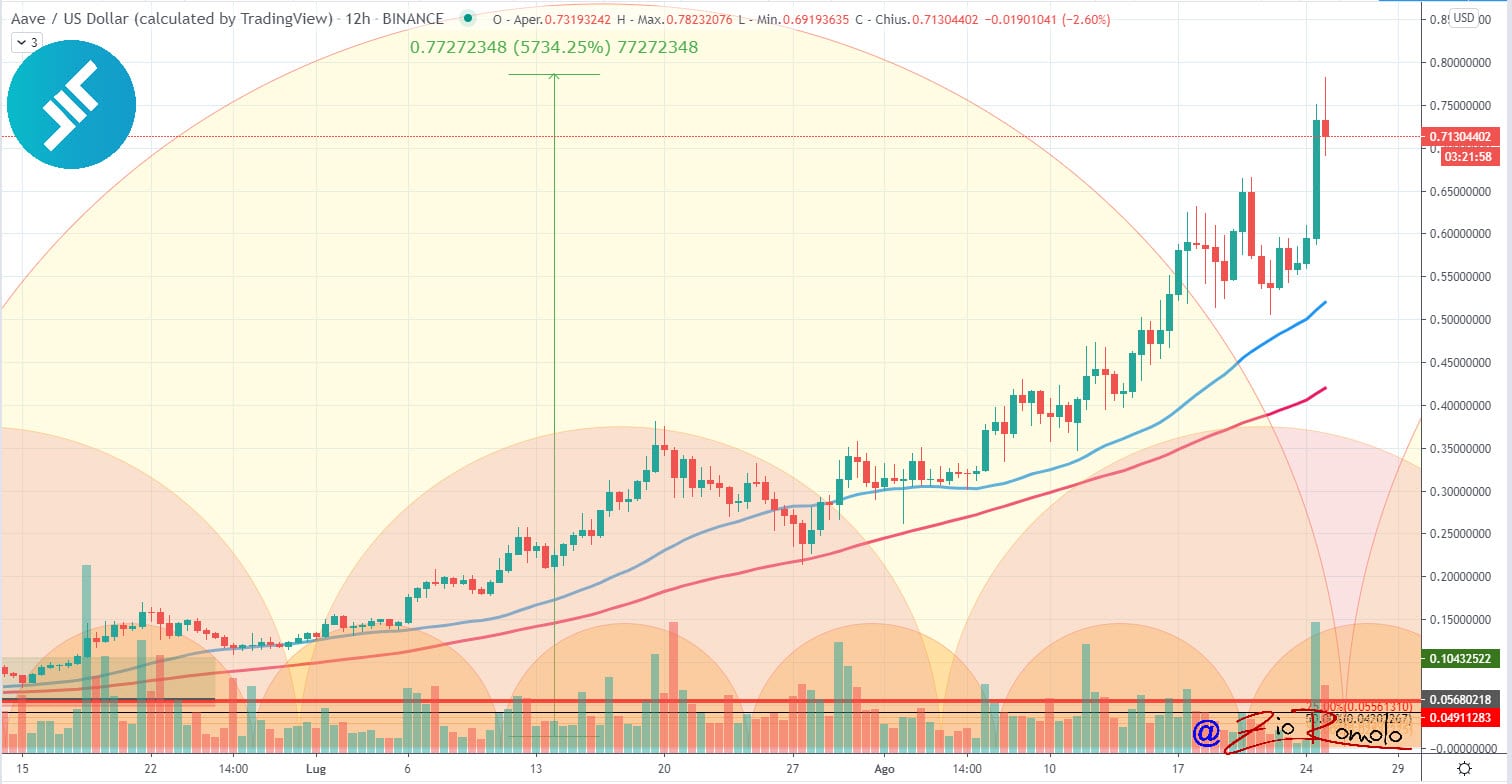 August is a month that is proving to be better than expected. Statistically, the third quarter of the year has been more sensitive to bear raids. Except for the summer of 2017 with a performance of more than 80% for Bitcoin, the other years have recorded double-digit negative balances or a minor 2% gain in 2018.

In any case, today, with a clear predominance of red signs, more than 70% of the cryptocurrencies are below par.

Aave superstar, price on the rise and record in DeFi

Aave is enjoying a sparkling period, not only for its price. The protocol also celebrated the first place in the DeFi Pulse ranking for the highest value of locked assets in the dApp.

With more than $1.46 billion, Aave takes the top position by undermining Maker with a difference of more than $200 million. A day that sees a total of $7 billion for the total collateral locked in decentralized projects. 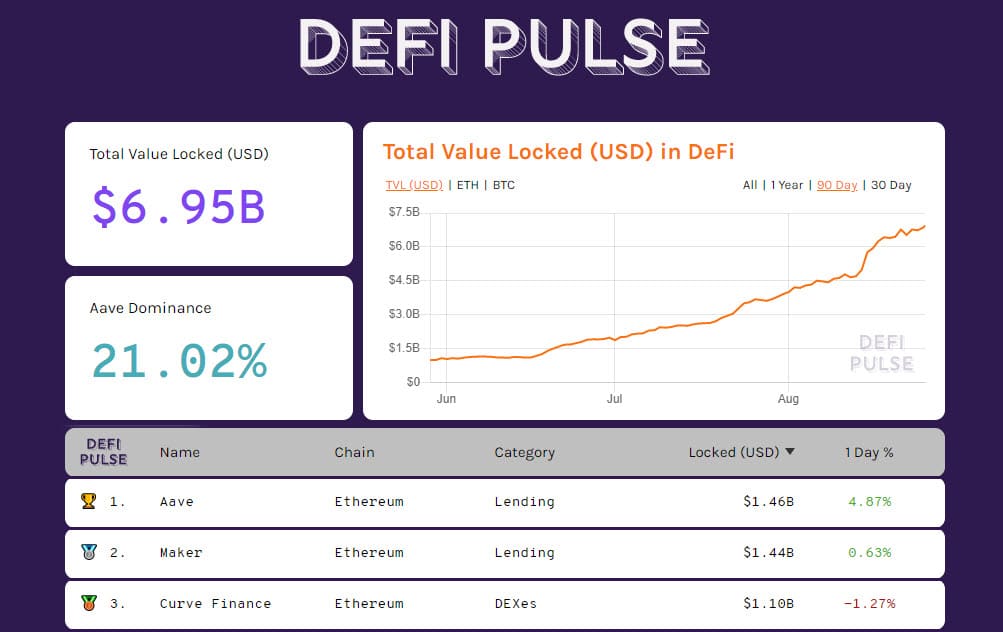 Among the tokens of decentralized finance, there are the rises of Yearn.Finance (YFI) and Synthetix Network (SNX) up more than 6% from yesterday morning’s levels.

Total capitalization remains above $365 billion with volumes down from last week’s highs but at levels ($120 billion) above last month’s average.

Dominance remains unchanged from the levels of recent days with Bitcoin above 59%, Ethereum at 12.3% and Ripple at 3.5%.

The reaction to the rebound that yesterday saw prices attempt to return above $11,900 is weakened.

In these hours, the support built on Sunday in the area 11,500 dollars is being tested again. If the descent were to continue, it is necessary not to go beyond 11,400 dollars, a level that would open the doors to review the supports between 10,800 and 11,200 dollars, where the covers of the Put options opened by professional operators have grown. The $12,200 wall remains fixed on the rise.

After a brief return above $400, for a few hours, prices plunge back below this psychological level, going to test the former resistance of early August, now become medium-term support.

These are the crucial levels to understand whether the consolidation intentions have matured or whether it is necessary to go even lower. The first protections of derivatives operators remain between $355 and $325, so these are the levels to monitor in case of further slippages. A further extension would increase speculation and the danger of extensions in the $300-310 area.

In these phases, it is better to wait for confirmations of the strength of the supports to understand if the weakness phase has come to an end and to return to evaluate the breaking of the recent highs.