Arbitly, the story of an almost perfect scam

Arbitly seems to be the latest crypto platform to have fooled numerous users. A perfect scam, or almost perfect

The site presented itself as a cryptocurrency arbitrage platform. On the surface, it looked perfect and complete, leaving no room for doubt about its functionality. But something went wrong.

As of January 4th, the platform stopped withdrawals (but not deposits and registrations!). From January 11th, the website went offline. Apparently, it was supposed to do an update to include new cryptocurrencies. But then the website became unreachable. It was assumed to be a hacker attack.

Suddenly, all the social channels disappeared: Facebook, Twitter, Telegram, Medium and YouTube. Basically, Arbitly left no trace of itself. In the beginning, the support channels were actually still functioning and were responding to users. Since January 10th, however, the site’s support bot, if I contacted it, gave the following message:

“Man there is no news. Arbitrarily scammed. They ran away. It’s gone. Finished. No one is here”.

Yet the platform seemed to be very well made. Many users told of their positive experience, investing money, taking advantage of the Bitcoin or Ethereum hype, and then managing to withdraw their funds. But others were duped and are currently unable to withdraw their money.

How Arbitly worked and why it is the perfect scam

Arbitly started out as a cryptocurrency arbitrage trading platform. It allowed users to link multiple exchanges together and do arbitrage by investing an amount, and also guaranteeing returns. The site also had at least a couple of pro plans. It even had a “welcome gift” of a free week’s trial of the pro plans.

Arbitly can be considered a well thought out scam. The platform had not only social channels and support numbers, but also a team with faces and LinkedIn profiles.

However, the first suspicions were aroused by the change of CEO announced on December 24th. Alexander Black, founder of the company, was replaced by Marco Fanger. 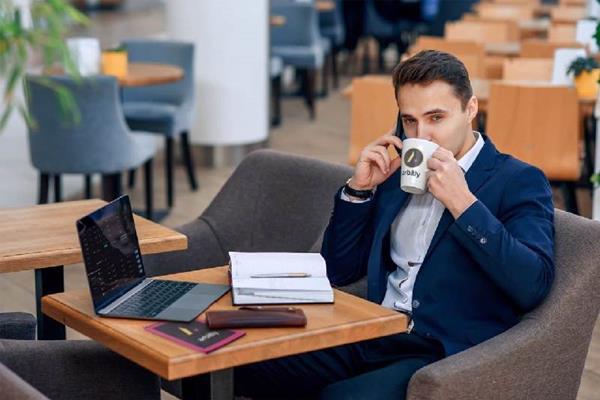 The photo attached to the press release shows him drinking from an Arbitly branded cup. It turned out too late that Marco Fanger does not exist. Or rather, he is an actor. An actor who, by the way, shortly before the website went offline, had made a video to reassure users. An update, but obviously it wasn’t.

Among other things, comparing the man in the photo associated with the statement with the interpreter of the video, they look like two different people.

In addition, his image appeared on another site of crypto arbitrage: aramco-trading, perfectly equal to Arbitly, but which has nothing to do with Saudi Aramco.

Sure, Arbitly was supposedly a platform where, according to reviews, it was possible to make big profits. But reading the chats of those who were scammed, it emerges that the money passed through wallets owned by the platform. And this must have been an early warning sign. Then there were the referral earnings, which must have raised doubts about a pyramid scheme. And indeed, many promoted Arbitly, with their referral links.

The other alarm bell should have come from reading the newspapers. Coindesk, for example, reported that the Maltese authorities had made it known that Arbitly, although based in Malta, had never obtained a licence. Arbitly replied that its Malta office was a ‘virtual’ office and that it was in any case committed to complying with the laws in force.

Another warning sign: the website promised a zero-risk investment strategy. But those who trade know that risk is part of this world, it can be circumscribed but not zeroed out.

The story of Arbitly ends with someone running away with the money, while thousands of users have lost funds, even tens of thousands of euros. Many of them are organizing themselves to take legal action. The hope is that the perpetrators of this scam have left a trail. They may have used centralized exchanges, which make it easy to identify the account holders.

Previous article Bitcoin Went Up Over 300% in 2020!
Next article Hawaii and Bitcoin, searches on Google Trends