QuadrigaCX is down: news on the problems of the Canadian exchange

In recent days, QuadrigaCX, Canada’s largest exchange, has been down for several hours and, in recent months, customers have encountered significant problems when withdrawing both crypto and fiat.

Then on January 28th, the exchange published a statement explaining that QuadrigaCX was upgrading.

Meanwhile, the Canadian Imperial Bank of Commerce (CIBC) had frozen about $21.6 million as a result of a conflict over the determination of certain exchange accounts. In addition, the death of CEO Gerald Cotten on December 9th, did not make things any easier.

Subsequently, the upgrade message was replaced by the following message, which explained that QuadrigaCX was down.

Unfortunately, the surprises did not end there for the exchange and, on January 31st, the platform was blocked by a CCAA issued by the Supreme Court of Nova Scotia in order to allow the exchange to solve the financial problems that plagued QuadrigaCX. 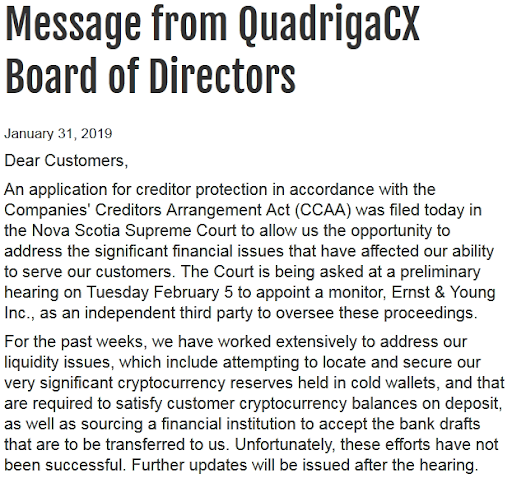 In other words, the QuadrigaCX team can’t find the access data of the cold storage wallets where all the information and the various cryptocurrencies of the customers are stored.

For this reason, the exchange relied on the Supreme Court of Nova Scotia, which, after researching the case, drew up an official document including Jennifer Robertson, the widow of the founder of the exchange.

Everything should be clarified on February 5th, when other external parties will verify the transactions and try to recover access to data. For customers, however, the problems have just begun since, as a last resort, the same platform will be sold to try to refund the largest number of customers.

The latest news on QuadrigaCX

A few hours ago, the analyses of the various wallets of the exchange were concluded in order to determine whether they had actually lost access. After careful analysis, it was found that the exchange was using deposits to pay other users requesting withdraw.

This would mean that the exchange did not lose access to the bitcoin deposits and that the estimate of the total BTCs would be lower than in the previous document. In addition, this means that the delays in withdrawals were caused by the lack of funds from the exchange, which used other users’ deposits instead.

Some of the addresses linked to the exchange have been recovered:

From these data, it was discovered that the exchange has transferred about 3 BTCs, a movement that contradicts the claim of loss of access to funds.

The next step for exchange users and QuadrigaCX itself is to wait for tomorrow’s (February 5th) Court’s ruling.