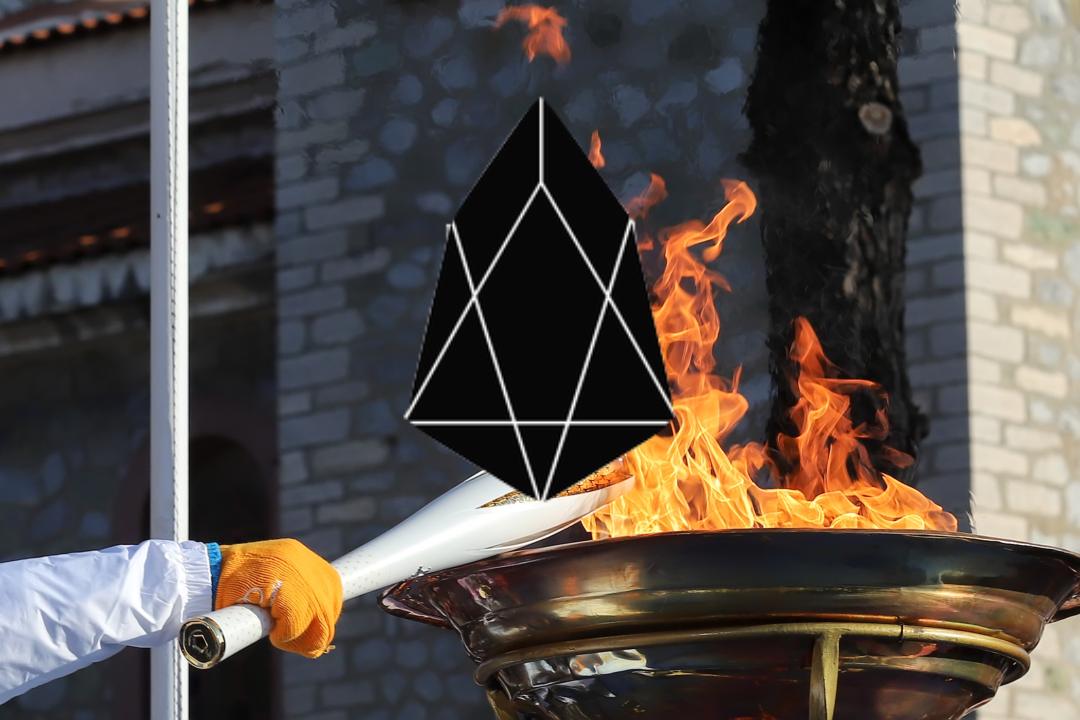 Following the success of the Lightning Torch, the EOS community has also created their own EOS Torch initiative and, after just 66 passes, Brock Pierce has now accepted the EOS Torch, leaving everybody hopeful of being chosen next.

Welcome to the #EOSTORCH project. The EOS community has minted non-divisible 1 TORCH token which is being passed from account to account

Join the chat in the telegram channel https://t.co/IZqca4mhYf

The initiative was started on March 2nd by two Telegram users RUDEMUDCRAB and Dan Watts. The torch is a non-fungible token (NFT) called Torch that cannot be split and that is passed from one EOS account to another without ever changing the value and without anyone having to add anything to send it.

This is precisely the substantial difference with the Lightning Torch which, at some point, has been named “LN Trust Chain” because each participant must add 10,000 satoshis (about $0.34) to the previous payment for it to be sent to the next bitcoin address.

It takes, therefore, a certain level of confidence that the person to whom you send the torch will continue to send it instead of keeping the payment for themselves.

The total amount is not currently a high enough bounty to justify taking possession of the funds, but the interruption of such an initiative has already taken place for ideological purposes.

“I’ll seize it because I can, and no one can stop me. This is bitcoin,” wrote edward_btc, who rebelled against the involvement of the trust factor. Bitcoin, in fact, should be “trustless”, he explained.

The LN Trust Chain will not be passed indefinitely as there is a size limit written in the code set at 4,390,000 satoshis, or about $150. Once the threshold is reached, the funds will probably be donated to Bitcoin Venezuela, a non-profit association dedicated to raising awareness of the cryptocurrency.

Since its conception on January 19th, the Lightning Torch has been passed (with interruptions) 233 times and has included personalities from the bitcoin world such as Pierre Richard, Anthony Pompliano, Andreas Antonopoulos, Giacomo Zucco, Erik Voorhees, Justin Sun and Jack Dorsey.

In just 5 days, the EOS Torch has already been passed 66 times and has included block producers such as NodeOne, EOS Cannon, EOS Nation, EOS New York, Cypherglass and EOS42 as well as personalities behind the projects such as pixEOS, Meet.One wallet or TokenPocket.

The journey of the EOS Torch can be easily followed on any EOS block explorer while that of the LN is tracked by Twitter users. 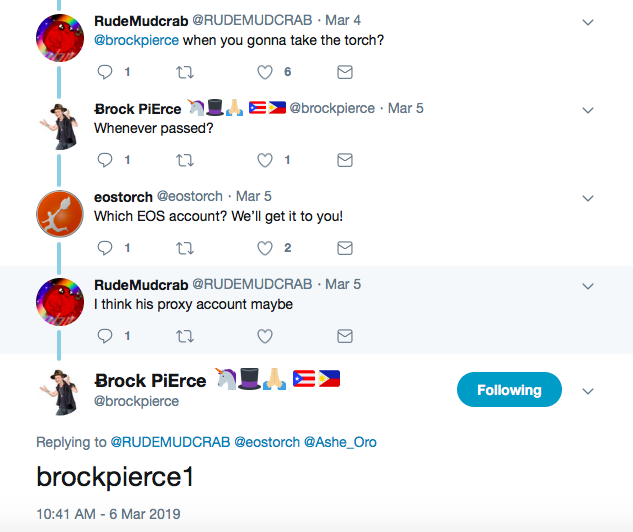 Community involvement is also different because bitcoin users tend to use Twitter, while EOS users use Telegram, although it has to be said that Brock Pierce has also started promoting the initiative on Twitter, replying to messages and making himself available.

The President of the Bitcoin Foundation and co-founder of EOS Alliance, Block.one, Blockchain Capital, Tether and Mastercoin (the first ICO in history) also said that he will hand over the torch to Brendan Blumer or Daniel Larimer.

All good. I’ll be sending it to Brendan or Dan once it hits me.

And there is also a memo with the geographical coordinates:

The creator of the EOS Torch idea said:

“It’s simply a fun idea to unite the community instead of constantly fighting the FUD. The LN network is sending monetary value across borders. This token has no value and is also faster and cheaper”.

The lack of monetary value of the TORCH token means that there is no reason to “run away” with the token.

How to get the EOS Torch?

To pass the EOS Torch to another account you need to know its name. The owner of the NFT token usually asks the other user the name of their EOS account and sends the TORCH token.

Some have also expressed criticism about the EOS Torch calling it an imitation of what was started by the bitcoin community, but while LN is only capable of cryptocurrency transfers, the TORCH token is an NFT that will play an important role in the EOS ecosystem as it will be used mainly in the creation of digital objects for the virtual reality world.