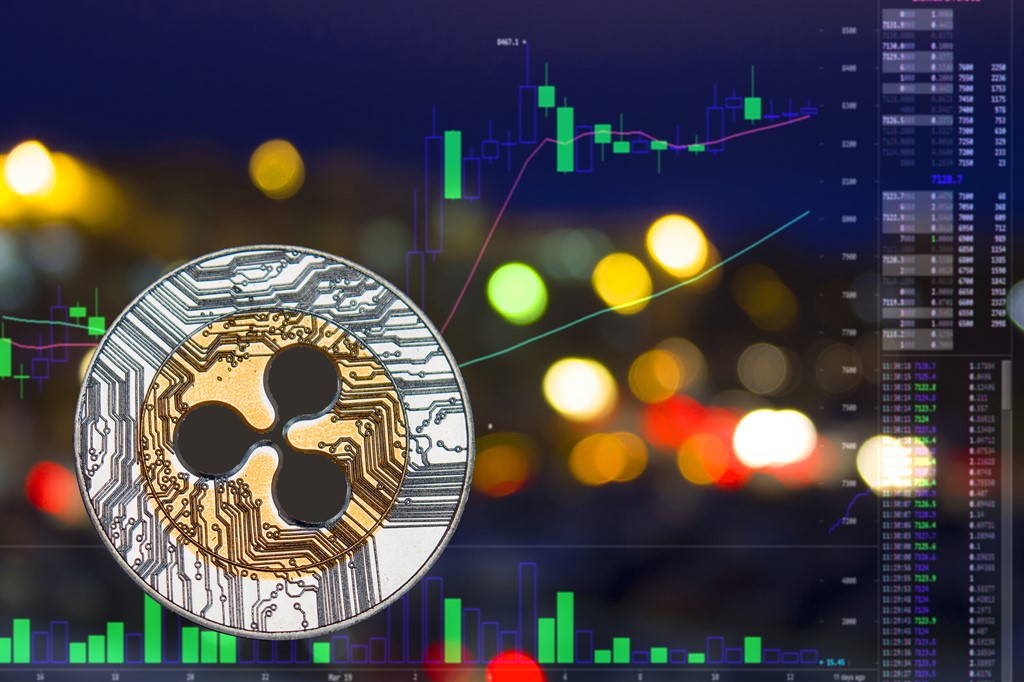 Unlike the past few days, in which the analysis had seen bitcoin stand out with double-digit increases, today the scene is taken by Ethereum and Ripple (XRP), the second and third crypto amongst the most capitalised, which are scoring price increases of over 10%.

The most important conference on the world of crypto and blockchain technology that has been taking place in New York since 2015 has statistically always featured rising prices, as well as major rallies. This year the trend is confirmed with a bullish day.

Today Ripple is among the best in the top 20, with a rise in the price that, added to that scored in recent days, returns again over 44 cents of a dollar, levels abandoned last December.

With this movement, Ripple brings the price out of the congestion that for over 5 months had compressed prices within a 5 cents range. This performance is accompanied by the explosion of the price, which in less than 5 days has achieved an overall increase of more than 50%.

The majority of the entire sector is also performing well, as more than 80% of cryptocurrencies are in positive territory. The sustained rise of bitcoin is slowing down, after having reached yesterday’s highs of $8,200, it is now seeing most investors taking additional profits. Today BTC moves below parity and with a slight decline that stops at 1.5%. Prices returning to test the 7900 8,000 dollars.

Binance has enabled deposits and withdrawals, which is reflected in the rise of Binance Coin. The reopening of the exchange pushed prices just over 28 dollars, updating the previous historical highs. BNB updates its absolute records and from the lows of mid-December marks a +575%, the price has multiplied six times.

The altcoins should not be underestimated, especially with important elevations such as those of Cardano (ADA), Stellar (XLM), Tron (TRX), or Iota (MIOTA) and Ethereum Classic (ETC) rising by 10%. This is the result of a number of factors that indicate how the altcoins in the last 24 hours have been capturing the scene.

The market cap reaches 245 billion dollars, levels not seen since August 2018. This confirms that the downward trend that characterised 2018 and the beginning of 2019 is behind us.

The return of the strength of the altcoins is to the disadvantage of bitcoin, which falls just below the threshold of 58% dominance after having scored a few decimal places above 60% yesterday. Both Ethereum and Ripple recover market share. ETH is close to 10% while Ripple at 7.4%, level abandoned in early May.

The bitcoin movement continues to set new highs over the last 10 months, going to test last week’s historical resistance between $8,200 and $8,500. This will be the next level to overcome, but price consolidation would also be desirable in order to find the strength for new purchases. After the 10-day vertical climb, it is preferable that in the next few hours and days prices slow down to form a solid foundation.

Only sinking under the first supports at 6,800 and then at 6300-6200 points could make some scepticism return to the bullish structure that is still definitely set to rise. It would take an extraordinary event and a collapse of more than 35-40% to change the current bullish structure.

Ethereum yesterday went on to test the 235 dollars, a level that had not been recorded since the end of September and that confirms the decidedly bullish structure.  ETH until last week had given some signal of sustenance with respect to the trend that was forming on bitcoin. This only brings positivity to Ethereum’s sympathisers and investors, who cast out any worries of what might be a descent under the support of $155.

After a period of uncertainty that lasted more than a month, the rise in the last five days confirms the upward trend of the current six-month cycle, which began with the lows of mid-December.

The next bullish step is between 240 and 255 dollars, while the downward bullish movement of the last 5 days does not leave any particular indications of support and therefore remains a medium-term reference support of the 180-185 dollars area, levels of resistance that between early April and early May had rejected the previous attack of the bulls.