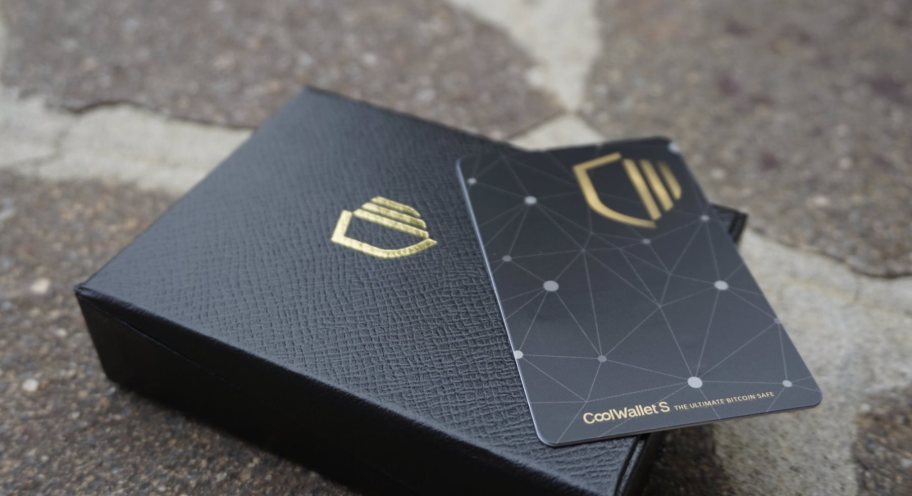 There are many hardware wallets. Among the most famous there is certainly the Ledger Nano S, followed by the new Ledger Nano X and Trezor Model T, as well as KeepKey.

However, besides the most famous brands, there are also some emerging startups or less renowned brands that can offer interesting products. That’s why in today’s review we’re going to test the CoolWallet S.

It is a device produced by CoolBit X, a company founded in 2016. It’s a different device from the hardware wallets seen until now.

In fact, it is defined as being the first real mobile hardware wallet, because in addition to interfacing with smartphones using Bluetooth, it is a small device that can be carried around at all times.

It can be safely placed in your wallet or credit card holder, as it has a compact form factor. The user interfaces via Bluetooth Low Energy 4.1 through the mobile application and a small e-ink display on the device.

CoolWallet S 2018 is currently sold at a price of $99, to which should be added the cost of shipping from China. In total, therefore, the cost for the device is close to 110-120 euros. It can be purchased on the official website.

This is much more than the classic Ledger Nano S, but in line with Ledger Nano X, available for about 120 euros.

CoolWallet S comes in a black box, elegant and well finished. Inside there is the device, a USB-microUSB cable, the charging cradle, a sticker and a sheet to write down the SEED. 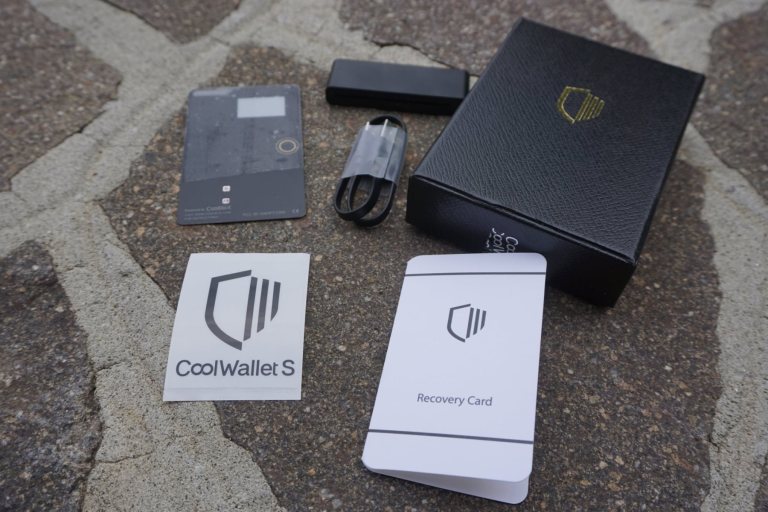 Unfortunately, there are no user manuals, but there is a step-by-step guide on the website or in the mobile application. The applications are easily available on the Play Store of Android devices or on the Apple Store of iOS smartphones.

Moving on to the build, the device is entirely made of flexible plastic. Flexible, so to speak, since it is possible to slightly bend the CoolWallet S without any problem, but obviously it cannot be folded like a sheet of paper.

It has the typical flexibility of credit cards. The plastic used is smooth and opaque, thanks to the oleophobic coating that minimises the retention of fingerprints.

It’s amazing how the company has managed to incorporate a battery, a display, a button, a Bluetooth Low Energy 4.1 antenna and much more into a credit card. Obviously, the connection to the smartphone is made using the BLE 4.1 standard. Therefore, older devices (prior to 2015) may not support this standard. 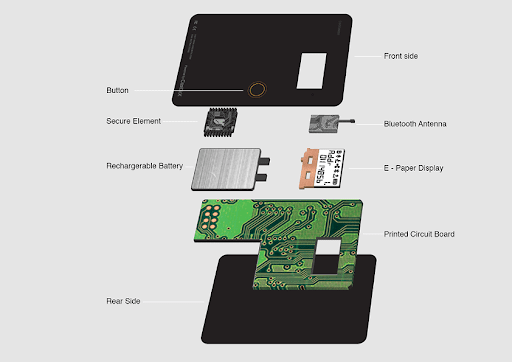 On the safety side, the BLE has a very limited range. We are talking about a few metres due to the Low Power nature, but it offers by default an AES 256 encryption on the payload of the transmitted packets. According to CoolBitX, an additional layer of encryption is applied from the mobile application. It is, therefore, a secure connection.

In terms of build quality, there are no possible weak points or detaching parts on the body, not even on the display or on the charging pins, which are made using the two metal pins on the lower front.

The integrated battery has a capacity of 15 mAh and should guarantee at least 5 consecutive days of standby, or about 20 days in case of sporadic use for simple daily operations. Like many other BLE devices, autonomy depends on usage.

On the front of the device, there is the serial number and, on the right, a small E-ink screen that is not backlit but that you can easily see under the sunlight, considering the type of panel.

This is not an LCD/OLED screen like that of Ledger, KeepKey or Trezor, which allows viewing anything. The segmented characters are already pre-printed, as are the various symbols of the coins, Bluetooth and battery.

The use of this type of display is the sore point of the wallet, as it is somewhat difficult to recognise certain letters related to the addresses. Also, it is unfortunately not possible to view other coins apart from those already shown.

Just below it, there is the only button on the hardware wallet that will be used for both turning on and interacting with the device. Finally, at the bottom left there are the pins for recharging and some information about CoolBitX, the manufacturer.

On the back side, instead, there is a graphic representation that recalls very much a topology of a distributed mesh network, typical of the networks of the main cryptocurrencies.

At the top, on the right, there is the logo of CoolWallet S, while at the bottom we find the name of the device. The device, having no openings or connectors, is resistant to dust, falls and even water. Definitely great news for a product to carry around at all times, which therefore risks falling, getting wet or whatnot.

The CoolWallet S also comes with a charging device. This is a simple stand where the wallet is inserted. On it there is the microUSB port to which the cable will be connected in order to charge through the USB port of the PC.

The cable is a bit short, about 25 centimetres, but enough for the job to be done. Once the “card” is inserted, recharging will be completed in less than two hours.

Afterwards, the CoolWallet S will be ready to be used. Just for a comparison on the form factor, this is a completely different device from the Ledger Nano S, whose shape and size are comparable to those of a classic USB stick.

Pairing and initialization of the CoolWallet S

Once the application has been downloaded on the smartphone, which can be easily found in the Play Store of Android devices or in the Apple Store of iOS smartphones, it is necessary to first activate Bluetooth on the phone and insert the CoolWallet S into the charging stand. At this point, turn it on by pressing and holding on the only button present for a couple of seconds.

Open the application, which by default will search for BLE devices nearby. Select your CoolWallet S from the available ones according to the serial number shown and press the button on the card to display the PIN and then proceed with the pairing.

At this point you have to initialise the device, i.e. create a backup SEED. CoolWallet S offers two methods of creating your own private key.

The first, safer but also more complicated, as it is not mnemonic, involves the creation of twelve, eighteen or twenty-four numerical strings that you will have to write down. At the end of the transcription of the numbers generated directly by the wallet, which can be read from the display, it is necessary to make the arithmetic sum of all the numbers and insert the final result in the verification tool in the mobile application. Nothing complicated but not very straightforward.

The second method, however, involves the classic creation of a SEED BIP39 of 12, 18 or 24 words through the mobile application. Here, as well, after transcribing the words, a verification must be carried out, inserting the words in the same order in which they were generated.

Once this procedure of creation and transcription of the SEED has been completed, which is common to all wallets, whether hardware or software, it will be possible to access the wallet itself.

A dashboard will appear at first, with all the coins supported and the total balance of the wallet, also shown in dollars. Other settings include the possibility of being able to protect the execution of operations with a fingerprint. 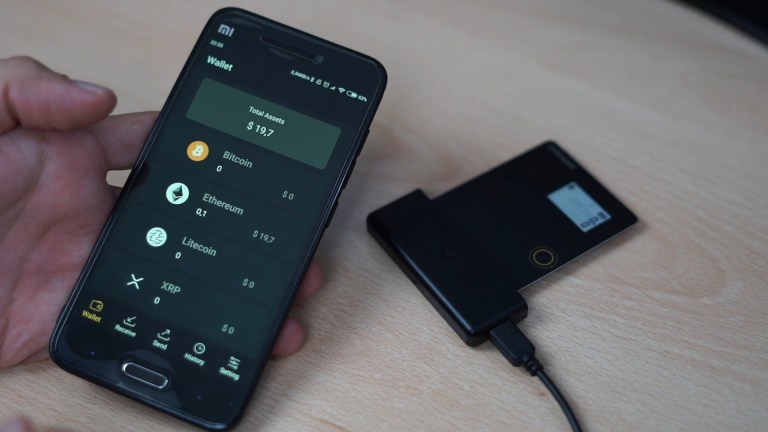 CoolWallet S currently fully supports Bitcoin, Ethereum, Ripple and Litecoin, whose balances can also be viewed directly from the wallet display. In addition, Bitcoin Cash, Tether, Binance Coin and all native ERC20 tokens are also available. The latter, however, are not viewable on the wallet but on through the app on the smartphone.

There is also an entry for firmware updates, pairing of other devices, reset and the possibility of displaying the addresses in full on the device. Unfortunately, some features of the Trezor and Ledger are missing, such as the 2FA and the Password Manager. However, these are features that could be added simply with a new firmware.

Unlike the Ledger Nano S, there is no need to install additional applications to support coins. It’s all pre-installed in the firmware.

To receive crypto, it is necessary to access the application, activate Bluetooth and turn on the wallet. Move to the “Receive” section to create an address. By default, the screen will open on Bitcoin, but in the upper right corner, there is the button to change currency.

Once the address has been created, the deposit can be made. The balance on the card display will also be updated. Of course, it is possible to create different receiving addresses. In reality, the creation of the address can be done safely without having to connect the wallet, but it will not update the balance on the display.

Making transactions is even easier. From the App, go to “Send” and choose the coin to be sent in the upper right corner. The interface will show the address of the recipient (there is also an address verification mechanism), the amount of money to be sent and a convenient slider to choose the value of the transaction fees.

Then click on “Next” to confirm the transaction. It’s not over though. You will have to approve the transaction by pressing the key on the hardware wallet. Perhaps after verifying the recipient’s address directly from the small screen, as it will be displayed. Once the button is pressed, the transaction will actually be transmitted to the blockchain. You can then see all the transactions carried out by moving to the “History” section.

Finally, CoolWallet S offers another feature, namely the ability to take advantage of the ShapeShift exchange to trade bitcoins for Ethereum, Litecoin or vice versa. The quantity to be traded must then be indicated and one of the previously generated addresses must be chosen to receive the cryptocurrencies.

CoolWallet S is a special product, an evolution of the classic hardware wallet, but this time intended for portability, given that it can only be used with a smartphone. For this reason it is difficult to make a direct comparison with the Ledger Nano S. The idea is the following: the Ledger Nano S or the Trezor should be used as a cold wallet for large amounts of cryptocurrencies to be kept in a safe, while a solution like CoolWallet S for a discrete amount to be used for any daily payments in shops or activities that accept Bitcoin, Ethereum etc.. So always to be carried in a wallet, just like a credit card.

Of course, in this context, we could also use a classic software wallet like Eidoo or Coinomi. However, a dedicated solution allows a better level of security to be achieved. Also, for geek users, it is possible to use an OTG cable and operate the Ledger from Android smartphones. However, this is not a very practical and fast solution like the approach adopted by CoolWallet S.

Having said that, overall CoolWallet S is a valid product, in continuous evolution, as can be seen from the official roadmap.