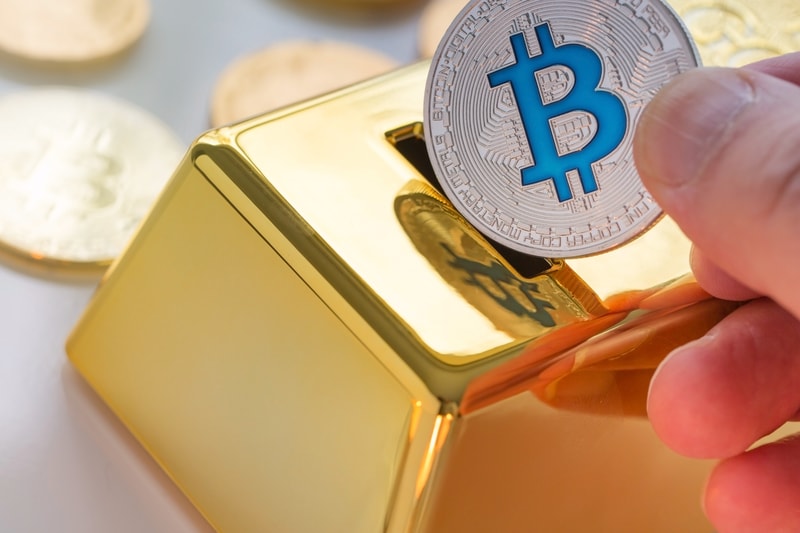 After reaching the peak of the last 15 months, with the capitalisation of the crypto market rising above $350 billion, returning to the levels of last June 2018, yesterday morning profit taking began to prevail, which, in a few hours, triggered a turnaround causing a flash crash with falls between 20 and 30% and significant selling volumes.

The aftermath of the bullish hangover of recent days is still present this morning, with more than 80% of the first 100 coins in negative territory. Of these, 15% experienced double-digit declines.

The worst of the day are Insight Chain (INB) with a -30% on a daily basis, slipping into 78th position, and Aurora (AOA) with a -15% that with just over $163 million occupies the 55th position in the standings.

Among the best known, the most noteworthy drops are those of Tron (TRX), EOS and OmiseGo (OMG), which are 10% below yesterday morning levels. On the other hand, among the 20 in green, XMax (XMX) stands out from the crowd with a leap of more than 27% from yesterday morning’s levels, pushing the token up to the top 100 capitalised. XMax is a token based on the Ethereum blockchain that allows developers to create decentralised games and applications (dApps).

Despite the downturn of the last few hours, the total market capitalisation absorbs the backlash by “only” $25 billion from the highs reached in the last few days.

Much of this is due to bitcoin, which has maintained a market share of over 62%, levels that have been forgotten since December 2017.

On a weekly basis in the top 30 only bitcoin, thanks to the race at the beginning of the week, manages to maintain a positive performance that is close to +20%. Only ChainLink (LINK) and Neo (NEO) are doing better, both climbing about 30% from last Friday’s levels.

In positive territory, there is also Ethereum (ETH) with +6% and Bitcoin Cash (BCH), albeit with difficulty, with a +2%. All the others move under parity.

The descent of Litecoin (LTC) stands out, which, together with EOS, Cosmos (ATOM) and Tezos (XTZ), experience weekly falls in the order of -15%. 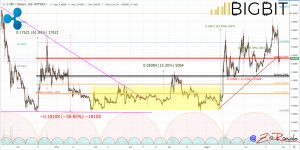 Ripple (XRP) also feels weak with a -5%, returning to test the 40 cents after breaking the 50 cents threshold for a few hours, a level abandoned last November 2018. The trend of XRP now anchored below half a dollar continues to lose ground, falling to 5.3% dominance, the lowest level since August 2018.

The capitalisation of Bitcoin (BTC)

After enjoying the double-digit bullish moments that characterised the 2017 bull run, bitcoin remembers its volatile nature, falling by more than 20% in less than 24 hours. It should not be forgotten that the bullish phases characterised by above-average statistical intensity (currently close to 4% on a daily basis) can be affected by both upward and downward price movements.

In the last rally of 2017, which began in March and ended in mid-December, and which marked a rise that led to a 22-fold increase in prices, there were 6 corrections of more than 25% (in March, July, September, November and December).

At this stage, it is necessary to understand how far the correction will extend and the ability to create a starting point to attract purchases again. In the last bullish phase, in fact, the fast race did not allow to build solid support bases necessary to identify operational levels.

Under the 10500 area, a level that yesterday held back bearish speculation, the next levels are in the 9300 area and then 8800 dollars, levels between 32% and 38% away from the highs reached on Wednesday evening. If the $10,000 threshold is not breached over the weekend, new resistance levels can be assessed.

The market of Ethereum (ETH) today

Slightly deeper is the sinking of the second capitalised one, which in 24 hours is 24% lower than the annual tops scored on Wednesday evening, reaching 363 dollars, levels no longer revised since August 2018.

The downturn did not affect the upward trend that began with the lows at the end of April. In fact, if in the next few days prices are able to stay above the threshold of 250 dollars, the signal will continue to support the positive trend.

The strong increase in trading volumes in recent days, above the average of recent months, if accompanied by new purchases could quickly bring back the prices to the top of Wednesday. If this is not the case, it is necessary to form a basis for consolidation so as not to risk dangerous downward speculation.