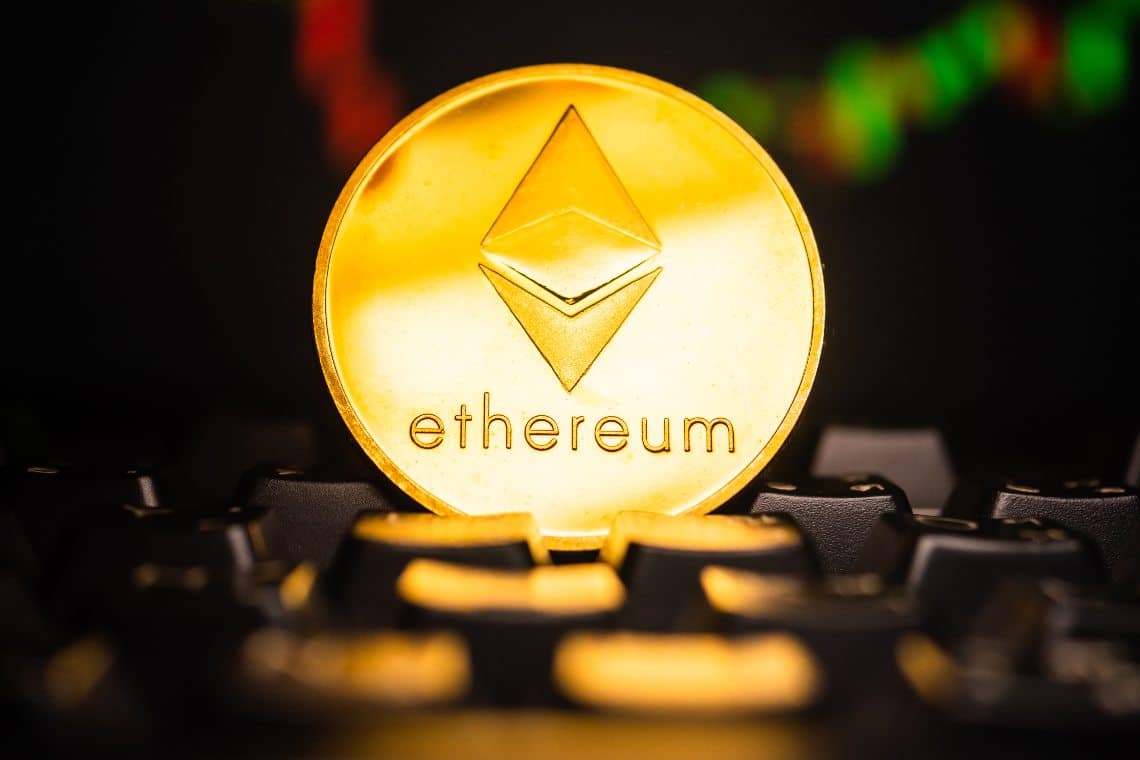 Ethereum on the rise: the price goes back to $270

Today’s day in the cryptocurrency industry sees a sharp rise in the price of Ethereum and new signs of life for Bitcoin.

For the second consecutive day we see a movement that breaks the marginal fluctuations recorded during July. Yesterday, Bitcoin’s prices pushed above $9,600, prices that had not been recorded since June 24.

This is an increase of over 5%. A similar intensity had not been recorded since July 5, when in two days the Bitcoin fluctuations had registered a movement of slightly more than the recent 5.5%.

Also the trading volumes on Bitcoin are rising again, which in the last 24 hours have recorded a countervalue of over 1.4 billion dollars. This is the highest trading volume since July 8th.

In general, there is a return of over $90 billion of trade for the entire sector, with a 15% gain compared to yesterday’s levels. This is an average trade that has not been recorded for several weeks.

However, the lion’s share of the trade is being made by Ethereum, with volumes exceeding 800 million in dollars. It is a peak that has not been recorded since June 11 and it is due to the movement of the Ethereum’s rise which goes up to 270 dollars, levels abandoned about 5 months ago.

With the rise of the night, Ethereum sees a gain of 10% and is third among the best rises of the first 100.

On the top step of the podium is Reserve Rights (RSR) which rises 11%, entering for the first time in the top 100. This is followed by Digibyte (DGB) which gains over 10%, just over ETH.

In the next few hours it will be necessary to find confirmation of the good momentum and the ongoing rises that also involve many of the main altcoins. Chainlink (LINK) leaps 7% to 9th position.

IOTA also rises with an increase of 6%, followed by Stellar (XLM), Bitcoin Cash (BCH) and ZCash (ZEC) who gain 4%.

Bitcoin’s capitalization remains at $175 billion, levels that BTC had already recorded in the second half of June. 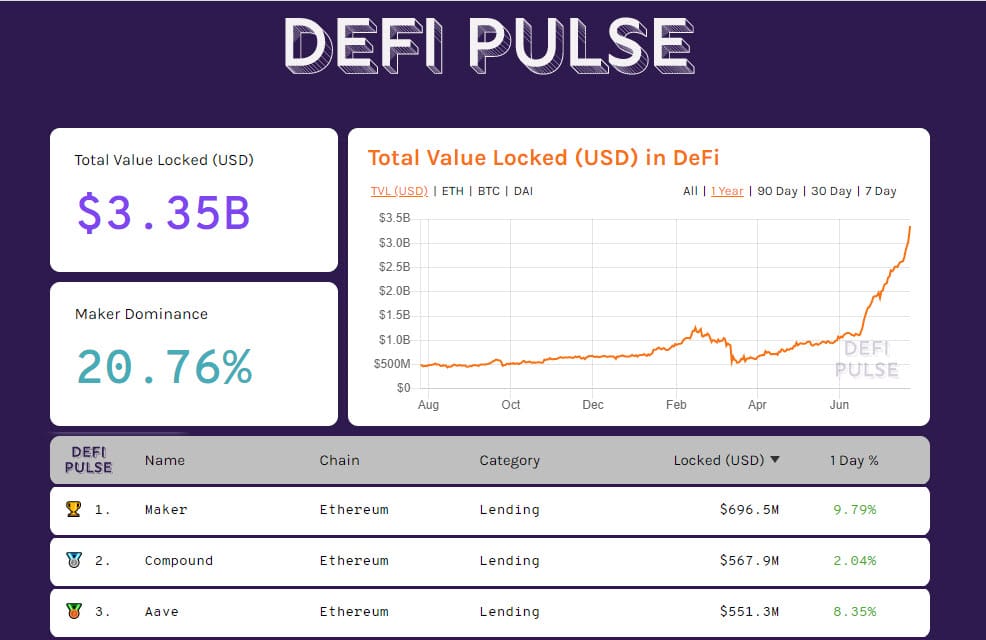 This shows that market movements at the moment are concentrated on altcoins, with the DeFi sector today marking new historical highs for TVL (Total Value Locked), which exceeds $3.15 billion.

Aave (LEND) is still playing a good role, with $551 million dollars now following Compound (COMP) in second position, with a difference of about $15 million between the two. The Queen remains Maker who conquered a few days ago the first position that now consolidates with 697 million dollars.

Aave with the strong rises that saw her starring last week, has brought prices for the first time in 2 years and a half touching 38 cents. After the March lows, the token gained 2,700%. 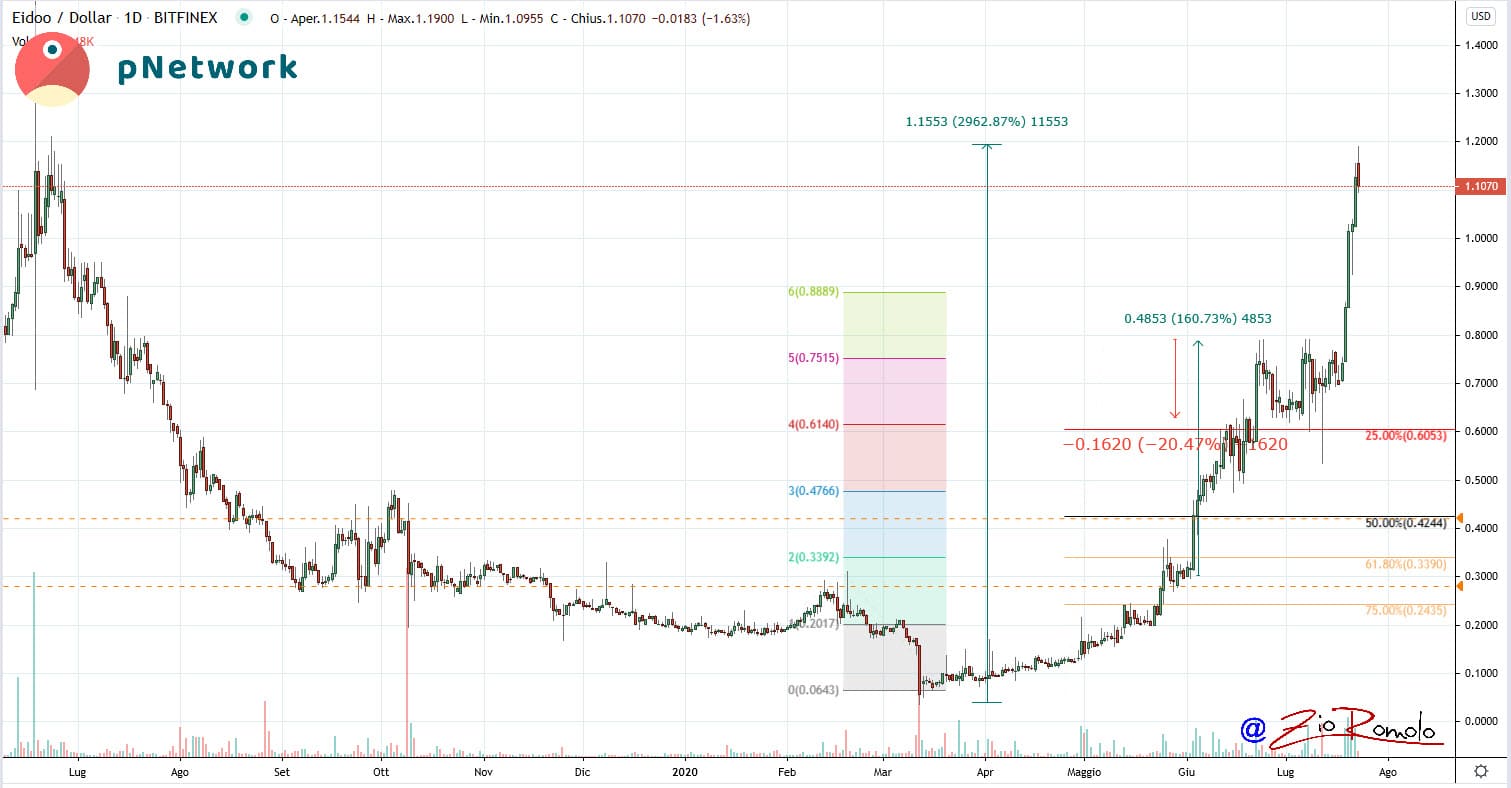 It is a movement similar to the one recorded by the Eidoo token, now PNetwork (PNT), which during the night reached $ 1.20, levels recorded at the end of June 2019. The rise of PNT exceeds the excellent performance of Aave with a gain from the sands of mid-March that multiplies the value of the token by 30 times.

The sparkling climb that records Ethereum in the last few hours brings down the dominance of Bitcoin that breaks the threshold of 62% and drops to the lowest level (61%) that Bitcoin had not seen since mid-February.

This goes in favor of Ethereum that with the high jump of the last 12 hours is brought with arrogance above 10.3%, a level that even Ethereum had not recorded since the end of February. Levels that coincide with the highest highs of the year.

After a month, it was June 23rd, Bitcoin saw the $9,600 again. The movements also affect the derivatives in options. The open interest for options in Bitcoin continues to rise with a total aggregate volume exceeding $1.4 billion. These are the highest levels, second only to the peaks of June 25, when the absolute record was recorded with about $ 1.9 billion.

The positions increase the defenses of $9,800, the relative highs last recorded on June 22. This is the level to break down that currently sees a repositioning of professional operators with full-bodied increases in protection downwards with a ratio of 1:3 between put and call. There are therefore more positions to cover a possible fall with protection of the $9,800 support and protections that increase in volume between $9,450 and $9,200.

The break of area 250-255 dollars that since the beginning of June had six times rejected every bullish attack makes many positions jump to the bottom that push prices to 270 dollars in 4 hours, levels that Ethereum had last recorded on February 24.

Ethereum already in recent days had seen prevailing positions of options with a propensity for more risk, with a bullish hypothesis that at the moment is confirmed by price trends.

The volume of calls fell, with a ratio between call and put of 1:10. The protections rise towards area 235 dollars, a level that coincides with the lows recorded last week.

The open interest on ETH options continues to rise breaking the $210 million wall, the historical record on Ethereum options.

This shows that traders believe in a continuation of the uptrend for ETH, which is one step away from the record for the year in mid-February at $287. A difference with current prices of about 7%. The recovery of the new highs, the second level of hedging of option positions, is getting closer and closer. But the most important level for now is $266.